PISCATAWAY, NJ—In yet another case of a Rutgers University student athlete allegedly assaulting a member of the university community, a recent lawsuit has shined a light on a violent incident involving one of the baseball team’s top pitchers.

It all started on October 18, 2014, when then-19-year-old Rutgers freshman John O’Reilly reportedly returned to the South Tower dormitory on the Livingston Campus in a state of intoxication.

O’Reilly, a graduate of Northern Valley Regional High School at Old Tappan, had yet to pitch for the Rutgers, but was considered one of its top recruits.

But that night, he inexplicably attacked the 25-year old team manager, Albert DeSanto, who subsequently needed surgery to implant a plate and two screws in his spine, according to DeSanto’s lawsuit.

The altercation began around 2:00 a.m. when O’Reilly decided to take a hose out of a janitor’s closet and started wetting the floor. Returning from the bathroom, DeSanto asked not be sprayed and to put the hose away.

O’Reilly then began yelling and ran towards DeSanto “in an aggressive manner,” backing him into a corner.

DeSanto pushed the O’Reilly away from him, which resulted in O’Reilly grabbing a shelf and threatening, “If you put your hands on me again I’m going to give you the worse concussion you ever had,” according to a report written by an investigator with the Rutgers University Police Department.

Two witnesses then stepped in and took the shelf away from O’Reilly. Moments later, O’Reilly put DeSanto in a headlock position from behind as he was heading to his room, lifting him off the ground and injuring his neck.

DeSanto said he still doesn’t know why O’Reilly targeted him, but heard rumors of his behavior while intoxicated. The two had known each other for about a month, he said, and did not have any previous conflicts.

About a year after the attack, O’Reilly pleaded guilty to a reduced charge of disturbing the peace in Piscataway Municipal Court.  A simple assault charge was dropped, and it’s not clear if he was punished at all by the University.

“I find it shocking and disappointing that someone could do something like this and continue on completely unscathed in a school system in this day and age,” DeSanto’s lawyer, Jeff Fritz, told NJ.com’s Mark Mueller.

“The school has a code of conduct that clearly would apply here, yet despite Albert’s attempts to have the school do something about it, he just got turned away every step of the way.”

In an unofficial “Dorm Olympics” competition, DeSanto slammed his head against a cinder-block wall while he was duct-taped to a chair and pushed through a hallway.

DeSanto feels O’Reilly has received special treatment since he is a scholarship athlete, telling Mueller, “I’ve come to the conclusion that the administration acted improperly on this in order to avoid bad publicity and to protect O’Reilly, ultimately at my expense.”

Questioned whether O’Reilly would be punished by the University for his actions and about DeSanto’s claim, Rutgers spokesman E.J. Miranda declined to comment, citing privacy protections under the Family and Education Right and Privacy Act (FERPA).

“As a general rule, and respecting student privacy interests and FERPA legal obligations, the university does not comment on matters involving student discipline,” Miranda said.

O’Reilly even tried to coordinate with witnesses to make sure their stories were the same via email and text by sending them a copy of the statement he was going to submit to RUPD.

At least one witness told Detective Sgt. Joseph Ray of O’Reilly’s attempts to “make sure… that their stories were the same,” showing him the statement they received from O’Reilly, which he had submitted to the police.

“[One witness] stated that O’Reilly also contacted him via text messages and in person to make sure that if he was spoken to by the authorities that their stories were the same,” reads the RUPD report.

“[The witness] then underlined the incorrect portions of the email which he signed and dated.”

Speaking of his son, Michael O’Reilly commented, “Look, it’s an 18-year-old kid in his first semester at college. What do I say? I don’t know why this is news a year and a half later.”

O’Reilly is a double major in criminal justice and labor studies and finished the 2016 season 1-5 with a 5.23 era. after having led the team his freshman season with a 4.35 era.

With 15 appearances last season and 14 this year, it appears O’Reilly has not been suspended from play for his actions, continuing as a starter on the team. 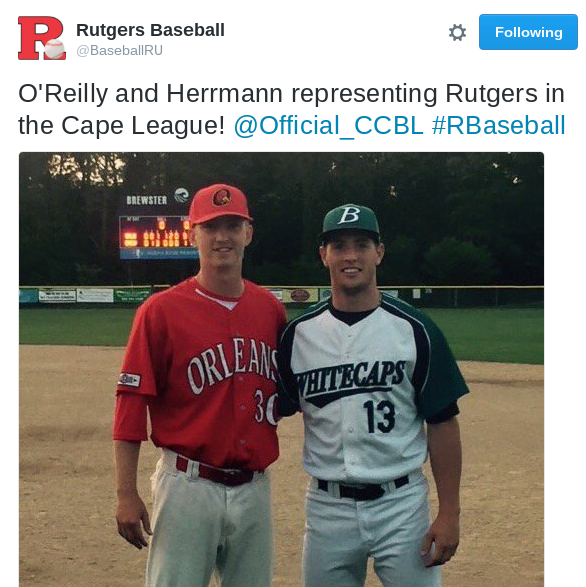 DeSanto’s lawyer has not listed Rutgers as a defendant in the suit, but says it is under consideration.

Among the counts in Randall’s lawsuit were assault and battery, breach of fiduciary duty, negligent and intentional infliction of emotional distress, interference with prospective economic advantage, discrimination, and violations of his civil rights and of the Americans with Disabilities Act and the Rehabilitation Act as a player with learning disabilities.

In September 2015, Leonte Carroo, the top player on the school’s football team was suspended for several games after he was arrested and accused of a violent assault on one of the team’s “hostesses,” paid student employees hired to help recruit high school football players to Rutgers.

Tejay Johnson, Nadir Barnwell, Ruhann Peele, Rahzonn Gross, Delon Stephenson and Daryl Stephenson were charged in an indictment with conspiracy, aggravated assault and riot for the incident, which broke a young man’s jaw.