The start-up brewing company will open in a small 654 square-foot space with a capacity of just 15 people, and will offer tours, tastings, and retail sales.

There will be little change to the building, which previously was an office utilized by the Barrood Agency, which will still occupy two-thirds of the building.

The only major change to the structure is the enlarging of the windows down to street level. 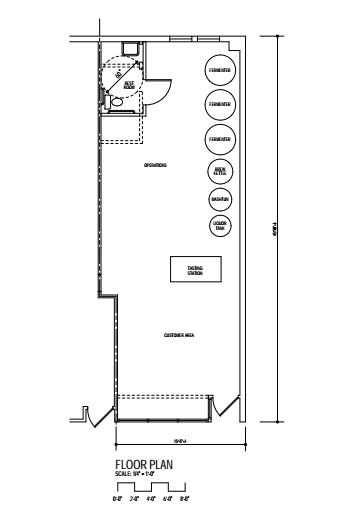 Jersey Cyclone also plans to do wholesale sales to other licensed premises and they hope to sell to local restaurants.

Owner Jan Chwieodosiuk is currently waiting on the brewery’s state Alcohol and Beverage Control (ABC) license which is under review.

Restaurants and bars are permitted within the zone but a variance, which is an exception to the existing zoning code, was needed because the Brewing Company does not have the typical use found in the district.

When the zoning ordinance was drafted, breweries were not included because they were not typically located in downtown areas.

In the past, breweries were viewed as an industrial use but today, many microbreweries can be more closely compared to restaurants or bakeries.

Other cities in New Jersey have permitted similar facilities in downtowns, such as Hoboken, Little Ferry, and Jersey City.

Wayne Ingram, an engineer and planner who testified at the January Zoning Board meeting, concluded that the site is suitable for the brewery as it can be converted easily, it is close to many local bars to sell its products to, and there are no intense truck deliveries or pickups.

Ingram said that having a brewery in downtown is consistent with the purposes of the New Brunswick master plan because the aesthetics of the building will be improved, and it supports other local businesses, encouraging the economic growth of the city.

Paul Breitman, a neighbor who lives across the street in a highrise condominium complex raised various concerns about the impact the brewery would have on the area.

Specifically, Breitman was worried about sale and consumption of alcohol along with increases in pedestrian activity and potential smells emanating from the brewery.

He also raised concerns about customers forming lines and the policies about consuming alcohol on the sidewalk or in front of the brewery.

Zoning Board Chairwoman Nancy Coppola assured Breitman that people would not be able to consume alcohol on the sidewalk because it is prohibited by law.

Chwieodosiuk addressed the issues, comparing the brewery to a liquor store, where people would come in purchase a “growler,” which is a jug of beer, and take it home to consume.

Tastings will occur on site, but do not exceed 4 ounces per tasting.  The tours will be scheduled and will have an educational focus aiming to teach people about making beer and craft beer in general.

Chwieodosiuk assured Breitman that because of the small size of the brewery, the impact from tours, customers, and manufacturing would not negatively affect the community.

The business plan tends to focus more on selling growlers as well as wholesale, which discourages people from queuing on the sidewalk waiting for a tour.

Safety precautions were also discussed and Chwieodosiuk ensured that the brewing mechanisms have safety valves that relieve pressure to prevent explosions or spills.

The quantity of beer brewed would be betwee three and nine barrels per week but they hope to grow production eventually. At the start there will be will be four to six taps.

Grains for brewing will be purchased locally and disposed of at local farms where they can be used for feeding livestock.