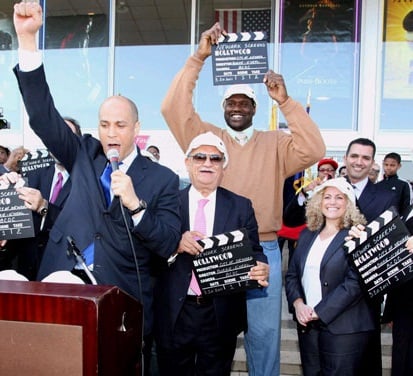 UPDATE (2/5): Contrary to claims made by the Christie administration, it appears that the recipient of the recovery funds has never before provided affordable housing in New Jersey.

The revelation makes the 16-story project, currently under construction between Somerset and Condict Streets, the second such use of Sandy funding called into question this week.

The building, to be named Somerset Mews, has already received a city tax abatement and was approved by the city’s Planning Board eight months before Sandy struck.  In the planning stages for years, it is seemingly unrelated to the superstorm that devastated the Jersey Shore and coastal areas like Hoboken.

Its city-based developer, Boraie Development LLC, has strong political ties to the Governor and new US Senator Cory Booker.  As we reported in April 2012, the Boraie family and its companies have been among New Brunswick’s most generous political contributors over the past several decades.

The Boraies are also among the most powerful property owners in the 5.5-square-mile city, with several office buildings and retail establishments, at least 77 rental units at 23 different addresses, and a 23-story luxury condominium building in their portfolio.

New Brunswick was listed as the 188th hardest-hit town by Hurricane Sandy in a Rutgers University survey, hardly making it a leading contender for the rebuilding funds.

By contrast, Hoboken’s mayor complained in an exclusive interview with MSNBC’s Steve Kornacki that Christie’s administration did not appropriate enough funds and threatened to withhold funding until she approved a massive skyscraper proposed by allies of the Governor.

This is just the latest in a long line of scandals that befell Christie’s administration as he enters his second four-year term as Governor of the Garden State.  Earlier this week, the Star-Ledger reported Christie steered millions in Sandy aid to build a senior citizen complex in Belleville, another town where few buildings were damaged.

The Rutgers study ranked Belleville as the 254th hardest-hit town in NJ, but that didn’t stop Christie from spending $6 million on the senior building.  At the groundbreaking ceremony for that project, the hurricane was only mentioned once in passing.

But that town’s Democratic Mayor Raymond Kimble and Essex County Executive Joe DiVincenzo had endorsed Christie during his landslide re-election.

In the case of the New Brunswick building, it was a former professional basketball player, and not a politician, that gave the Governor an endorsement.

Shaquille O’Neal said he doesn’t often endorse politicians, but Chris Christie was worth it, in a TV commercial promoting the Governor’s 2013 re-election campaign.

O’Neal, a Newark native, and Boraie, who immigrated to New Brunswick from Egypt, have teamed up for several development projects that received millions in subsidies from the state government, and political support from former Newark Mayor Cory Booker.

Booker left the mayor job in Newark after he was elected in a landslide this October, replacing deceased Sen. Frank Lautenberg in a special election made possible by a controversial Christie decision.

Booker’s Senate campaign office in New Brunswick was on the ground floor of 120 Albany Street, another Boraie building.  Representatives for his campaign and Senate office never responded to questions about how much, if any, rent was paid for the office.

Anthony Marchetta, the head of NJ’s Housing and Mortgage Finance Agency, told NBC that the building deserved the funds because 48 of the 238 apartments will be affordable and advertised to Sandy victims.

“We made an announcement to the development community that if you have any projects in those nine counties [where an emergency was declared] that would generate affordable housing, bring ’em on.”

Marchetta is a blood relative of Russell Marchetta, the spokesman for New Brunswick’s Mayor James Cahill. Neither Marchetta has responded to inquiries from New Brunswick Today.

Middlesex County was hit hard by Sandy, but serious flood damage occurred mostly in communities near the Raritan Bay, including Woodbridge, South River, and Sayreville.

The Governor has also been embroiled in scandals related to the use of Sandy aid for TV commercials featuring himself and his family, and on a questionable politcally-connected contractor based in Florida to dispose of debris.

Just last week, WNYC reported that Christie’s administration had quietly cancelled its largest Sandy relief contract with the out-of-state company in charge of administering the distribution of Sandy-related funds.