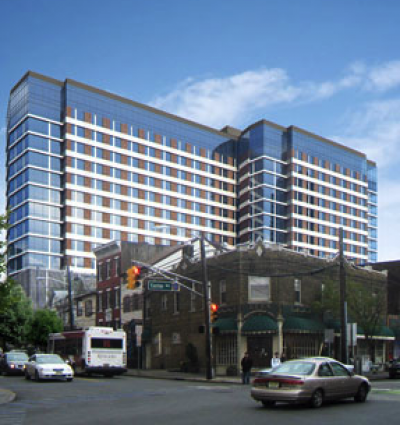 NEW BRUNSWICK, NJ—This Tuesday, several residents of New Brunswick’s 5th Ward neighborhood are expected to attend a public meeting where the city’s Planning Board will decide on an application filed by Boraie Development LLC to build a new mixed-use apartment building.

The application’s fate will decide whether eight houses, four each on Somerset and Condict Streets, will be demolished to make room for 238 apartments, 237 parking spaces, a health club, and an 8,800 square foot retail store.  All eight of the existing homes are owned by Osman and Magda Boraie, of Milltown.

An informal survey of residents who were at home Sunday afternoon revealed that both younger renters and longtime homeowners had varied feelings on the plan.  Younger student-types were either excited at the prospect of new housing construction or did not have an immediate opinion on the plan.  All but one said they were planning to re-locate outside of the city in a few months .

Homeowners were more skeptical, but one man acknowledged the potential for increased property values in the neighborhood.  Another homeowner said he would be not be attending Tuesday’s meeting because he believed City Hall to be corrupt.  Every homeowner we talked to assumed the development would move forward, regardless of any opposition from residents.

Nevertheless, of the few remaining homeowners in the immediate vicinity of the proposed development, most said they would attend Tuesday’s meeting.  And one of the younger residents said he might attend as well.

Their biggest concern was the added traffic from the new building’s 237-space parking garage, which would have an entrance and exit on Condict Street.  Somerset Street and Easton Avenue both experience daily gridlock during rush hour.

The city’s planning board will decide whether or not to grant three variances, basically exceptions to the city’s planning code.  For instance, one of the variances asks to board to allow the building to exceed the allowable height of 150 feet to reach 159.6 feet.

In 2005, Boraie developed a 23-story mixed-use tower in downtown named One Spring Street.  That building, at the intersection of Paterson and Spring Streets, reached 281.5 feet, making it the tallest in the city at the time.

Boraie did not return telephone messages from NewBrunswickToday.com asking about the new project.

Should the building be approved and constructed, it will be the third in the city to take advantage of the state government’s Urban Transit Tax Hub credit, a discount designed to encourage development around NJTransit rail stations.

Just 100 yards from the site of Boraie’s proposed apartments lies the Gateway Center, which surpassed One Spring Street as the city’s tallest building and opened earlier this year thanks in part to a $76.6M tax break from the NJ Economic Development Authority.

Boraie’s planned building was one of only thirteen to be awarded credits thus far in the relatively new state program.  According to a table of the approved projects on the NJEDA website, the project represents the fourth lowest capital investment ($19.9M) of all thirteen projects, but boasts the second-most jobs created.

The table says that the building will cause the creation of just 50 permanent jobs, but a whopping 1,000 construction jobs.

The tax credit program did not exist when the developer built One Spring Street, a luxury high-rise condominium complex with a rooftop pool and garden, gym and recreation area, and balconies for every unit.

Marketed as a New York City building at New Jersey prices, this building had 121 condominiums for sale, as opposed to the rental units planned for the site in question, 135 Somerset Street.  Most of the units at Spring Street were snatched up in August and September of 2006, at the height of the housing market bubble.

Though the building was promoted by local officials as a potential force to improve the city’s dismal home ownership rate, the developer does permit its condo owners to lease their units and many of the tenants may actually be renters.

An analysis of property sales records shows that 1 in 5 units are owned by people or famillies that own multiple units in the building.  Records were only available for 111 of the 121 units on MyCentralJersey.com’s DataUniverse.

The Boraie family owns 72 residential rental units at 22 different addresses in the City of New Brunswick.  In addition to the properties in question, the family owns homes on Hamilton, Comstock, Handy, Townsend, Talmadge, Redmond, Harvey, Loretto, and Courtlandt Streets, as well as Livingston and Remsen Avenues.

In addition, the company owns several commercial properites in the Hub City, including the buildings that house Chipotle and Harvest Moon restaurants on George St.

Albany Street Plaza, one of Boraie’s first major redevelopment projects, is located at 120 Albany St. and consists of two office towers built across from the city’s train station.  In addition to high-profile office tenants like SmithBarney, the buildings also house the Saladworks and Ginger ‘n Olive restaurants, a Wells Fargo bank branch, and a clothing store.

The company has branched out in recent years, cutting deals with retired basketball star Shaquille O’Neal to build in Newark, O’Neal’s home city.

Boraie Development LLC’s website lists four major residential projects, including the Somerset-Condict proposal, though only one has been built: Spring Street.  The other two projects have been stalled for years and may never become a reality.

Their controversial plan to redevelop Milltown’s abandoned tire factory has been held up for years due to litigation and public opposition.

A proposal for a highrise housing tower slated for Newark, One Riverview At Rector Street, is also advertised on the site, even though it fell through years ago despite a $13.3M tax credit from the EDA.

Boraie again teamed up with O’Neal to renovate and expand Newark’s only movie theatre, in a partnership with Goldman Sachs.  The theatre, Newark Screens, opened earlier this year, according to a report on TheRealDeal.com.

The page on the site for their latest New Brunswick proposal is simply labeled “Somerset Street, New Brunswick, NJ.”  It lists conflicting numbers of units in the building: The main page says 200, but leads to a link that says 238, the same as the application filed with the Planning Board.

In their application to the board, the number of parking spaces is often quoted at 260, but in the public notice, the city makes clear the proposal is for a 237-space garage.

And one would be wise to double-check the company’s math.  The Spring Street project was already built when the city discovered it had 25 less parking spaces than were promised in the attached seven-story parking garage, according to a 2006 article in the Newark Star-Ledger.

In part because of this broken promise, the building’s deck does not offer any public parking spaces.  It was originally supposed to include 86 metered spaces for the general public as a way to replace a surface parking lot that was originally on the site.

And it’s not like they can’t afford to share some of the seven-story deck with the public.  Shortly before sunrise this morning, NewBrunswickToday.com counted 137 cars, two motorcycles, and five bicycles.  In other words, the deck was at least two-thirds empty.

This means that, even at peak usage, the parking deck sits more than half empty in the heart of downtown, yet remains closed to the public.

Although the offices at One Spring were rented swiftly by businesses such as the accounting firm Withum, Smith & Brown, and most of the condo units sold quickly, the building has only two retail tenants.

Both retail tenants moved in last year, more than five years after the residential portion of the building first opened.  A new restaurant, The Panini Place, now calls One Spring Street home, as does an eyeglasses store, Optical Boutique, that was re-located from its George Street location to make way for a restaurant that never came.

However, two other retail spaces remain vacant between the now-closed Court Tavern and the parking garage, as well as at the corner of Paterson and Spring Streets.

The Spring Street building originally was designed to overtake the Court Tavern, but hundreds of residents turned out to a City Council meeting in 2001 and convinced the Council to amend their plans to preserve the famous rock club, which closed earlier this year.

One project that doesn’t appear on Boraie’s website is the headquarters of the Middlesex County Sheriff’s Department at 701 Livingston Avenue.

The department was headed for 30 years by elected Sheriff Joseph Spicuzzo, who was arrested last year and charged with bribery.  He is alleged to have sold investigator jobs for $25,000 each.

The building, constructed by Boraie, was named for Spicuzzo when it was dedicated in 2005.  The county government leases the building from Boraie for $432,000, as part of a ten-year lease agreement.

Boraie contributed the maximum allowable amount to Spicuzzo’s campaign in 2007, as he did for all county-level Democrats running on the ballot.  According to the Star-Ledger, Boraie’s company was one of six that gave donations of $2,600 to Spicuzzo and four other candidates that year.

Spicuzzo served as the Chariman of Middlesex County’s Democratic Organization until the day he was arrested in March 2011.

Spicuzzo twice sold foreclosed condos at One Spring Street, in his capacity as Sheriff.

*****PUBLIC MEETING INFORMATION*****
Empower Our Neighborhoods, the organization that started NewBrunswickToday.com, will be hosting a community meeting this Tuesday, March 20 at 6:30pm at 75 Paterson Street.  The meeting is open to the general public.

From there, those interested in attending the Planning Board meeting on Boraie’s proposal can walk to City Hall (78 Bayard St., top floor) at 7:30pm.  Any member of the public is permitted to make comments and ask questions about the proposal.