More than three years later, only one of the six athletes identified in the video has spent significant time behind bars, and that’s only because he faced an expensive bail on unrelated charges he robbed drug dealers in a string of armed home invasions.

In 2016, a Superior Court Judge gave the athlete who landed the most devastating blow in the streetfight a small fraction of the jail sentence that had been agreed to as part of a plea bargain.

Five football team members were suspended from the Scarlet Knights after being charged with aggravated assault, disorderly conduct, and conspiracy on September 3, 2015, more than four months after the April 25 incident that left at least one man with serious injuries.

One of those athletes, and several other Rutgers football players who did not participate in the violent incident, were also charged with conspiring to commit several armed robberies in the same neighborhood, and a failed robbery attempt at a dormitory in Piscataway. 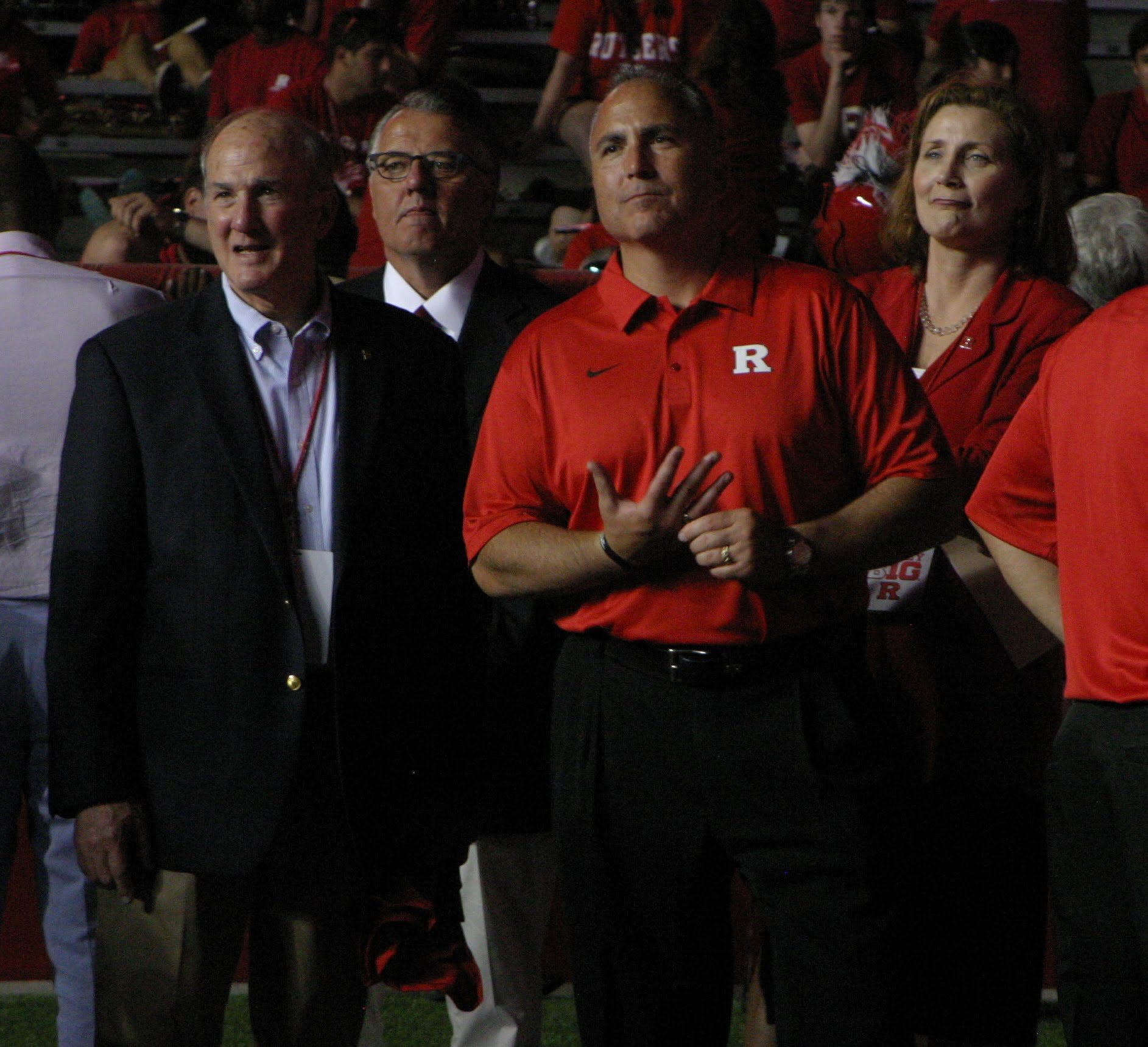 It was all part of an astonishing scandal that eventually led to the dismissal of head football coach Kyle Flood, who violated National Collegiate Athletic Association (NCAA) regulations by pressuring a Rutgers teacher to give special treatment to Nadir Barnwell, a defensive back shown throwing punches in the video.

Athletic Director Julie Hermann also found herself out of a job after the disastrous 2015 football season, and the wide-ranging scandal also led to the departure of Rutgers longtime Chief Medical Officer, Robert Monaco, who repeatedly violated the school’s policy for drug testing student athletes by allowing football players to face no consequences after testing positive.

The one minute and twenty second video was released by the Middlesex County Prosecutor’s Office (MCPO) in response to a March 19 request for records from multiple unrelated cases. The video of the streetfight was received by this newspaper on May 4.

In addition to the “raw video” shot on a mobile phone, the MCPO also provided an “annotated” version that identifies the six men who were indicted in the case, all of whom played football for Rutgers at some point.

The annotated version also identifies one of their many victims by name.  Not all of the victims and perpetrators are identified, however, and it’s unclear if all of the assailants faced criminal charges.

According to the video, Daryl Stephenson, a defensive lineman who left the football team shortly before the incident occurred, appears to throw the first blow during the daytime melee on Delafield Street.  Prosecutors said the fight stemmed from an argument over a parking space.

Prior to the altercation getting physical, several of the men can be heard repeatedly asking, “Who got a knife?” 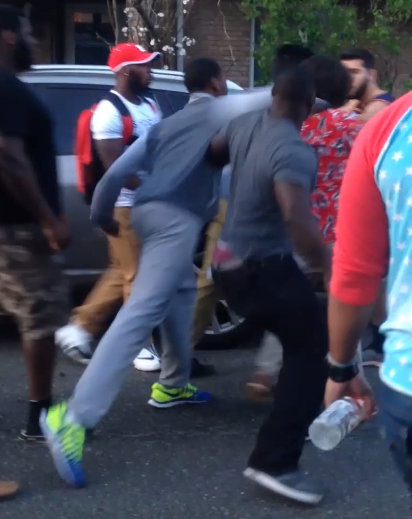 The second man to throw a punch during the dispute is not identified by name in the video, and it’s not clear if he was affiliated with Rutgers or the football team, though he took the side of the student athletes throughout the fight.

It’s also not clear whether that man faced criminal charges, even though he later is depicted in the video kicking another victim who is lying on the pavement.

A spokesperson for the MCPO did not immediately respond to our questions about whether the unidentified assailants in the video were ever charged.

After the mystery man punches one victim in the back of his neck, Stephenson then throws another punch at a different man, missing him and stepping out of his own shoe.

Seconds later, Stephenson’s younger brother Delon Stephenson, a defensive back for Rutgers, darts out from between two cars, blindsiding the man who had just been punched in the neck with a blow that likely broke his jaw.

That victim, identified as Ernest Scoma in the annotated version of the video, falls to the pavement after the punch, and chaotic fighting breaks out.

Prosecutors said Delon Stephenson’s punch sent Scoma to the hospital for two days, where his jaw was wired for the next eight weeks, according to a report on NJ.com. 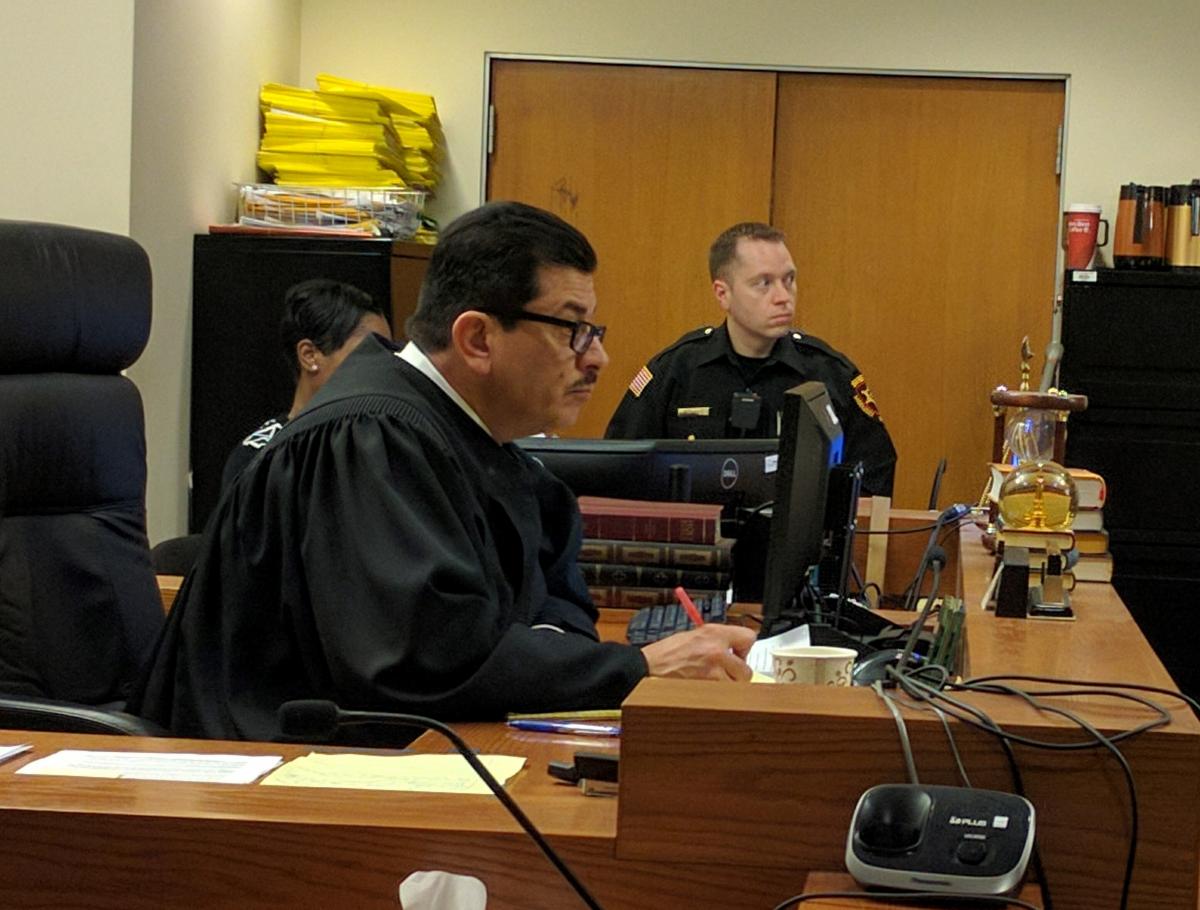 But Delon Stephenson was only in jail slightly longer than his victim was in the hospital, after Judge Dennis Nieves ignored the recommended sentence that was part of a plea deal reached between prosecutors and Delon Stephenson’s attorney, Michael Orozco.

On July 1, 2016, Nieves instead opted to jail Delon Stephenson for just three days, less than one-percent of the sentence that had been agreed to.

“You’re going away for a couple of days just so you can consider, seriously consider, the harm you did to another human being,” said Nieves, emphasizing the symbolism of the defendant’s release being scheduled for Independence Day.

Nieves also said that what was depicted in the video was “terrible” and “bizarre.”

The video shows Scoma getting up quickly after the damaging blow, only to be struck at least once more before escaping the melee. 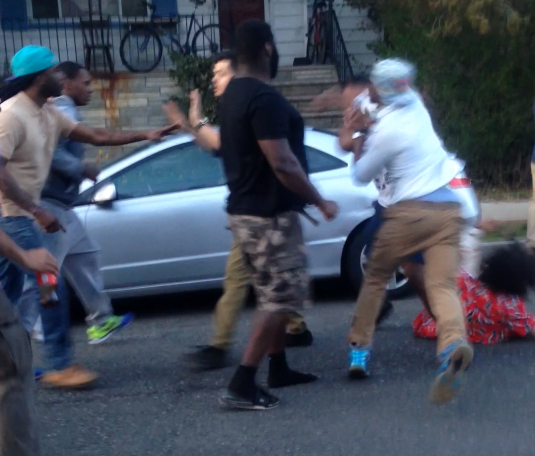 As the violence quickly escalates, Barnwell is shown striking another man twice in the face before Daryl Stephenson steps in to join in that attack.

Meanwhile, the unidentified perpetrator teams up with Rutgers fullback Razohnn Gross to fight another man, with Barnwell quickly joining in to punch that man as he is pinned up against a parked car.

At this point, another man falls to the ground and is repeatedly kicked in the head by someone whose face is not captured in the video.  Again, it’s unclear if criminal charges were filed against the mystery attacker.

Another unidentified individual steps on the downed man, while the mystery attacker who punched Scoma in the back of his neck joins in kicking the new victim while he is down.

Daryl Stephenson, still wearing only one of his shoes, and a woman who soon enters the scene, each appear to call off the violence, as the man gets up from the pavement and escapes, bumping into an occupied car on his way to the sidewalk. 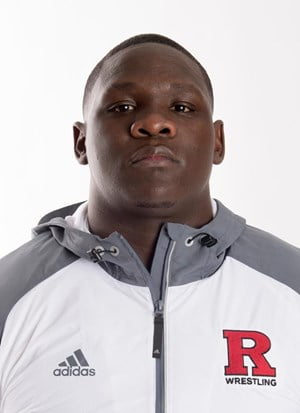 Daryl Stephenson, Gross, and Barnwell were each admitted into the state’s pre-trial intervention (PTI) program, which allows first-time offenders to avoid consequences including having a criminal record.

Gross continued his studies at Rutgers, and even secured a second chance from the school’s Athletics Department, joining the wrestling team in 2016 and being welcomed back to the football team briefly in 2017.

He participated in spring tryouts and played in the Annual “Scarlet and White” spring football game last year, but opted to focus on his wrestling career instead.

Meanwhile, Ruhann Peele admitted to throwing at least one punch during the streetfight but might have also been able to escape without a criminal record if he had only been able to stay out of trouble in the aftermath of the initial charges.

But, just six weeks after the high-profile arrests shook the campus, Peele punched another man in the face at the intersection of Easton Avenue and Mine Street, within view of a coffee shop’s security cameras.  New Brunswick Today has recently requested all videos of that incident as well.

Neither of the incidents were Peele’s first time on the wrong side of the law, apparently. Peele had been charged with pulling a woman’s hair and scratching her face in 2014, but those charges were dropped and he remained on the team after the alleged victim failed to appear in court.

Previously a wide receiver, Peele was set to start playing defensive back during the 2015 season, but he never played again and left Rutgers after his third arrest.

Ultimately, Judge Nieves sentenced Peele to three years probation on September 30, 2016, even though the punch he landed broke Kevin Finnegan’s nose and jaw, and ruptured his eardrum.

Prosecutors characterized Finnegan as an “innocent bystander who was out with his friends,” according to a report on MyCentralJersey.com.

Like Scoma, Finnegan was unable to eat solid food for several weeks while his broken jaw healed.  Both men asked for thousands of dollars in restitution for their medical bills.

The report noted that Peele’s attorney, Joseph Benedict, said that his client “felt threatened” after being recognized prior to throwing the punch that seriously injured Finnegan.

Both Peele and Delon Stephenson are currently serving three-year sentences of probation.  Peele was reportedly training in the hopes of re-launching his football career at a smaller college, according to NJ.com’s Ryan Dunleavy. 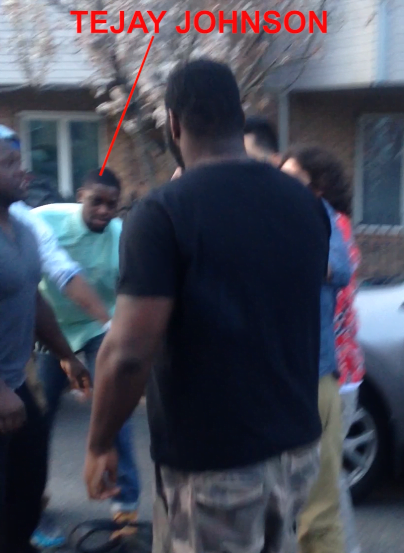 Tejay Johnson, formerly a defensive back for Rutgers, is the only one of the six men charged who has not yet been sentenced, and the only one to have already spent significant time behind bars.

He was held at Middlesex County’s jail for months on an expensive bail before Judge Nieves eventually lowered it and he was released pending trial.

He had been facing more than 150 years in prison if convicted, but shortly before the trial was set to begin, Johnson pleaded guilty to numerous charges under an agreement reached between prosecutors and his attorney Ian Goldman.

The MCPO announced on January 8 that Johnson had pleaded guilty to his role in three separate home invasions targeting other members of the Rutgers community, and in two cases, robbing them of drugs and cash.

Like Peele, Johnson also had a checkered past that didn’t stop him from playing for the Scarlet Knights.

According to court records, Johnson was charged with simple assault and robbery in two seperate incidents just two weeks apart in his home county during the summer of 2013.

A native of Egg Harbor Township, Johnson was able to avoid serious consequences from those charges, with the simple assault case being remanded to municipal court and the robbery charge was administratively dismissed in Atlantic County Superior Court.

Under the plea deal, prosecutors will recommend a sentence of fifteen years in state prison, subject to the No Early Release Act, which would require Johnson to serve at least 85% of the term before becoming eligible for parole.

As part of the agreement, the charges against Johnson stemming from the Delafield Street assault was dismissed.  The video does not show him throwing any punches or kicking anyone.

Johnson is set to be sentenced by Judge Nieves at 9am on June 22 at the Middlesex County Courthouse in downtown New Brunswick.