The Middlesex County Prosecutor’s Office (MCPO), which is still working with the crooked cop to make other cases, has managed to keep the full extent of Barcheski’s crimes largely under wraps.

Unlike most cases involving police officer defendants, the MCPO did not issue a press release upon Barcheski’s guilty plea, nor did they outline a timeframe of when his crimes occurred. 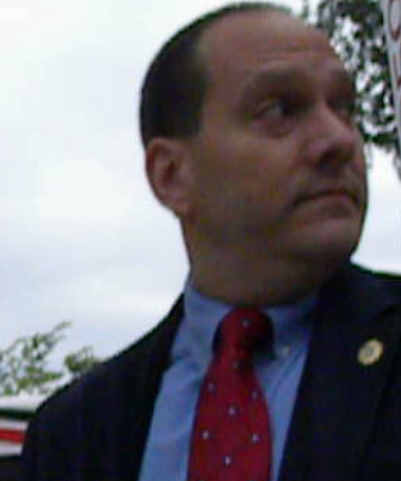 But New Brunswick Today has obtained court records that show Barcheski admitted to taking both money and heroin from the SAPD’s evidence locker between January 1, 2014 and February 8, 2017.

An inside source said that the State Police had tested drugs contained within the department’s evidence unit, finding that someone had replaced the heroin with “fake powder.”

Count four, tampering with evidence, makes reference to Barcheski devising, preparing or offering “envelopes formerly containing Heroin re-taped to look like full envelopes of Heroin, knowing them to be false.”

In addition to forfeiting his public employment and making restitution in the amount of $15,860.30, the plea deal also calls for Barcheski to “actively co-operate w/ MCPO in the prosecution of all pending South Amboy matters.”

Even though he still pleaded to charges that could lead to a maximum sentence of more than sixteen years in prison and fines of over $55,000, the proceedings before Judge Toto reveal that Barcheski may be destined for “drug court,” a program meant to steer addicts towards treatment in leiu of prison. 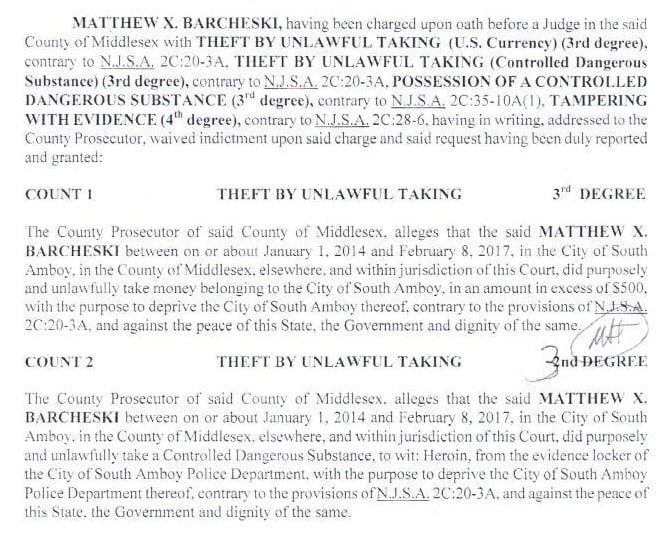 The accusation that Barcheski pleaded guilty to reveals that one of the theft counts was originally listed as “2nd DEGREE” before being altered to read “3nd DEGREE.”

At a court appearance on February 23, one Assistant Prosecutor called for him to be drug tested not long after another AP greeted him warmly with a hug and referred to him as “honey.”

Barcheski began his law enforcement career with the notorious Middlesex County Sheriff’s Office in 2003, during the reign of corrupt ten-term Sheriff Joseph Spicuzzo, who pleaded guilty to selling cop jobs in 2012.

It’s not the first time that Barcheski, who joined the South Amboy PD in 2005 and served as a member of the county’s Special Operations Response Team (SORT), finds himself on the wrong side of the law.

In 2007, he faced criminal charges of aggravated assault and harassment, but the charges were administratively dismissed.  It’s unclear if the charges, which came out of the City of South Amboy, were related to his job as a police officer.

Nevertheless, Ziegelheim insisted he had no knowledge of the 2007 charge saying, “I think you got bad information.”

After a scheduled hearing on April 20 was cancelled without explanation, Barcheski’s next scheduled court appearance is for sentencing on May 17 before Judge Robert Jones.