NEW BRUNSWICK, NJ—For the first time in years, the city’s Housing Authority has opened up one of its waiting lists and quietly begun taking preliminary applications for two-bedroom apartments.

The New Brunswick Housing Authority (NBHA) website does not reflect this, however, stating that “Waiting lists for Section 8 and Public Housing are currently closed.”

But an official confirmed what was first reported in a public notice placed in the February 9 and 10 issues of the Home News Tribune, indicating that the authority plans to select 200 families by way of a lottery drawing to join the agency’s waiting list for public housing in the Schwartz Homes and Robeson Village neighborhood. 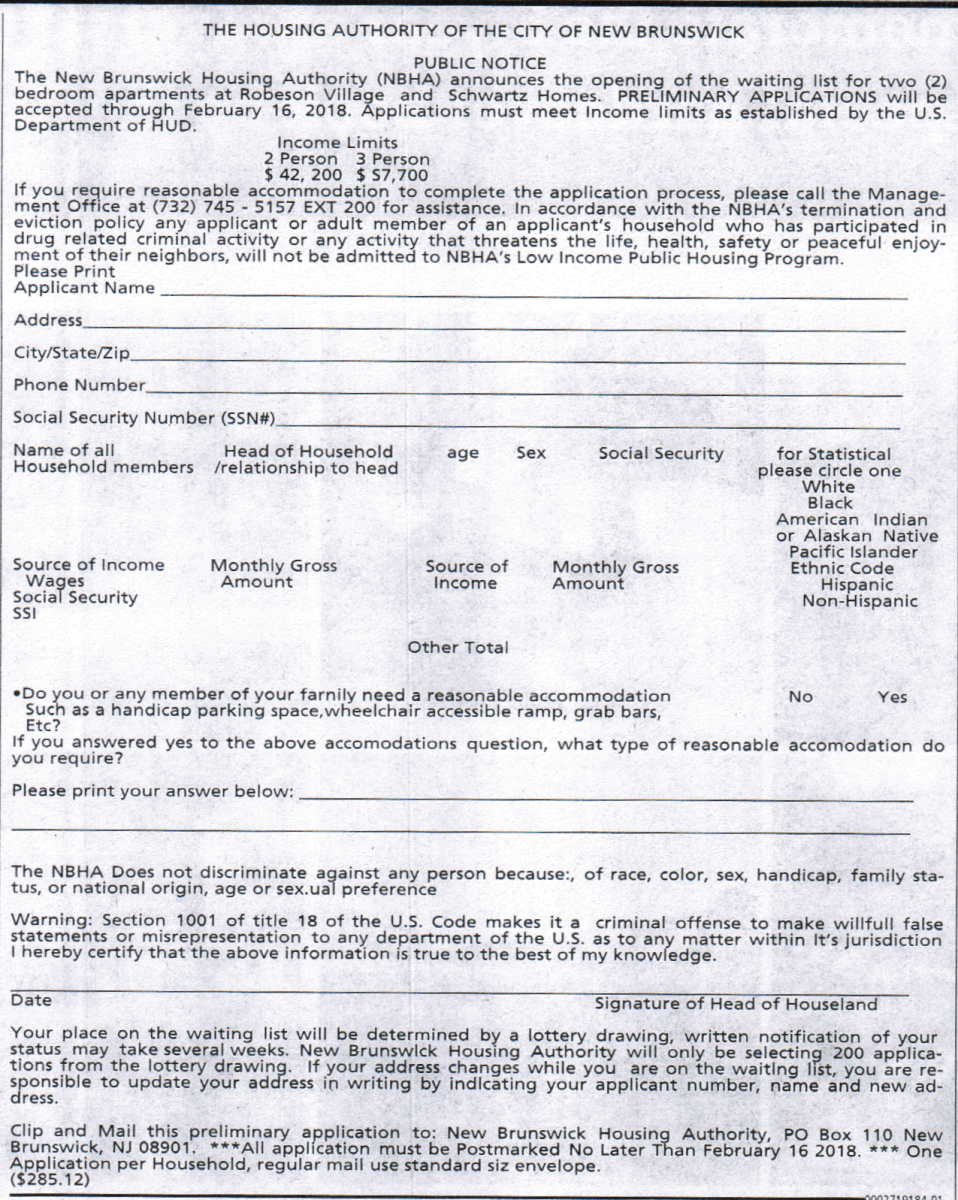 “You can only apply in the paper,” explained Eato-White, advising this reporter to get a copy from the public library.

“We can’t [provide applications], because that’s against [US Department of Housing and Urban Development (HUD)] rules,” said Eato-White.  “HUD says you have to advertise in the paper, and we cannot dispense any applications.”

The unexpected news comes amid growing concern over the NBHA’s management from the federal government, this newspaper, and their own tenants.

As we reported last year, the agency was the subject of a scathing audit conducted by HUD’s Office of Inspector General (HUD-OIG) that questioned over $1.4 million in NBHA spending.

That audit recommended that the agency’s capital funding be cut as a punishment. 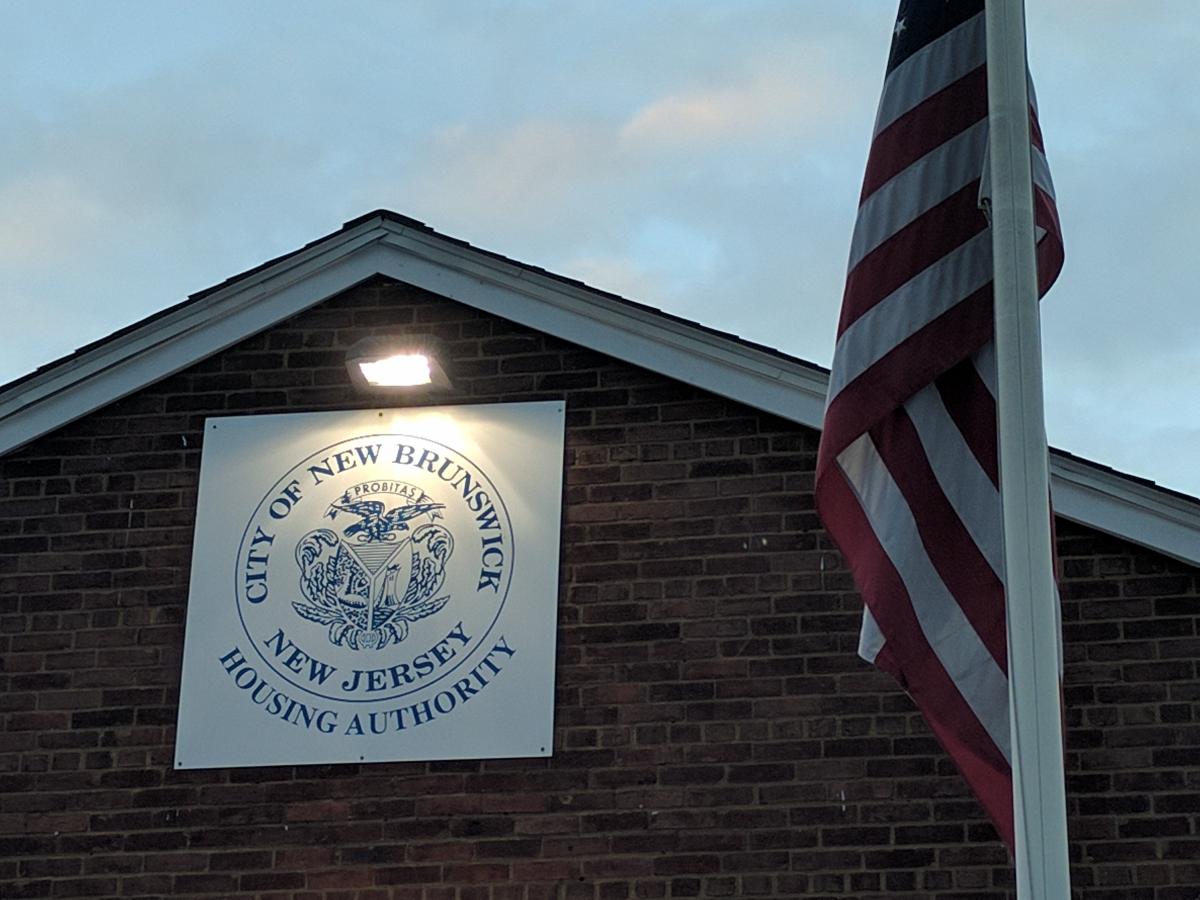 Meanwhile, reports in this newspaper have shined a light on the NBHA’s dysfunctional Board of Commissioners, including one member who threatened this reporter with physical violence in November, and four others who left office prematurely since 2015.

For their part, the residents of the Schwartz-Robeson neighborhood have become an increasingly powerful force at the board’s monthly meetings, showing up en masse and raising a multitude of concerns about maintenance and management policies in recent months.

So far, the NBHA’s waiting lists maintained by the authority have been kept secret, “deemed confidential” by their Hoboken-based lawyers despite repeated requests from this newspaper to see them.

It’s part of a pattern where the agency frequently denies requests for public records, sometimes without a legal basis to do so.

For example, after the HUD-OIG audit was released in September, the NBHA denied requests from New Brunswick Today to release the their “corrective action plan” which New Brunswick Mayor James Cahill had cited in his own efforts to downplay the severity of the audit report.

It’s a mystery how much the same lawyers who initially denied our request for that public document have been charging the authority, which has not yet provided Manfredi & Pellechio’s bills despite a proper request for them filed by this newspaper on December 18.

The agency keeps at least three waiting lists for its public housing neighborhoods, and a separate one for its “Section 8” housing voucher program, which provides a rent subsidy for nearly 1,000 low-income families to rent private housing.

In February 2016, NBHA Executive Director John Clarke told New Brunswick Today that the Section 8 waiting list was about 3,000 families long.  The authority’s website has said that it is “NOW SERVICING: Section 8 Applications #750 – #950” ever since.

It’s largely a guessing game as to the status of the other lists, which correspond to the different public housing properties owned by the authority, the largest and oldest of which is Schwartz-Robeson. 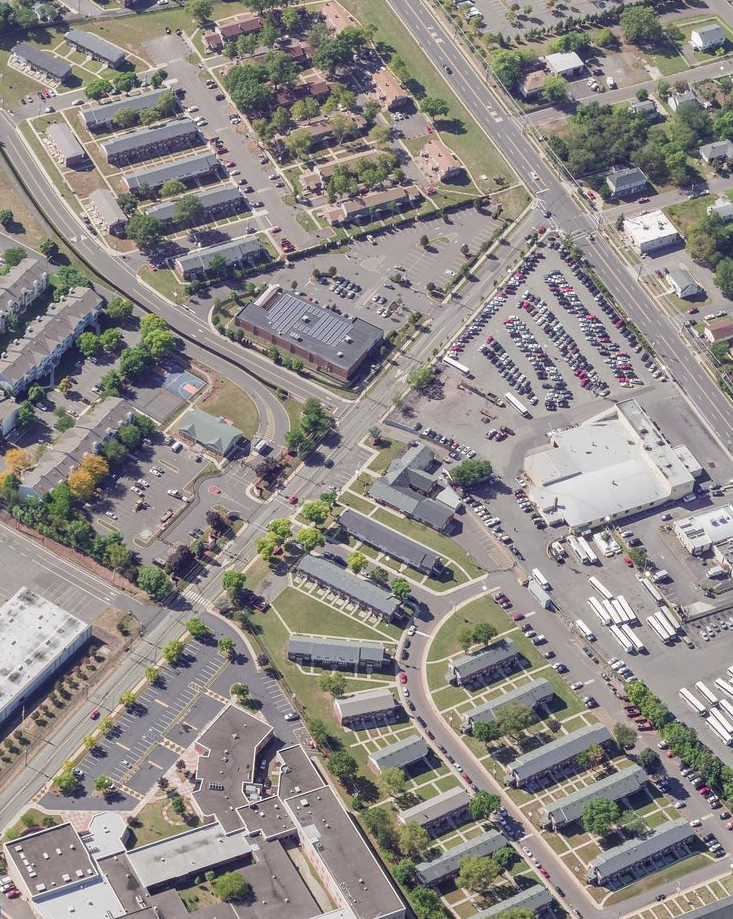 In April 2016, Clarke told us that there were “223 total families” on the waiting list for Schwartz-Robeson and that the agency was “about 1/3rd into the list, depending on bedroom size.”

Cahill’s office also did not respond to a request for comment on the application process, and the incorrect information about the waiting list on the NBHA website.  He has held the city’s highest office since 1991.

The lack of transparency surrounding the NBHA’s waiting lists, which are supposed to prioritize “transfers” of units to accomodate growing families, have been a source of consternation for some of the agency’s tenants.

“[I’m] still in a two-bedroom.  My boy is four years old, about to be five,” she said at the November 15 NBHA meeting.  “Why am I still in a two bedroom and I’m seeing other families… moving into three and four bedrooms?”

“I put my name on the list the same week he was born.  They said I was number 10 on the waiting list, and… I’m still at number 10 four years later.  Something is not right.”

Meanwhile, it’s an open secret around the neighborhood that Eato-White’s son, who spent eight years in prison on convictions for armed robbery and drug possession, has allegedly been living off the books in an apartment ostensibly leased by his girlfriend, who received a transfer from a two-bedroom unit to a three-bedroom unit in 2014.

The notice printed in the Home News warns others that “any applicant or adult member of an applicant’s household who has participated in drug related criminal activity or any activity that threatens the life, health, safety or peaceful enjoyment of their neighbors, will not be admitted to NBHA’s Low Income Public Housing Program.” 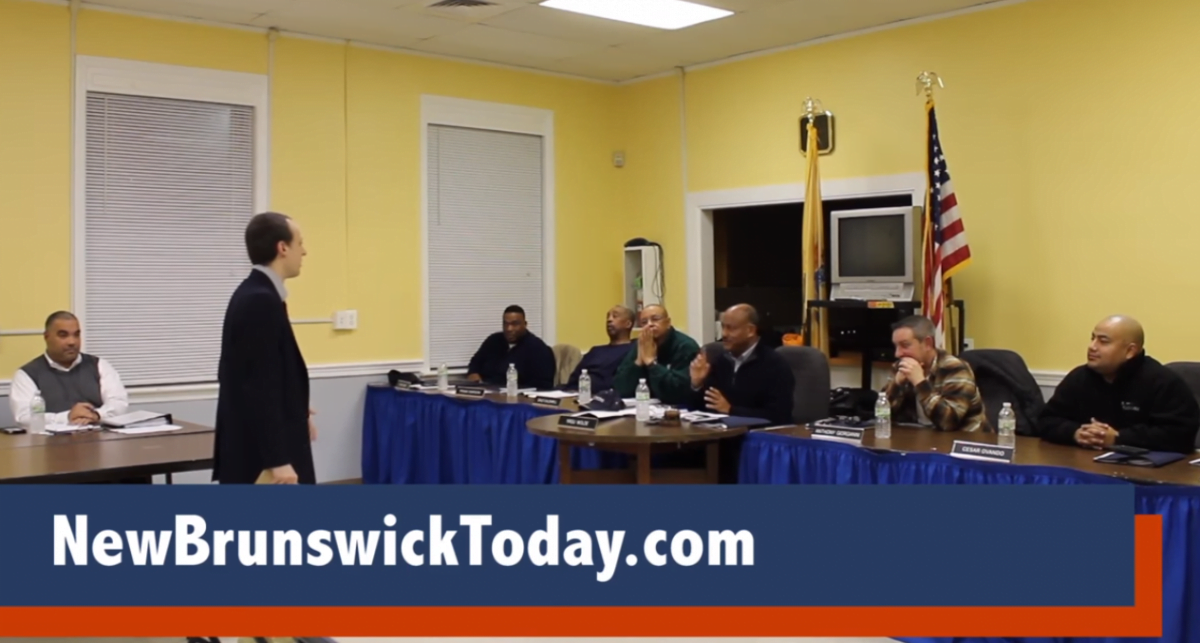 New Brunswick Today first raised the issue of Eato-White’s son living in the complex back in February 2016, first to Clarke and then to the NBHA Board.

One member of the board, Dale Caldwell, demanded to know the name of the person allegedly living there illegally, shouting back at this reporter: “You are doing a disservice to the public!”

But, nearly two years later, the NBHA’s top officials claim ignorance as to whether or not Eato-White’s son is living in the Schwartz-Robeson neighborhood.

“I don’t know enough to know [if Eato-White’s son is living in the NBHA’s public housing],” said Caldwell, who also became President of the New Brunswick Board of Education in 2017.

Shortly thereafter, in the same video, Caldwell’s fellow board member Yirgu Wolde threatened to knock out this reporter.

The next New Brunswick Housing Authority Board of Commissioners meeting is scheduled for one week later, on February 28 at 6:45pm in the community room of NBHA’s headquarters at 7 Van Dyke Avenue.