It took eighteen days for the Middlesex County Prosecutor’s Office (MCPO) to file and announce the charges in a statement that was issued to some media outlets, but not New Brunswick Today.

While the MCPO statement said the incident happened “inside… the Golden Rail Tavern,” the establishment’s owner insisted it did not. 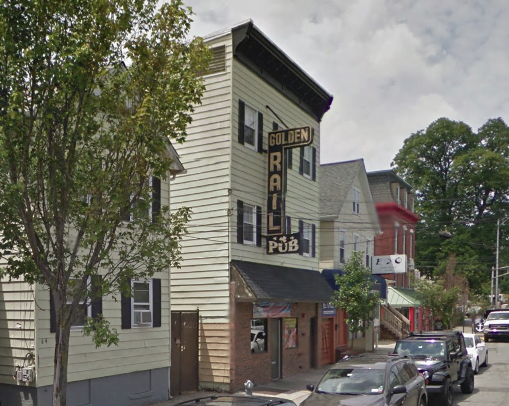 “Nothing happened inside the bar,” said Shaun Farrelly, who added that a news article was the first he heard of the incident.  “Nobody from Golden Rail door staff saw anything… This was all news to me and the manager who was working that night.”

Farrelly said that an ambulance showed up on Easton Avenue “a little after we had closed,” which would be shortly after Saturday night gave way to Sunday morning.

Regardless of the time and location, the charges are that Jones, a 23-year-old resident of New Brunswick’s Rutgers Village neighborhood, teamed up with four private citizens in the alleged assault and riot:

Middlesex County Prosecutor Andrew Carey said that his agency conducted the investigation “in conjunction” with the NBPD’s Internal Affairs Unit.

According to a spokesperson for Mayor James Cahill, Jones was suspended from duty on January 31 “as a result of an internal investigation regarding the incident in question,” but the city initially allowed him to continue collecting a city paycheck.

According to the NBPD’s Internal Affairs report for January, one officer was suspended for 90 days as a result of “violating Rules and Regulation- Off Duty Conduct and Departmental Policy and Procedure- Sick and Injured Reporting.” It’s not clear if Jones is the officer in question.

But then the MCPO filed the criminal charges on February 8, according to Cahill’s spokesperson, and the city stopped paying Jones. Cahill, who has served in the city’s highest office since 1991 and appointed the elder Jones to the Ethics Board, issued a statement that did not mention the officer by name: “The officer in question has been suspended from his duties without pay pending the outcome of the disciplinary action seeking his removal.”

“The alleged behavior, while off-duty, is held to this same standard and fails to conform to the conduct we expect from our officers and in no way represents the core values of the men and women who serve our community each day with the New Brunswick Police Department.”

A statement on the city’s website touting the hiring of Officer Jones and three other policemen said that the NBPD’s recent hiring push was “indicative of the department’s dedication to hiring to better expand its abilities to serve the community.”

The Golden Rail, which caters to a college crowd, previously found itself in the crosshairs of the NBPD as one of Jones’ fellow officers went “undercover” to purchase alcohol from the establishment in 2016.

Officer Nicholas Grammar, who stood next to Jones as the two men took their oath of office in January 2016, was just 20 years old when he bought a six-pack of beer from “the Rail” later that year.

“Officer Grammar was at the Golden Rail, in an undercover capacity, for an approved police investigation/operation,” confirmed Captain JT Miller, a spokesperson for the department.  “His role as an underage customer attempting to purchase alcohol was part of the investigation and justified.”

Shortly after the October 2016 City Council hearing on the establishment’s violation, we asked how many police officers were under the age of 21, and Miller declined to answer.

“I will not discuss how many other underage officers are employed by the police department as it could compromise ongoing or future investigations,” said Miller.

The MCPO characterized their investigation into the assault and riot as “active and continuing.”

Anyone with information is asked to call MCPO Detective Andreea Zebib at (732) 745-4274, or NBPD Sgt. Thierry Lemmerling who, for unexplained reasons, has handled virtually all of the department’s recent criminal investigations into city employees.