NEW BRUNSWICK, NJ—It was hard to keep track of all the shootings that occurred on Throop Avenue in 2017.

The sheer volume of violence, which claimed at least one man’s life, led the New Brunswick Police Department (NBPD) to coordinate with federal, state, and county law enforcement to track down the alleged perpetrators.

Ultimately, the city saw a 64% increase in assaults with guns in 2017, according to State Police statistics, and Throop Avenue continued to be the city’s worst hotspot for gun violence.

Shootings there led to at least two different wide-ranging investigations that saw eight men arrested and charged with a total of nearly 100 criminal counts. 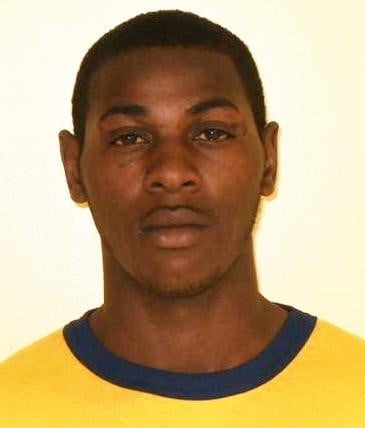 Tawan Moses, a 25-year-old East Orange resident, was shot and killed on the Throop Avenue side of Feaster Park at approximately at 8:30pm on November 17.

Moses was not the first person to be shot at in the area police that called “the hot zone” for its repetitious shootings, but he was the only victim to die from his injuries.

In the wake of the violence, city officials prepared plans to revamp the park, one of four located in the Second Ward of New Brunswick.

Two blocks south, at the corner where Throop meets Delavan Street, the situation was no better.

As we reported, a man was charged with three different attempted murders at the same corner during the summer of 2016.

In the months leading up to Moses’ murder, a string of shootings took place in the same area.  Those shootings, and a slew of other crimes including another murder in Camden, were blamed on a “major gang” by authorities.

On December 13, Middlesex County Prosecutor Andrew C. Carey and NBPD Director Anthony Caputo announced the arrest of seven members of the alleged gang, sharing the details of their “three month crime spree” with the public for the first time. 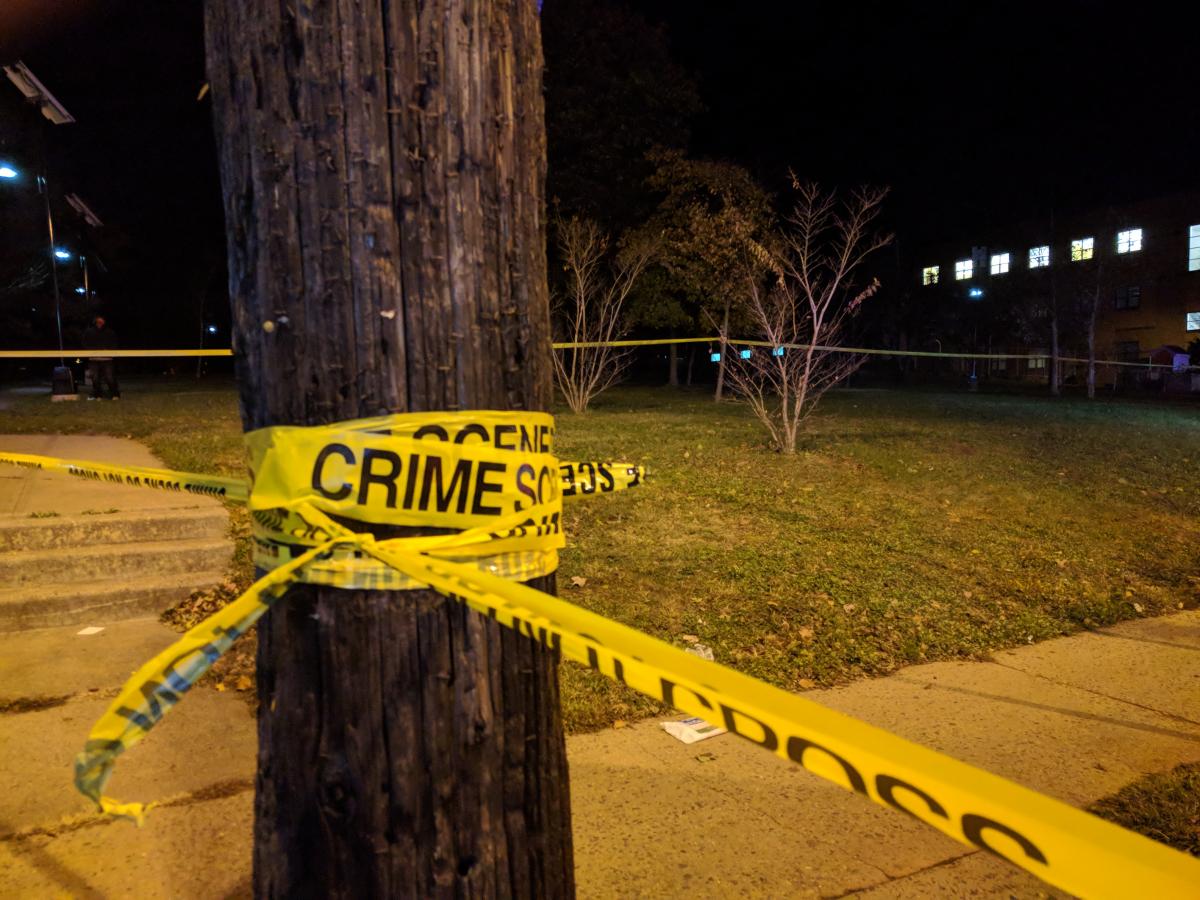 The news came three weeks after authorities identified 37-year-old city resident Kim Carter as the man allegedly behind Moses’ murder, and twelve days after the last of the alleged gang members were taken into custody.

“The three month crime spree began on September 7, 2017 and lasted until November 30, 2017 in New Brunswick,” read the official statement from the Middlesex County Prosecutor’s Office (MCPO).  “The arrests began on November 29, 2017 and continued through December 1, 2017.”

That investigation included the NBPD, the MCPO, the South Brunswick Police Department, the Camden County Police Department, State Parole officers, members of the federal Bureau of Alcohol, Tobacco, Firearms, and Explosives (ATF), and the prosecutor’s offices in Camden and Essex Counties.

“I thank and commend the many dedicated law enforcement officers and special agents whose efforts led to the arrests,” said Carey, who has been the county’s top cop since 2013.  “When addressing violent gang activity, results like these are only possible with multi-agency coordination, and the sharing of resources.”

“This investigation’s conclusion has resulted in a safer community.”

The gang-affiliated “crime spree” included “hot zone” shootings on September 7, September 19, and October 15, but also a slew of other crimes including a murder in Camden, a stabbing on George Street, an attempted carjacking in South Brunswick, and two gas station robberies, including one where a worker was shot.

Still, the comprehensive charges filed did not account for several prior incidents of gun violence in the Throop Avenue area, including a string of shootings in June and another shots fired incident on August 5. 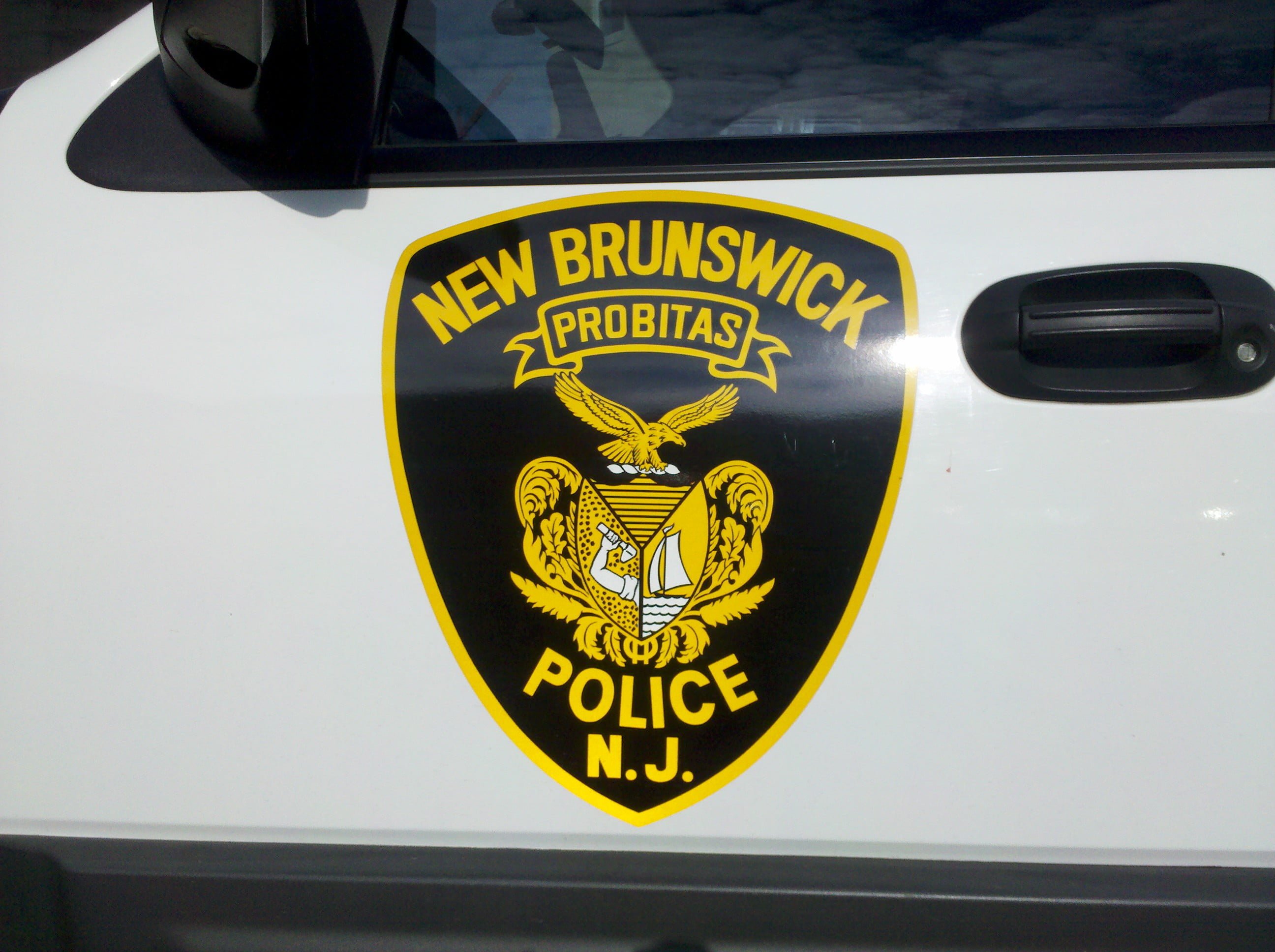 Like the majority of in New Brunswick’s gun violence cases that year, those incidents remain unsolved.

According to NJ State Police statistics, only 10 of the 36 assaults involving a gun last year were “cleared” by NBPD, meaning that 26 of the incidents remain unsolved.

According to authorities, the “crime wave” started with a shooting on September 7, 2017 at 10:20 p.m. on Throop Avenue.  That incident was not publicized and it’s not clear if anyone was injured.

Three days later, on September 10 at 4:34 a.m., a French Street gas station was robbed in another crime that went unpublicized.  Authorities believe the same two men responsible for the shooting, and two others, were behind the heist.

Less than a week later, the same two men involved in the September 7 shooting allegedly teamed up with another man in an “attempted carjacking” that may have involved an assault weapon.

That incident took place on September 16 at 2:40 a.m. somewhere on Beachwood Court, in the Monmouth Junction section of South Brunswick. 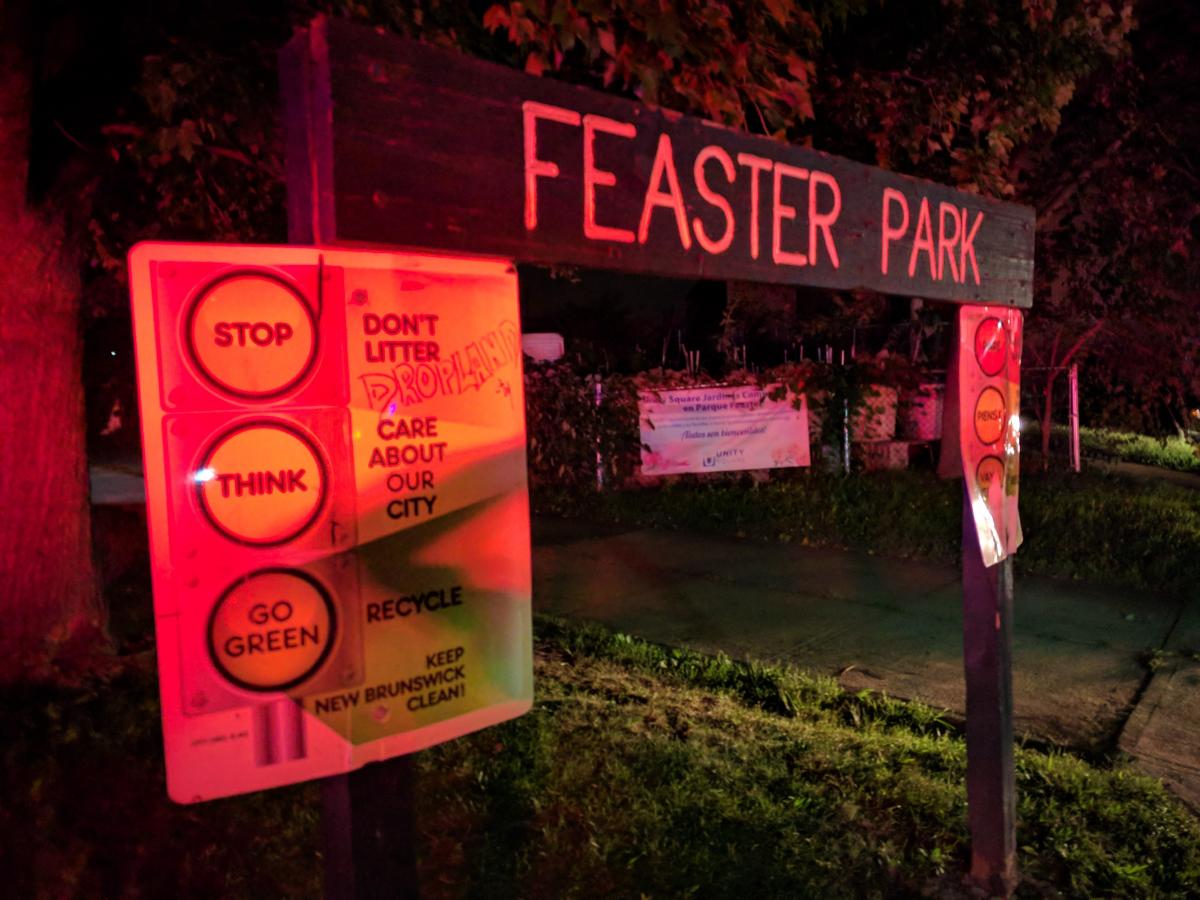 Three days later, on September 19 at approximately 9:21 p.m., it was back to the “hot zone” where some of the same men and another accomplice allegedly gunned down three others on the Throop Avenue side of Feaster Park.

Three men were injured but survived, including a 20-year-old Somerset man who was hospitalized in critical condition.

But the violence continued to plague the neighborhood.

As the prosecutor’s office put it in their official statement, “The mayhem continued on October 15, 2017 at 2:33 a.m. on Delavan Street in New Brunswick when approximately seven (7) shots were fired.” 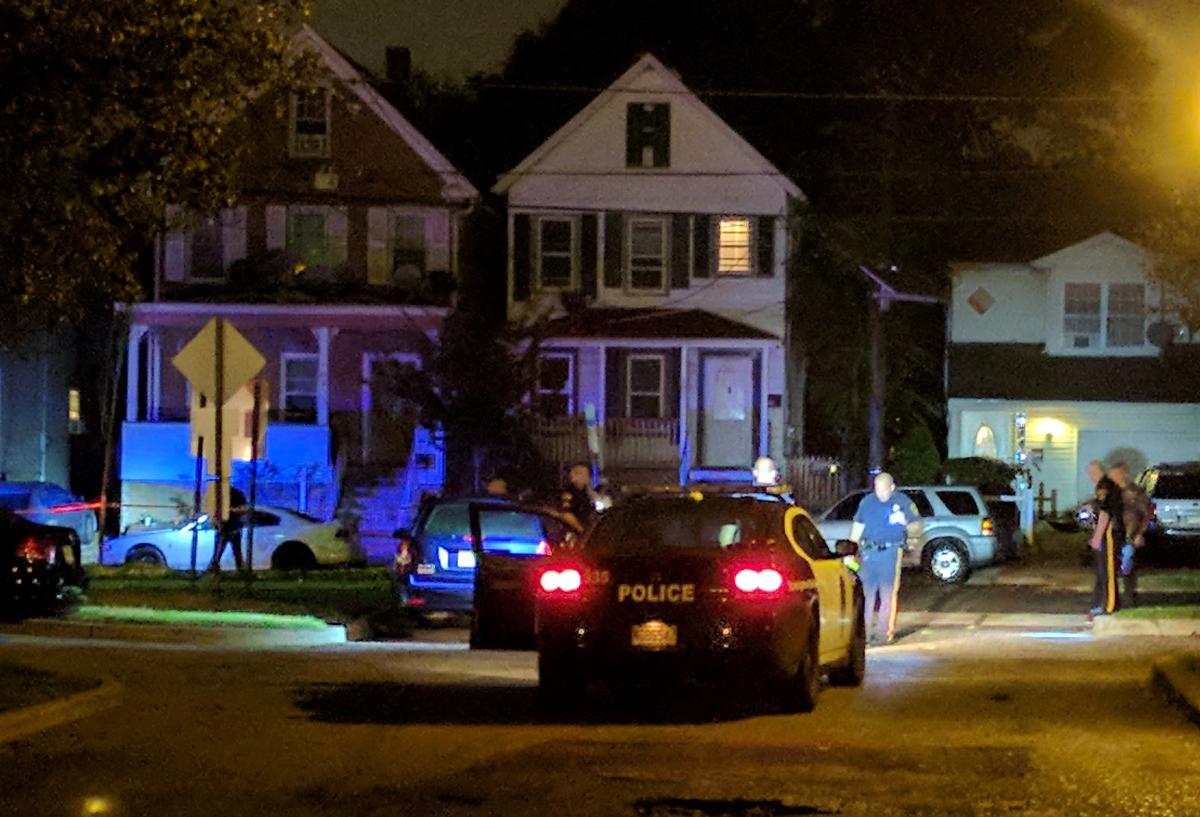 No one was struck by those bullets, but the surrounding neighborhood was left frightened and without answers.  It seemed the gun violence had once again creeped beyond the notorious park and into the nearby residential neighborhood.

Just two hours later, at 4:15 a.m., some of the same people involved in the shots fired incident at Throop and Delavan were allegedly robbing a gas station on Route 27 in South Brunswick.

According to authorities, the robbery “turned into attempted murder when a gas station attendant was shot.”

The alleged gang’s next target was victimized in New Brunswick on October 26 at 1:34 a.m., as a man was stabbed somewhere on George Street.

That proved to be the final violent crime attributed to the seven-member gang in the Hub City, but then Moses was murdered by Carter in the unrelated shooting on November 17.

It wasn’t until November 28, after another man in Camden was fatally shot that police began to close in on the group of allegedly violent criminals. 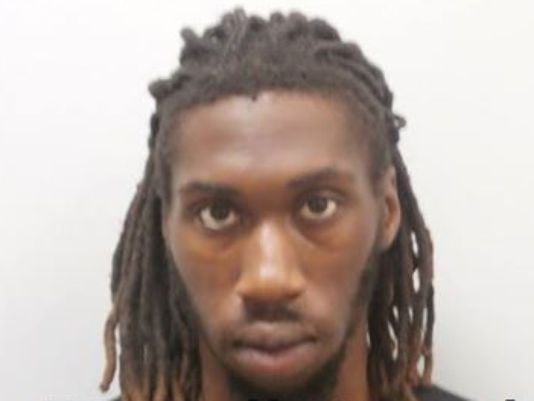 Police believed that Darnell Konteh, a 25-year-old resident of that city who went by the nickname “Badass,” was responsible for killing 28-year-old Lindenwold resident Stanford “Herk” Brown on the 1100 block of Atlantic Avenue.

The following night, Konteh and two other men who police believed were responsible for most of the other crimes in the spree were pulled over by NBPD officers somewhere in New Brunswick.

In the car with Konteh were 25-year-old Anthony Pinson, a Franklin Park resident who goes by the nickname “Smoke,” and Paul Sexton, a 21-year-old New Brunswick man nicknamed “Munch.”

Also in the car were multiple weapons, according to the police, and Sexton was allegedly in possession of an unspecified “controlled dangerous substance.” 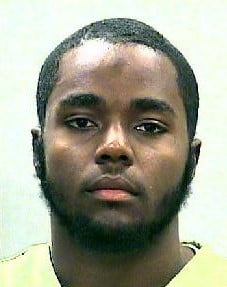 Pinson was charged with six counts of attempted murder, including three for the September 19 shootings in Feaster Park, and one each for the September 7 shooting at the same location, the October 15 shooting of the gas station attendant in South Brunswick, and the November 28 killing in Camden, where he was accused of shooting at another man during the same incident.

Pinson was also charged with three counts of conspiracy to commit murder, twenty-two different counts of weapons offenes, and one count each of the following crimes:

Meanwhile, Sexton was charged with three counts of conspiracy to commit murder, two counts of receiving stolen property, seven counts of various weapons offenses, and one count each of the following crimes:

Police subsequently snatched up the four other men they believed to be involved in the crime spree, including one man from New Brunswick.

Shaheed Wroten, a 22-year-old city resident nicknamed “Gleese,” was charged with attempted murder in the October 15 shooting of the gas station attendant, as well as nine counts of weapons offenses, and the following criminal charges:

Meanwhile, 30-year-old Antoine Williams of Newark, nicknamed “Wax” was picked up on three counts of attempted murder for his alleged involvement in the September 19 Feaster Park shooting, as well as conspiracy to commit murder, and four different weapons charges.

Editor’s Notes: Carlos Ramirez contributed to this report.  The author of this article has a pending complaint against County Prosecutor Carey before the Middlesex County Ethics Board.