And according to police radio transmisions obtained by New Brunswick Today, Rawls did not use his official emergency radio to contact authorities either.

Rawls serves as the city’s Emergency Management Coordinator and supervises the Fire Department.  He is the second-highest paid employee in the city government, earning a $155,053 annual salary.

The vehicle’s driver, identified as Robert Rawls, director of the New Brunswick Fire Department, was heading north on Livingston Avenue toward the Delavan Street crossing, when the children were struck.

Rawls, 56, was on-duty and driving a city-owned 2010 Chevrolet Tahoe. He immediately called authorities.

But the two phone calls to 911 released by NBC suggest Rawls did no such thing.

James O’Neill, a spokesman for the office and the author of the press release, did not respond to an emailed request for comment this morning.

Police radio transmissions reveal that authorities were on the scene and looking for the driver in the immediate aftermath of the incident. 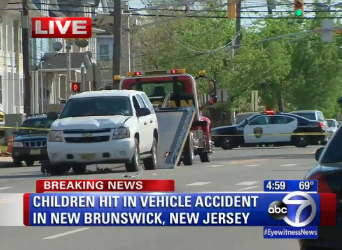 At 3:34pm, a dispatcher sends two NBPD cars to the intersection of Delavan and Livingston for a reported crash involving three kids.

“Got a suspect vehicle?” asks an officer reporting to the scene.

“I’m out here in the the middle.  It looks like three, four children got struck by a vehicle,” says another officer.

“No description yet,” he says, before requesting a second ambulance.

Just over a minute later, the same officer is heard saying that they have located the driver.

“We have the driver here.”

Rawls was apparently driving his city-owned Chevrolet Tahoe SUV when he struck the children.

According to previous reports on NBC New York, a family member of one of the victims alleged Rawls did not leave his SUV after the crash to help.

NBC had previously broken the story that Rawls has been in 19 crashes and had his license suspended 18 times.

After a Telemundo reporter caught up with Rawls at his first day back at work after the crash, Rawls walked away offerring no comment.

When asked how Rawls made contact with authorities, city and county officials could not provide an answer.

“I do not know,” said Captain JT Miller of the New Brunswick Police Department at the May 7 City Council meeting.

Miller also indicated he believed the county prosecutor’s office was notified of the crash “probably within ten to fifteen minutes.”

In actuality, the first mention of notifying that office on police radio transmissions came at least 20 minutes after the crash.

“Did you make the notification to the prosecutor’s office to head out here at Delavan and Livingston?” asks a police captain.

“Negative, we’ll do that now.” responds a dispatcher.

“OK, tell them we need a traffic unit, that’s all,” says the captain.

The Middlesex County Prosecutor’s Office eventually took over the investigation, due to Rawls position with the city.

Jennifer Bradshaw, a spokesperson for Mayor James Cahill, said on May 13, “I do not know where [Rawls] was coming from, or going, as the investigation is still ongoing. That information has not been released to me. The same goes for the manner in which the call to authorities was made.”

After the crash, Rawls was found to be at fault and New Brunswick Police issued him two traffic summonses.  The children were struck crossing the busy street in a crosswalk on their way home from school, but no crossing guard was present.

On May 19, after the Middlesex County Prosecutor’s Office had closed the case without filing charges, Bradshaw referred our question to them, but when we asked they said they couldn’t provide that information.

The prosecutor’s office took possession of the damaged SUV, and conducted a drug test on the Fire Director, according to a county press release.

“The decision to not file criminal charges was based on statements of witnesses, evidence at the scene and the results of toxicological testing, which showed no evidence of alcohol or drug use,” reads the release, adding there was “no evidence of excessive speed.”

The statement indicated that the Prosecutor’s Office will “contact the New Jersey Motor Vehicle Commission and request the agency re-evaluate Rawls’ ability and qualifications to hold a New Jersey driver’s license.”

Acting Middlesex County Prosecutor Andrew Carey has been serving in the position for just over a year, having been appointed by Gov. Chris Christie.

When New Brunswick Today asked the county prosecutor’s office what method Rawls used to call authorities per their claims, O’Neill responded with the following legal citation:

Rawls has not responded to multiple requests for comment since the incident.  A large group came to show support for him at a recent City Council meeting, just two weeks after hundreds of protestors angry about the crash came out.

But Rawls was not present at either meeting.  Acoring to the NBC report, City Hall said Rawls is currently banned from driving a city vehicle, or any other vehicle while on the clock.

As a result, Rawls has had to be chaeuffered around town by subordinates during the work day.  There has not been a major fire, or off-duty emergency since the incident.

Rawls also came under scrutiny last year when New Brunswick Today revealed the Emergency Management Council, which Rawls chairs, was not having its regularly scheduled meetings.

In fact, two members of the commission indicated they were unfamiliar with its existence.