NEW BRUNSWICK, NJ—In 2011 New Brunswick’s City Council supported a statewide ban on fracking, a type of gas drilling that has yet to be attempted in New Jersey, but one that has been proven to cause earthquakes and poison drinking water in other states.

Food & Water Watch organizers and city residents came out in force earlier this year to call on the council to take “the next logical step” and pass an ordinance banning fracking within the city limits.

But supporters of a ban of the dangerous drilling were surprised to see the council back off of their earlier anti-fracking position, instead passing a resolution that tried to play it both ways, recognizing “there are reputable and responsible spokespersons both for and against fracking.”

The toothless resolution also noted that, “The council lacks the technical expertise and resources to confront the questions implicit in the fracking controversy.”

“There is a great amount of public controversy surrounding the practice of fracking and claims by opponents of fracking that the practice is dangerous to the environment and to public health.  Contrasting those critics are other people in industry and the public who contend that fracking is safe and a very important measure to increase the flow of natural gas that will help to move the United States toward greater indepence.”

Supporters said it was “worse than doing nothing,” and quickly began plotting a drive to put the issue to voters this fall.

Residents and activists began circulating petitions at a community clean-up of Mile Run Brook on July 27, and have since knocked on doors across the Hub City building support for a ban on fracking and drilling for natural gas, gathering nearly 500 signatures that they plan to submit to the City Hall later today.

If enough of the signautres are deemed valid, the Council will have an opportunity to pass the ordinance and avoid taking it to the November ballot.  If they still won’t pass it, voters will be presented with a yes or no question this fall in the same election where they decide whether . 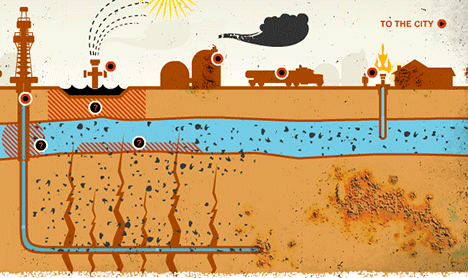 Hydraulic fracturing, also known as fracking, is a controversial method of obtaining natural gas from the earth, specifically from shale rock formations like the one New Brunswick is situated on top of.

According to a United States Geological Survey assessment of the South Newark Basin, it could contain as much as 1.6 trillion cubic feet of gas.

“New Brunswick is located on top of the South Newark Basin, an area already assessed by the US Geological survey as containing large amounts of natural gas,” said New Brunswick resident Lauren Petrie.  “The only thing standing between communities and the gas industry are local ordinances banning fracking.”

Fracking requires an enormous amount of water.  That water is then mixed with sand and various chemicals, including known carcinogens.  The volatile mix is then forced into the ground, cracking shale rock within the earth’s crust in order to release the natural gases and oil.

Surrounding sources of drinking water, including underground aquifers and water wells, have been poisoned by the methane gas, and the toxic chemicals in the mixture.  As gas drilling has accelerated, dozens of families have gained the ability to light their tap water on fire due to methane migration, as seen in this video.

Because the gas industry currently prefers to go after a different type of natural gas than the kind under the state, New Jersey has yet to see fracking wells erected in the state.  However, the local supporters of a national consumer advocacy group fear the practice could one day come to the Hub City.

Although domestic drilling for energy resources appeals to some, the local and global effects of fracking pose a dangerous threat to residents and the environment.

On a global level, large volumes of gases like methane are released into the atmosphere where they absorb solar radiation, accelerating the green house effect, and causing both global temperatures and sea levels to rise.

As drilling has increased over the years, especially within condensed areas, the atmosphere overheats causing life threatening environmental issues, such as cyclones and super storms like Hurricane Sandy.

On a local level, fracking has an even more adverse affect on the environment, since it directly endangers the lives of people and surrounding wild life.

Pennsylvania, which is located over a large shale rock bed called the Marcellus Formation, is one of several states that are drilling for natural gas.

The State of Pennsylvania has also allowed fracking companies to lease over 200,000 acres of land near the Delaware, putting more than 15 million people spanning from New York to Delaware, in danger.

This basin supplies water to the Delaware River Canal, which is where New Brunswick, along with many other areas in the state, receives their drinking water.

A moratorium on fracking in New Jersey expired in January. 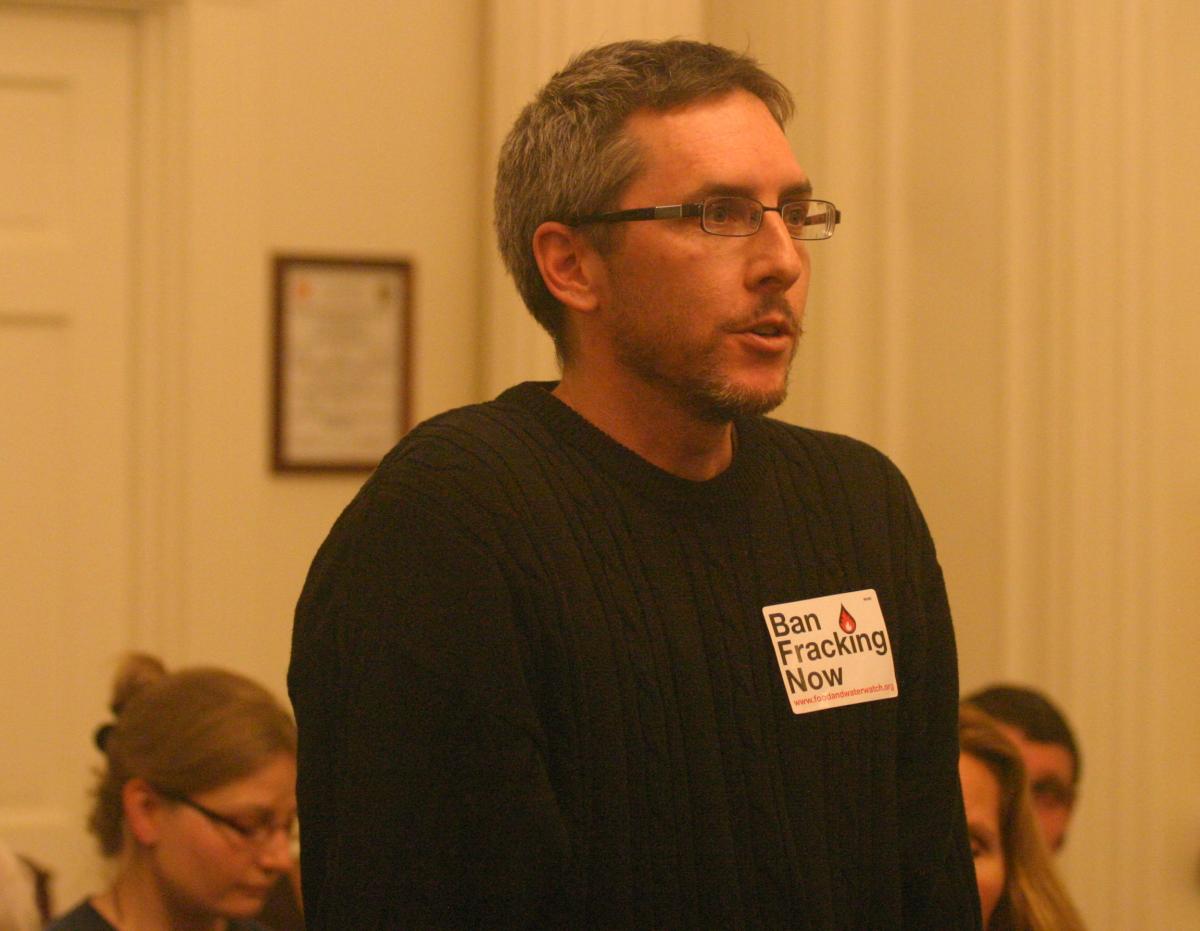 The City Council had experienced an increasing contingent of citizens calling for a permanent ban on a dangerous type of gas drilling that has poisoned aquifers in Wyoming and water wells in Pennsylvania.

While city residents, members of CWA Local 1082, and supporters Food & Water Watch – a nonprofit organization focusing on legislative and corporate responsibility in regards to food and water – have repeatedly raised concerns about the drilling and pushed for a pre-emptive ban on fracking, City Council members have hedged after putting the topic on their April 17 meeting agenda.

Activists led by Food & Water Watch’s New Jersey Director Jim Walsh have, in increasing numbers, attended council meetings and spoke up in support of a city ordinance banning fracking, and a resolution calling on the state government to ban the disposal of fracking chemicals in New Jersey.

In 2011, the Council voted unanimously to call on the state government to ban fracking across the state.  The legislature passed the ban, but it was conditionally vetoed by Gov. Chris Christie.  Instead, a one-year moratorium was adopted and has since expired.

The remainder of the resolution goes advises the Christie adminsistration to “reenact a moratorium on fracking activities in the State pending a comprehensive review, analysis and determination on the impact of fracking on the environment and public health of the State and whether regulation or prohibition of fracking is ncessary to protect the public interest.”

“I think you could support the re-enactment of a moratorium for a reasonable period… I suggest that maybe three years. they ought to get out of their way during that period of time.

The council, however, seem to be split on the issue of how forcefully to oppose the practice.

Councilwoman Elizabeth Garlatti said she was the one who initially raised the issue to her fellow council members, but she indicated that a key study on fracking by Environmental Protection Agency would not be published until 2014.

Councilman Glenn Fleming, who wasn’t yet on the council in 2011, rambled off excuses not to pass a ban, “We bounced this back and forth before.  I think our concern was hearing all sides of the issues, making sure that we had an informed decision, that wasn’t just based on various talking points, various issues from one side or another.”

Fleming continued to state that “Frankly, I have my own opinion on it and I have heard persuasive arguments on both sides of the issue. You know one side we’re talking about water quality, we’re talking about pollution and stuff like that, but then on the other side we talk about looking for a different alternative energy sources.”

“I’m ready to vote for the ban if we can get you to stop talking,” Egan told Walsh.

Garlatti expressed interest in supporting stating a ban, stating that her “concern with fracking is how it relates to water quality. New Brunswick has an excellent reputation for supplying water throughout its boundaries and also to other municipalities.”

Anderson didn’t take a side at first, but eventually garnered applause from the crowd when he said he would look into “whether or not” to take action.

Anderson, along with Council President Rebecca Escobar, agreed with his colleague in terms of wanting to receive more information on the issue, while keeping the city’s interest in mind.

After several months of spirited discussion, the council came prepared with the resolution to their June 5 meeting, but comically could not locate a copy when it came time to pass it.

Twenty-nine towns and cities have already passed resolutions calling for a ban hydraulic fracturing within the State of New Jersey.  New Brunswick would be the first to actually ban the practice within its borders if it adopts an ordinance.

Editor’s Note: Food & Water Watch is a proud sponsor of New Brunswick Today and our editor is a former staff member of that organization.