NEW BRUNSWICK, NJ—After 25 years in downtown New Brunswick, Amber Lion Antiques will be closing at the end of September.

In April of 1978, Rob Marchisotto opened Amber Lion Antiques at 356 George Street, running it as a sole proprietorship with his family for over two decades, even hiring his mother, a former elementary school teacher and administrator, to work “part-time.”

A Rutgers alumnus like his mother, Mr. Marchisotto knew that downtown New Brunswick would provide him with a sustainable customer base, and went so far as to purchase the building in which Amber Lion Antiques is housed.

When asked about his experience running a business in New Brunswick and why he was closing, Mr. Marchissotto replied, “I am grateful for the opportunity this town has provided us. As the county seat, [New Brunswick’s] traffic flow is unrivaled, with the courthouse, Rutgers, Johnson & Johnson, hotels, the train station, and other notable places nearby. It is a unique town.” 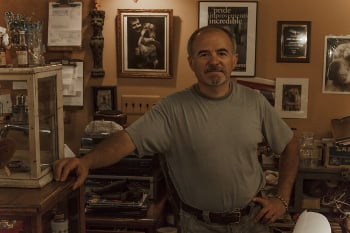 “After 25 years,” Mr. Marchisotto continued, “I had a good opportunity to sell the building. I feel I’ve run my course in New Brunswick.”

Mr. Marchisotto has sold the building to a private individual, not a corporate entity.

Unsurprisingly, Mr. Marchisotto’s only complaint about New Brunswick was about its “lack of parking.”

Rob Marchisotto also holds a degree in Economics with a minor in English from Rutgers University. “I would have preferred a business degree, but back then they didn’t have one,” Mr. Marchisotto explained. 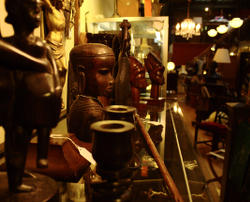 Amber Lion Antiques has been through two different New Brunswick mayors, eleven New Jersey governors, and five United States presidents. In its two-and-a-half decade lifespan, the store has also employed three different dogs: Roxy, an English Bulldog; Griffy, a corgi; and Zuki, a Shar-Pei and the original “Amber Lion” for whom the store was named.

Zuki can be seen in pictures behind the store’s counter, pictured above.

Marchisotto will continue to sell antiques out of a restored 19th-century barn (a new “version” of the Amber Lion) in Lambertville, New Jersey.  Until then, everything at the George Street location is being sold at a 10-30% discount.