NEW BRUNSWICK, NJ—On Friday, February 23 at least 200 protestors showed solidarity for the broader labor movement in the United States, marching from College Avenue to Albany Street, and then to Rutgers President Robert Barchi’s office to support the push for a $15 per hour minimum wage for all Rutgers campus workers.

The action was initiated by the Rutgers chapter of United Students Against Sweatshops (USAS) and the Rutgers-American Association of university Professors – American Federation of Teachers (AAUP-AFT), along with numerous co-sponsors. 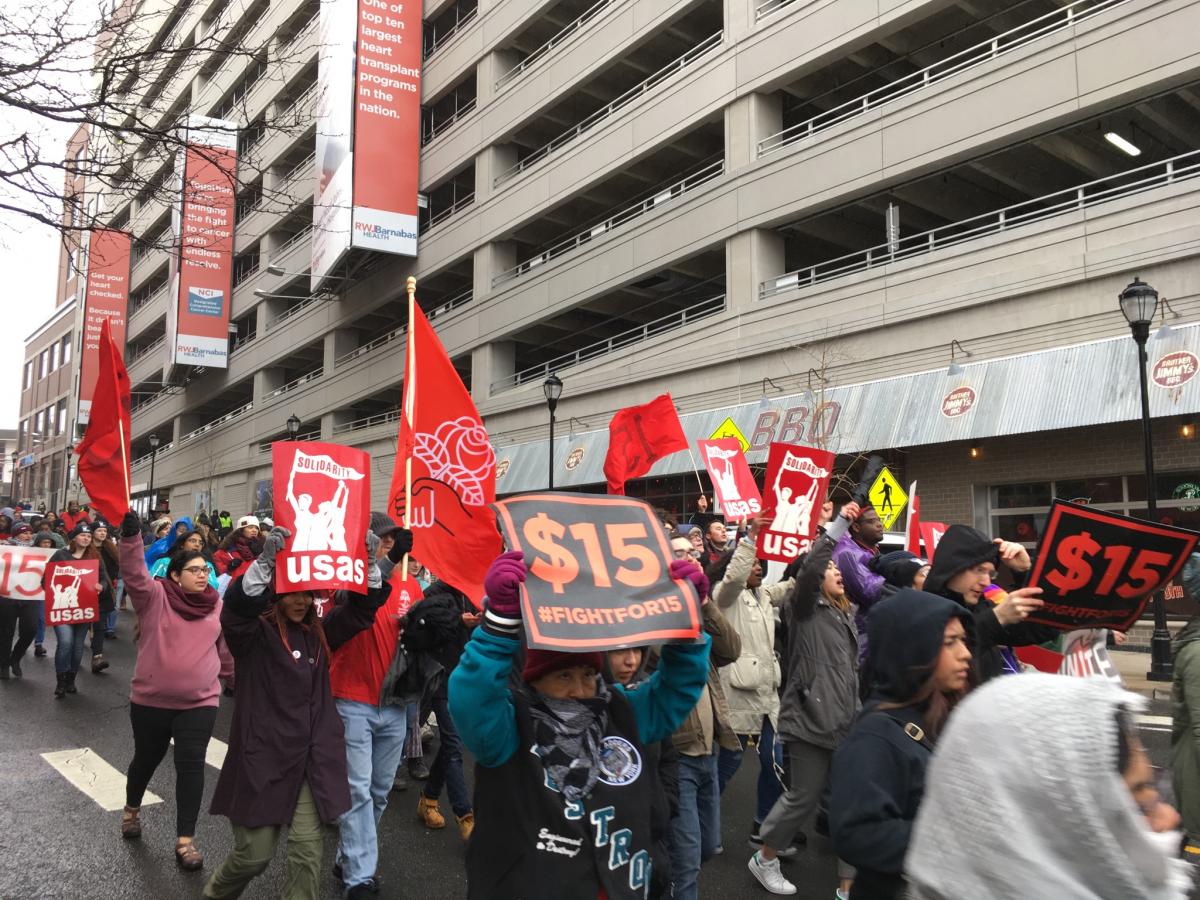 Protestors could be heard singing, chanting, and carrying signs to demand Rutgers give its workers a $15 an hour wage. The march began outside Brower Commons, where various speakers addressed the crowd with megaphones, speaking about the university owing its workers a livable wage, more respect, and perhaps even free tuition in the future.

One such speaker was Rutgers USAS member Mack Miller, who was very encouraged by the protest’s attendance.

“[The turnout] was amazing. I thought it was so powerful. I was so taken aback by the amount of people that supported this campaign … that were so down to take to the streets and show the administration that people need a $15 minimum wage,” Miller told New Brunswick Today.

The action was just the latest part of a year and a half campaign for an increase in the school’s minimum wage, Miller said.  The campaign has already succeeded in getting the university to increase the minimum wage for all student workers to $11 per hour, as we reported. 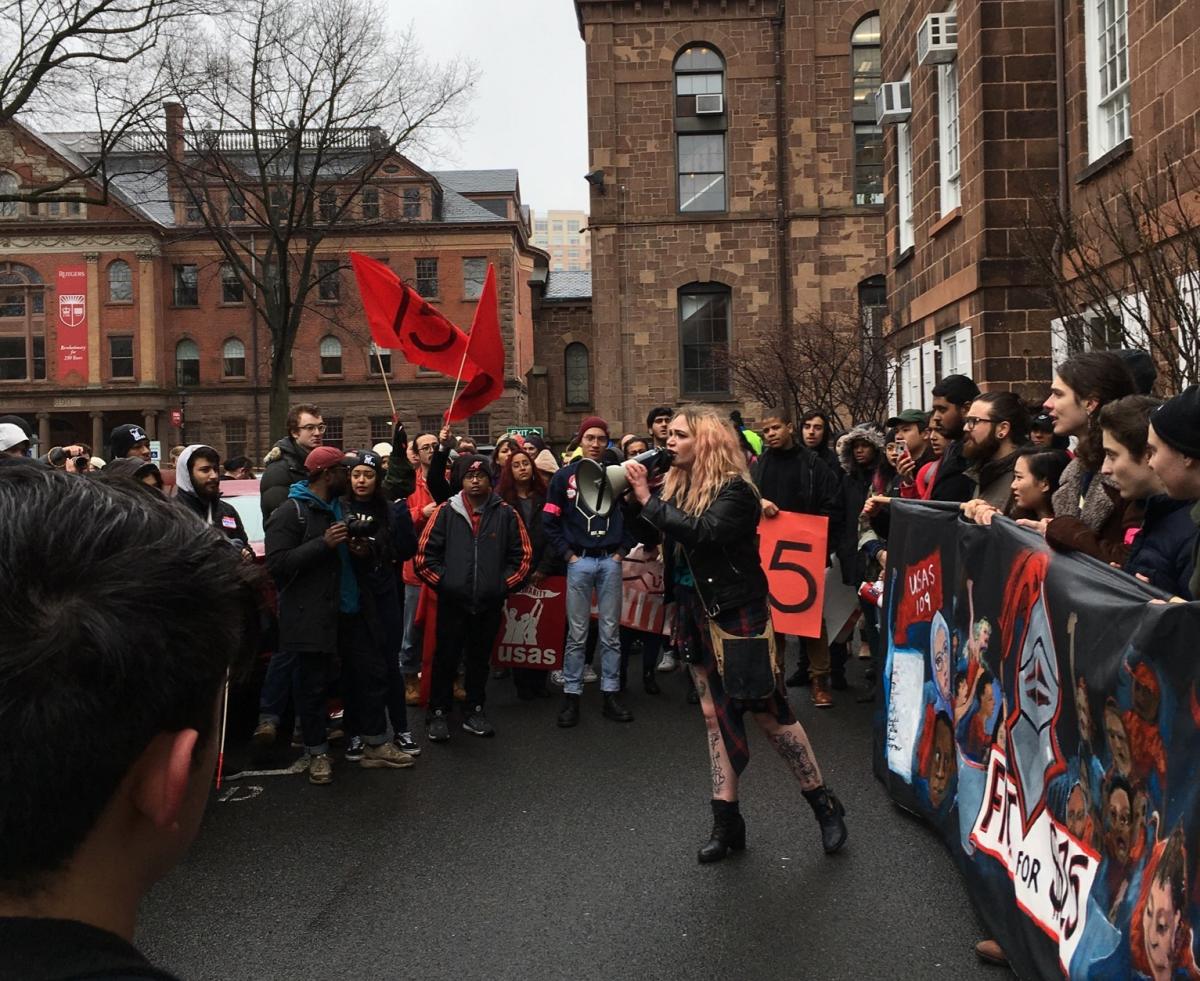 “We’ve had meetings with the administration, we’ve gone to the Board of Governors meeting, we’ve met with Barchi privately, we’ve passed resolutions through the student senate, we’ve petitioned, and you can see us out on the street, talking to people.”

Miller said the most recent action before the rally and march for $15 was at the December 12 Board of Trustees meeting where Rutgers USAS effectively shut down the entire meeting.

The February 23 rally was a part of the USAS 21st annual national conference, where chapters from all over the United States came to learn and stand in solidarity with their fellow members.

Taia McAfee, a USAS member from the University of Mississippi, said the conference was meant to teach newer USAS members how to be better activists and to make them feel welcome within the organization.

“People with different identities from marginalized communities can come together and talk about that identity and how that affects being a USAS member and organizing in general,” McAfee told NBToday.

McAfee explained that last year’s USAS conference was her first and that the experience made her want to come back. “I felt really affirmed, and while I thought that, being black and being a woman, I wouldn’t feel as comfortable as I do, USAS has done a great job at making the space comfortable for everyone.” 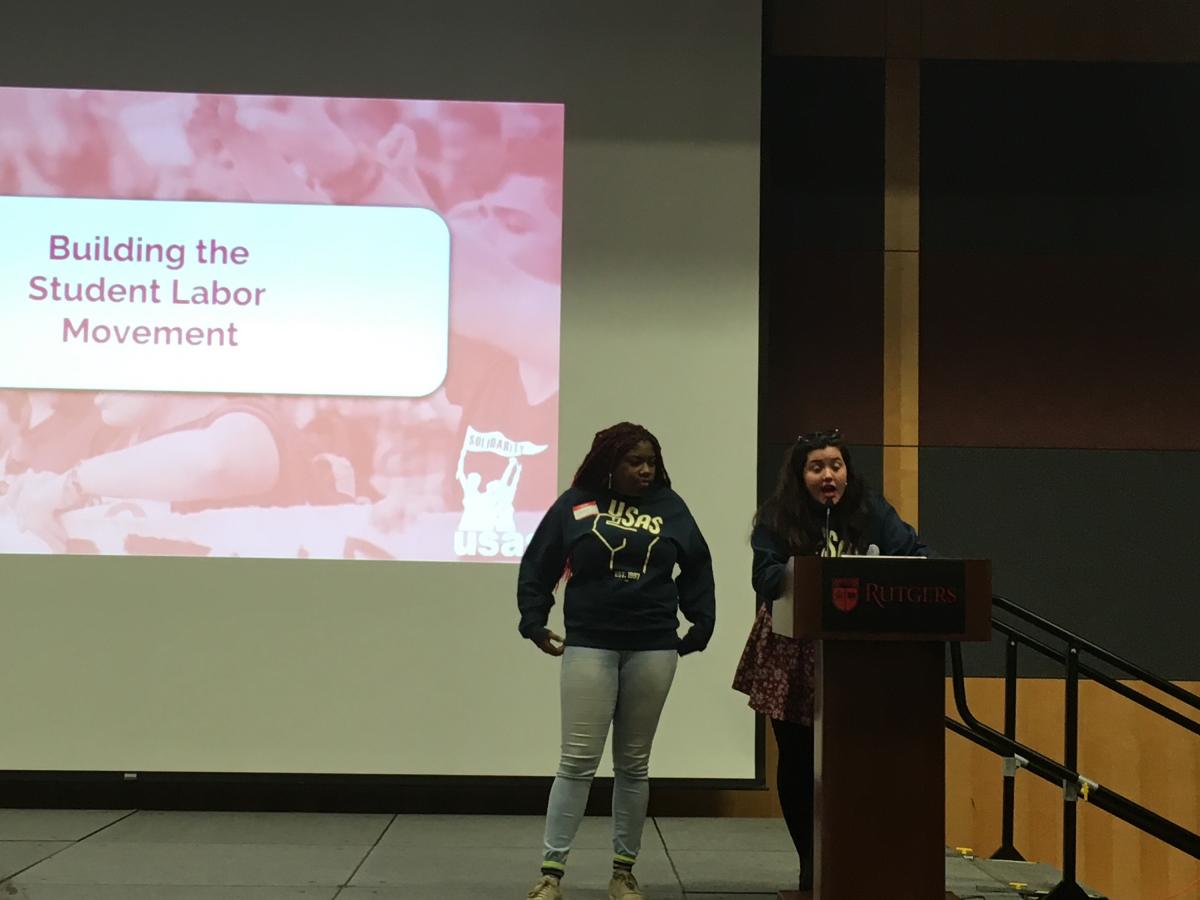 McAfee and Ana Jimenez give a presentation on the growing student labor movement to USAS members.

The conference included many other presentations, including one from international labor organizations such as Alta Gracia, which runs one of the world’s only unionized garment factories.

During a presentation on the United States labor movement, McAfee stressed the need to make the movement more attractive to women and minorities.

“The current labor movement is too pale, too male, and too stale.” After her presentation McAfee led the crowd in a “solidarity clap,” encouraging members to do more than passively observe.

USAS members were also invited to participate in various workshops, giving them a chance to increase their organizing skills. Workshops included lessons on engaging with university administration, strategies for organizing campus workers, more effective fundraising, and how to perform effective outreach.

Another aspect of the conference was the caucuses for the various identities within USAS, such as people of color, recovering addicts, and undocumented immigrants.

Miller, chairperson of the USAS Queer Caucus, said that the Queer Caucus gave members a chance to strategize on ways to combat homophobia within the organization and also in the broader labor movement.

Miller said that while USAS is focused on getting a $15 minimum wage now, the organization is also looking to the future of the campus labor movement.

“It’s always a stepping stone,” said Miller. “We want healthier, stronger, and more democratic unions, we want stronger union density at Rutgers, and we want better representation [within] the faculty, [including] people of color, working class people, and queer people.”

The USAS conference concluded on Saturday, February 24 with with the members watching a video of their march for $15. Members could be heard cheering as footage of organizers rallying the crowd outside President Barchi’s office played on a projector.