NEW BRUNSWICK, NJ–Matt Mischler has been a nightmare for the New Brunswick Zebras' soccer team.

Collectively, he has scored seven goals against them in three matches, including a hat-trick to knock them out of the semifinals of the state tournament last season.

Both teams are very talented, but they exhibit different styles of play.

The Zebras use more footwork, finesse and use of the flanks to create chance, while Monroe looks to focus on their defense in order counterattack by sending through balls up to their speedy forwards.

Center back Matt Cavadas played a key role in disrupting the Zebras' offense.

"It took absolute guts and just working hard for each other. I mean that New Brunswick team is incredible, you got players like Willie Rojas, both wingers incredible," said Cavadas.  "We really had to come together and double players to make sure they wouldn't beat us on the run."

In the 10th minute, New Brunswick was called for a "hand ball," giving Monroe a penalty kick. 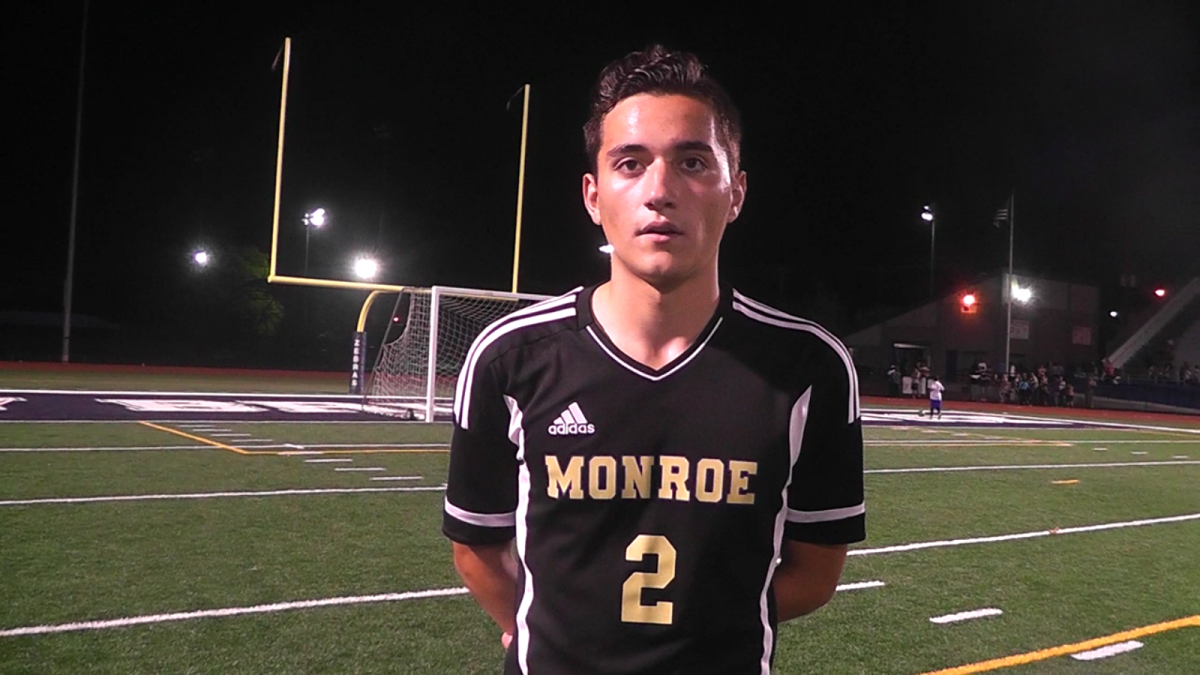 Stepping up would be Mischler. With no problem, he struck a grounder to the bottom left corner past Dalber Inostroza for the game's first goal.

In the 34th minute, Mischler used his speed to start a run from midfield before dishing it out to the right flank over to Pat Nolan.

With one touch, Nolan delivered an accurate cross to Matt Hoyt headed into the net, putting Monroe up 2-0.

But the Zebras responded with two goals in the span of a minute.

Two minutes later, Rojas would take a free kick from 30 yards out. After it headed off Luciano Garcia, Homer Melendez was there to chip it in, cutting Monroe's lead to 2-1.

A minute later, Kelvin Ortiz sent it a pass which caused chaos as it bounced off mutiple players. Coming to Rojas, he faked a shot, slid right to avoid a defender, then blasted a shot off the bottom of the cross bar, slamming down just past the goal line and tying the game 2-2.

Just like that, the score was tied at halftime as the Zebras unraveled the cushion Monroe had created.

In the 62nd minute, a difficult officiating decision changed the landscape of the game.

While close to being offside, Pat Nolan was able to get a head to the ball before Inostroza collided with him in an attempt to clear it away, a dangerous play leaving Nolan on the ground in pain. Back up goalkeeper Jomar Vizcaino would come on and a make an incredible save on Mischler's penalty kick to the right.

However, a Zebra player was caught entering the box too early, giving Mischler another opportunity.

On the second try, Mischler pounded it straight down the center in the upper part of the net, giving the Falcons a 3-2 in the 62nd minute.

Once the Falcons had the one-goal lead, they hunkered down on defense and made it nearly impossible for the Zebras to penetrate inside the box and get good looks on goal.

"Most of the game it was pretty scary but at the end of the day we were able to get things done and I made the saves where I needed to make the saves and that's it," said Rios. "As a goalie I've learned you've got to love the aggression and you can't worry about if you get hurt, you just got to do what has get done." "We still have a few things we need to fix in our midfield. Great win today, we're going to use that energy we got from today's game to ride through GMC's."

Despite losing the contest, New Brunswick's home crowd showed nothing but love and support for their team.

After each Monroe goal the fans chanted "Let's go Zebras" to keep their team's spirit alive, and of course showed their dismay on calls where they did not agree with the referees.

"I think this is a great confidence booster, I think the boys know that we played the best soccer that we have all season long and I think that this is definitely going to help to propel us and elevate our level of soccer going into this tournament and I'm sure we'll see them again," Zebras Coach Rafael Castillo said.

This is the second consecutive year the Zebras earned the #2 seed in the upcoming Greater Middlesex Conference tournament, while Monroe has made the jump from #3 last year to the top seed this year.

With this in mind, there is a good chance these teams will face each other again, perhaps fighting for the GMC championship.