NEW BRUNSWICK, NJ—Several violent crimes, including at least two allegedly committed by members of the Rutgers University football team were never publicized by the school, contrary to a pledge made by their Chancellor.

Richard Edwards, the school’s New Brunswick Chancellor, brushed off questions about an armed robbery and assault where a Rutgers student was victimized by seven attackers on September 7.

That night, the Rutgers University Police Department (RUPD) arrested seven non-students who allegedly assaulted and robbed a student leaving the College Avenue Gym at approximately 12:43am.

But the serious incident, which took place on or very near the university’s campus, did not generate one of the school’s infamous “crime alerts.”

Following a private Rutgers Board of Governors meeting held in part to discuss an unrelated crime spree allegedly perpetrated by members of the school’s football team, New Brunswick Today asked the man who promised to expand Rutgers’ crime alerts to include “serious incidents against students” why there was no alert.

“I don’t know what you’re talking about,” said Edwards, before dismissing the questions with a hand gesture and walking away from this reporter.

In March 2014, Edwards wrote a letter to the campus community indicating that a new policy would result in crime alerts being issued for “serious incidents against Rutgers students… when the university is made aware of such incidents,” even if federal law did not require them:

Under the new policy, all students, faculty, and staff on the New Brunswick Campus will be notified of serious crimes against persons that occur beyond the boundaries of the Clery Act anywhere in the fifth and sixth wards of the City of New Brunswick. These wards include those off-campus neighborhoods most heavily populated and frequented by our students. In addition, we will inform you of serious incidents against Rutgers students, faculty, and staff in other parts of the city and areas surrounding the campuses when the university is made aware of such incidents.

Not only did the university not issue a crime alert.  The RUPD also omitted the armed robbery and assault from its daily crime logs, which are published on their website. 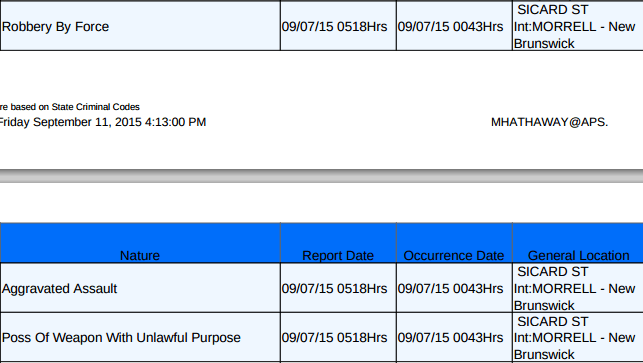 The incidents were later added into the logs, but only after New Brunswick Today exposed the cover-up in an article published on September 10.

Asked why the crimes were absent from the logs, Rutgers spokesperson EJ Miranda responded: “Investigation and processing of the seven individuals arrested at the scene was in progress. The log was since updated.”

In response, NBToday asked, “Is it typical for incidents like this to take 4-6 days to ‘process’ and ‘investigate’ before they appear first in daily crime logs?” one of several questions that the school’s Media Relations department has been unable to answer thus far.

Instead, Greg Trevor, the university’s top spin doctor answered for him, and avoided the question.

“Our commitment to public safety has not changed,” Trevor wrote, defending the decision not to publicize the armed robbery.

The latest incident is far from the first time that the university has fallen short of its commitment to inform the public about “serious” crimes.

For example, the school has said it will not issue crime alerts for “simple assaults,” only “aggravated assaults,” even if the victim is a student who requires hospitalization.

That new distinction came last fall, after New Brunswick Today asked why only one of two different assaults that occurred on the same city block during the same week were publicized via crime alert.

Then, after a rowdy Halloween night that resulted in chaos and confusion on the part of first responders, New Brunswick Today revealed a number of serious crimes that did not generate crime alerts. 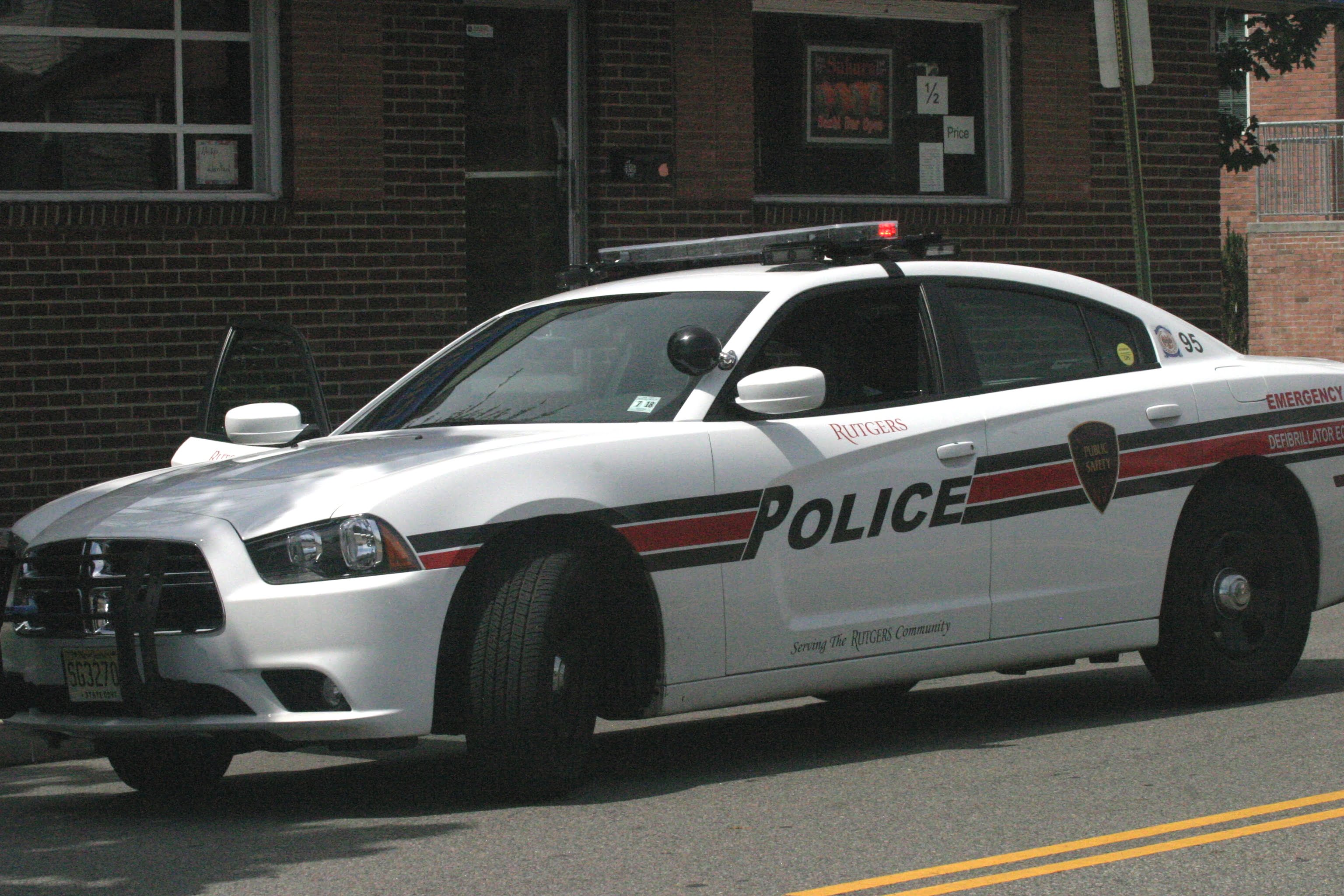 Unlike most police departments, RUPD apparently has no one on staff specifically assigned to handle media inquiries, and does not issue press releases.

Instead, the campus community has come to depend on the crime alerts and media outlets like New Brunswick Today for critical information on public safety.

More than one week after the assault and armed robbery of the student, a Rutgers spokesperson finally identified the alleged assailants on September 14.

The seven men charged in the incident include 19-year-old Kevin Holmes and 18-year-old Michael A. Divito-Piscoya, of Easton, Pennsylvania, and five men from Somerset County, New Jersey.

The five New Jerseyans were identified as 21-year-old Rocco Mills, 20-year-old Gennaro Toscano, 18-year-old Aidan M. Kollmar, 20-year-old David N. Velazquez, and 19-year-old Cody Sorrentino.  Velasquez hails from Warren Township, and the other four are from Green Brook, according to the school.

Stolen property was recovered at the scene, as well as two weapons: a knife and brass knuckles.

All seven were charged with aggravated assault and robbery.  Holmes, Toscano, Kollmar, and Mills were also charged with possession of a weapon for an unlawful purpose.

But RUPD’s Chief Kenneth Cop told New Brunswick Today that no crime alert was issued because the threat was quickly neutralized by the arrests.

“There was no ongoing threat,” said Cop.  “The arrest was made.  There’s no need to put out an alert, okay?”

“So, did the policy change from what Chancellor Edwards put out in March [2014]?” asked this reporter.

“I have a meeting to get to, alright?” Cop responded before walking into the closed meeting.

Even though Cop’s statement is in conflict with the policy handed down by Edwards, there are numerous other examples of crimes where there was an ongoing threat, but no alert issued. In some cases, the ongoing threat allegedly came from Rutgers student athletes who play on the school’s football team.

The arrests of six Rutgers football players, and at least two former players, sent shockwaves through the local community, just two days before the team began its 2015 season.

The young men were charged with a number of violent crimes in connection with an assault, two armed robberies, and an attempted armed robbery from April and May.

The assault, which resulted in a 19-year-old being hospitalized with a broken jaw, generated a crime alert disseminated two days later.  Several players were charged in the incident, but the charges and arrests did not occur for more than four months.

But that initial alert also included information about a second serious incident that occurred the following night, April 26.

In the second incident, two current football players, and one former player, allegedly donned masks and burst into the home of an alleged marijuana dealer, armed with a baseball bat and a firearm.

“The descriptions of the perpetrators for both incidents are limited at this time,” read the April 27 crime alert, which included a phone number for the New Brunswick PD’s Detective Bureau in case anyone had information that might help with the investigation.

The student athlete suspects allegedly stole marijuana and money from that home, but they also are accused of doing the same thing the following night at another home, just a few blocks away on Hartwell Street. However, the Hartwell Street incident did not generate a crime alert.  Nor did the trio’s alleged attempt to force their way into a dormitory bedroom in the Quads on Livingston campus in Piscataway on May 5.

Instead, the public was kept in the dark for months, until September 3, when most of the suspects were arrested by New Brunswick Police, working in conjunction with Egg Harbor Police, Rutgers Police, and the Middlesex County Prosecutor’s Office.

Rutgers officials claimed that the school’s police department was never notified about the two incidents that did not generate crime alerts, even though one occurred on campus, and in both cases the victims were current students.

Asked why those two incidents were not publicized, Rutgers spokesperson EJ Miranda responded: “Neither of the incidents you cite was reported to RUPD,” raising questions about other claims the school has made about unprecedented cooperation with the New Brunswick Police Department.

And, just when it seemed things couldn’t get any worse for the school and its embattled football team, they did.

Following a devastating loss on September 12, the team’s top player was charged with simple assault under the state’s domestic violence law, after an altercation outside of the team’s facility on the Busch campus in Piscataway.

Leonte Carroo, the star wide receiver for Rutgers, has been suspended indefinitely after becoming the seventh member of the team to be arrested in less than two weeks.

Even though the incident occurred on campus, no crime alert was issued. 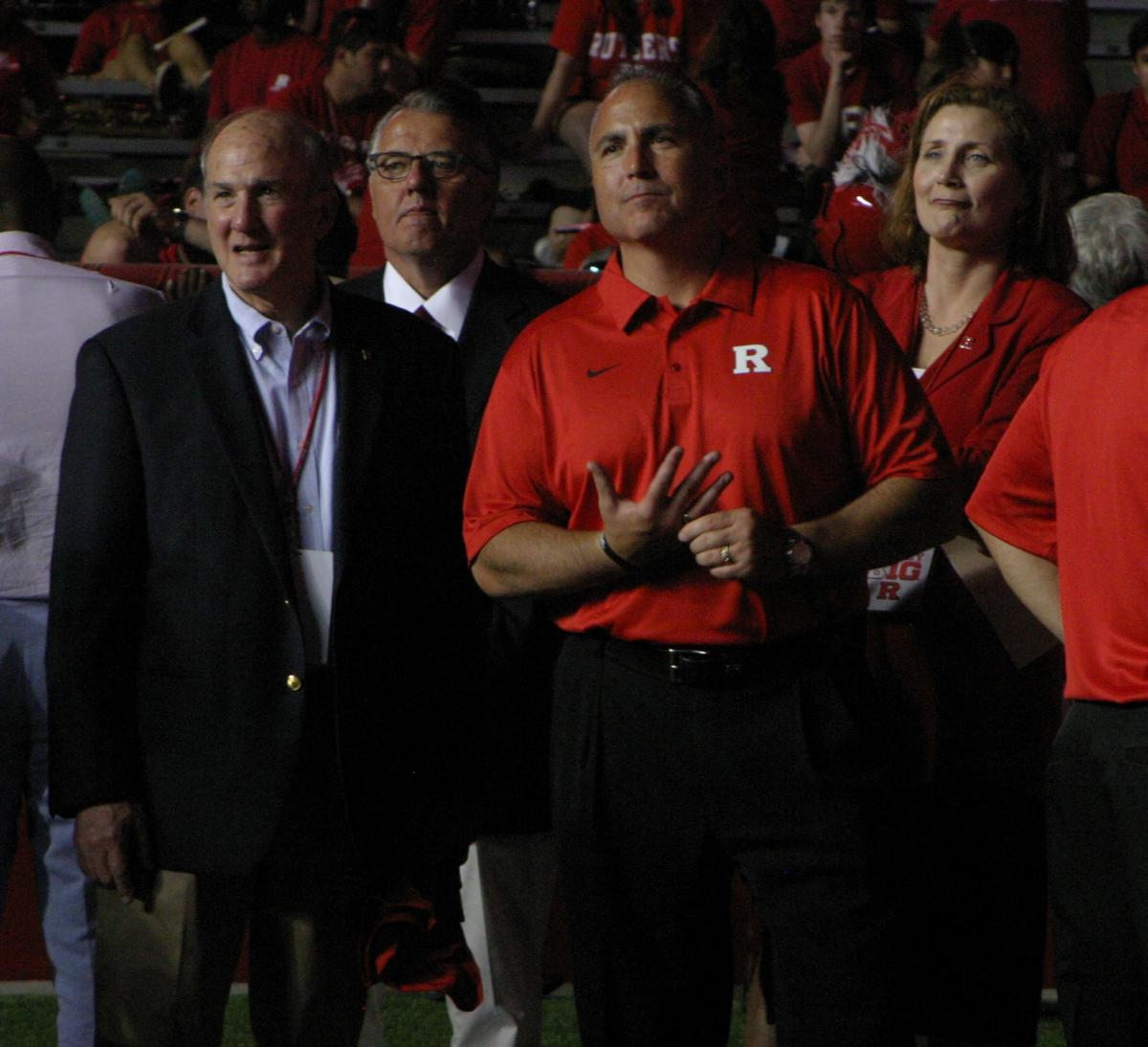 Rutgers President Robert Barchi addressed the initial arrests by saying that the alleged violent behavior of the football players was “not reflective of Rutgers or of the members of our academic community.”

As we reported, Patrick Melillo, the Director of Barchi’s office, was identified as the suspect in an assault case, after Melillio checked this reporter with his forearm and held him down against a chair while Barchi escaped from a public event in March.

Meanwhile students at the university expressed concern for their safety in light of the new revelations, and said they did not even trust the crime alerts that they do receive.

Students who came to speak with reporters outside the emergency Board of Governors meeting said they were concerned about the way officials characterized a “drive-by shooting” that injured an 18-year-old first-year student on August 30.

Rutgers University issued a crime alert that referred to the shooting as an “aggravated assault” and said the female victim was struck with “unknown projectiles,” even though police on the scene said the victim had suffered a gunshot wound, according to radio transmissions.

“To read that crime alert was like, ‘Are you joking right now? I just heard two gunshots from my window,'” said one student.

Governor Chris Christie, for his part, has not addressed the lack of crime alerts.  But he downplayed the significance of the charges against the Rutgers football players.

As he has frequently done when scandals befall the state university, Christie professed his support for Barchi and said he was not interested in “micromanaging” the school.

“You guys can micromanage Rutgers,” Christie told members of the media.  “I have a president there, I have a Board of Governors.  If they need my help or my advice, they’ll call, and if I see something that I think is completely outrageous, I’ll call them.”

Christie, who is out of state campaigning for US President, called the home invasions and assault accusations “not shocking” and “normal,” saying the school was “dealing with disciplinary problems with teenagers.”

“Having discplinary problems with teenagers is the normal course on a college campus,” said Christie.