NEW BRUNSWICK, NJ—On September 15, the State Theater held a free event in the middle of Livingston Avenue to promote their upcoming show “The Supernaturalists,” a magic show created, directed, and produced by well-known magician Criss Angel.

But the event appeared to come to a premature and anticlimactic end when performer Spencer Horsman was hospitalized after failing to escape from a “water torture cell,” a small cube filled completely with water and suspended by a crane.

Angel, a New York native, is the star who performs a very successful show in Las Vegas called “Believe,” as well as the A&E television show “Mindfreak.” 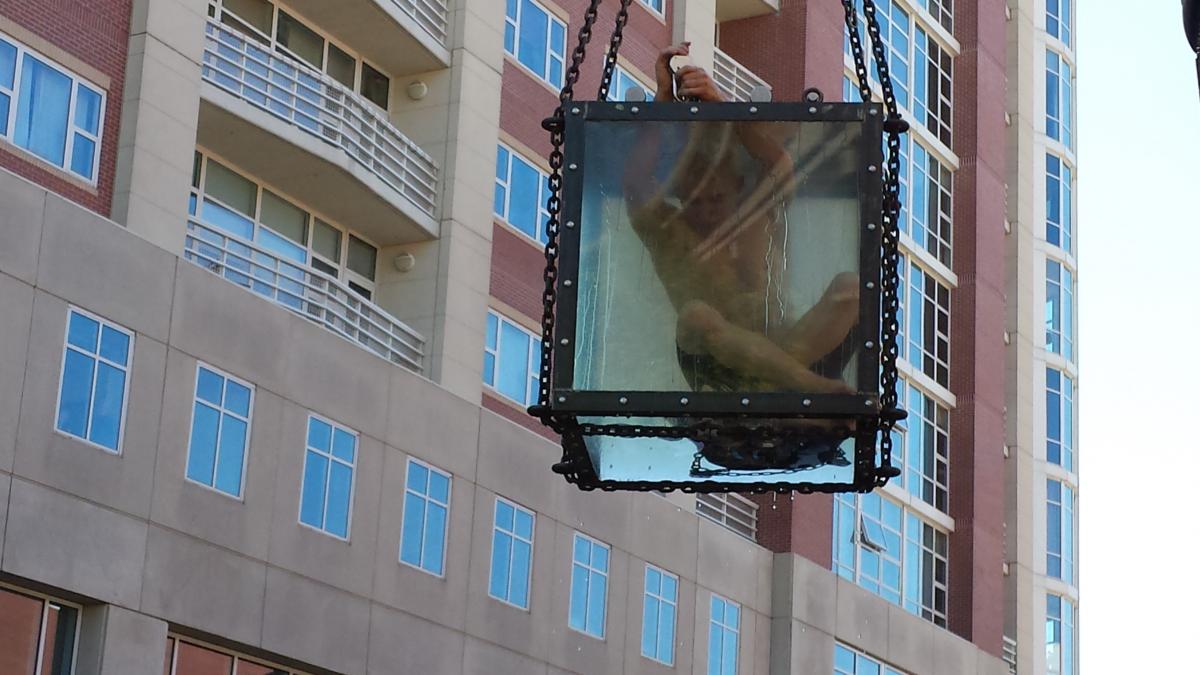 Angel explained how he had designed a stunt/trick called “The Water Torture Cell,” and that if Harry Houdini were alive today,  he probably would not have performed a trick so dangerous.

In front of a crowd of more than 200 onlookers, Horsman was brought out and introduced by another magician, Landon Swank, for his performance piece entitled “Submerged”.

Horsman had previously appeared on the NBC television program “America’s Got Talent.”

In June, he attempted the same trick at the Foxwoods Casiono in Connecticut, but it failed and almost cost him his life.

In that incident, he was actually saved by Angel.

“Submerged” involves locking Horsman in a set of chains with multiple pad locks and seating him down in the glass box, which was filled with water.

A cage-screen door, consisting of a metallic grid, reinforced by metal rods, was lowered on top of Horsman.

The rods were inserted into cylindrical hooks, and locks were put into the rods, so that  Horsman had to pick them to get out of the box.

After more than minutes trapped in the box, and four out of six padlocks picked, Horsman dropped one of the two picks that he had, resulting in the trick being aborted.

This being done, a crane hoisted the box up a story or two in the air, and then spent the next couple of minutes picking away at the locks.

He managed to get his arms unbounded enough to reach through the grid on top, and had picked the first of the topside locks when time ran out.

The crane operators lowered the box at this point to the ground, aand crews pushed aside the final pole trapping Horsman in the cell, hurriedly removing him and laying him on the ground.

Horseman was down for a few minutes, and then placed on a stretcher and wheeled into an ambulance. He was conscious at the time, and waved at the cheering and relieved crowd.

The ambulance remained in front of the Rutgers Mason Gross School of the Arts for almost ten minutes, before leaving for Robert Wood Johnson University Hospital (RWJUH).

New Brunswick Today reached out to RWJUH for a comment on Horsman’s status.

They responded that they currently have no one checked in under the name of Spencer Horsman and would not comment further on whether Horsman visited the hospital earlier in the day.

The Supernaturalists, described as “unprecedented and historic” by Angel, consists of nine different performers from around the world.

The show will go on, with four shows scheduled for the weekend of September 18, 19, and 20.  Tickets for the event can be purchased on the State Theater’s website.