NEW BRUNSWICK, NJ—According to a posting on a legal advice website, the Rutgers student worker who posted videos of himself driving at speeds faster than 140mph on a highway has been suspended.

Rutgers had originally refused to confirm whether or not Christopher Murray worked for the school, and still won’t say whether he has been fired, suspended with pay, suspended without pay, or remains on the job.

According to public records obtained through the Open Public Records Act, Murray makes $25,056 and has been on the payroll since October 21.  He was still an active employee as of May 26, three days before NBToday first brought the video to the attention of Rutgers Media Relations.

But now, Murray may be suspended for two weeks pending the outcome of a police investigation, if the information posted on the legal advice website is accurate. 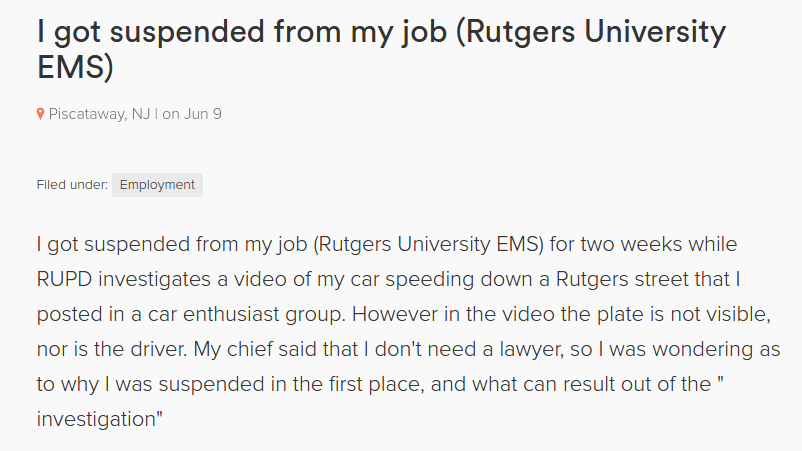 “I got suspended from my job (Rutgers University EMS) for two weeks while RUPD investigates a video of my car speeding down a Rutgers street that I posted in a car enthusiast group,” reads the anonymous June 9 posting on AVVO.

That video sparked a Rutgers Police Department internal affairs investigation, due to Murray’s claim that a “PD buddy” of his had helped to block off an entrance to the roadway where he was speeding.  The location of the roadway is not clear.

After being challenged by fellow members of the car enthusiast group over his actions, Murray defended his driving in part by suggesting that police had helped shut down access to the road where he was speeding.

Another video showed him burning rubber on Campus Road on the Rutgers Busch Campus in Piscataway.

A June 16 New Brunswick Today article sparked further investigations and media coverage, including a segment that aired on my9’s “Chasing The News” on June 18.

But, despite the difficult spot Murray may find himself in, the poster on AVVO appears not to be very concerned.

“My chief said that I don’t need a lawyer, so I was wondering as to why I was suspended in the first place, and what can result out of the ‘investigation.'”

The poster points out that it’s not clear whose vehicle it is in the video, which has been viewed over 3,000 times on YouTube.

“However in the video the plate is not visible, nor is the driver,” argues the poster.

One attorney, William Popovich of Trenton, responded with concern about the poster’s public admission.

“You just said in public in a non-confidential forum that it is indeed your car. So whether the plate is visible no longer matters,” wrote Popovich.  “You were suspended because you posted a picture of yourself speeding. They believe that, and you now have given them more evidence.”

“Speak with an employment lawyer today and don’t speak with us about this any more. Certainly don’t make more admissions online in public.”