NEW BRUNSWICK, NJ–On April 1, the United States Tennis Association (USTA) announced Rutgers University as one of the top 64 coed intramural and sport club tennis teams that have qualified to represent colleges and universities across the country in the 2015 USTA Tennis On Campus National Championship.

The tournament follows the World TeamTennis format and will be played at the Cary Tennis Park in Cary, North Carolina on April 9-11.

This is a major accomplishment for the Rutgers Club Tennis team as there were limited national bids in the section it competes in.

Rutgers Tennis Club is a co-ed tennis club that allows students with high school and club experience to continue playing tennis at a competitive level.

The club is comprised of the traveling team that competes with other universities at tournaments throughout the country and the recreational team that is less competitive and focuses more on personal improvement and fun.

Don Kim the team captain outlined some of the difficulties the team went through this year, but was full of excitement about the upcoming event.

“We’re proud to make it back to Nationals. It has been a much more difficult road becausewe lost one of our best players due to graduation, and initially our section was offered only two bids.”

The USTA added another national bid to the section making Rutgers eligible for the prestigous tournament which created another difficulty the team needed to raise funds for tournament cost and travel.

Being a club team RU tennis does not have the same financial backing from the University varsity sports are accustomed to.

The Rutgers Tennis Club members were able to cover these expenses through fundraising, Kim explained “We were able to raise over $6,000 for expenses All in all, the difficulties make us a stronger team and even more proud of what we have been able to accomplish.” 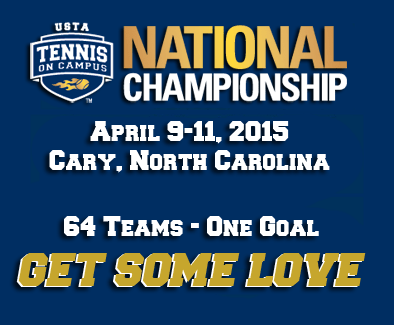 Rutgers is in great company considering the field they are competing with this year.

Since its inception in 2000, Tennis On Campus has grown significantly and today is played on more than 600 college campuses across the country.

“We are excited to announce the field for the 2015 Tennis On Campus National Championship – the most exciting recreational college tennis event in the country,” said Glenn Arrington, National Manager, USTA Tennis On Campus.

“Tennis On Campus provides college students with a host of opportunities for team camaraderie, social networking, unrivaled competition through tennis and helps them maintain healthy and active lifestyles through their college years.”

Results from the competition will be available at TennisOnCampus.com. “I want people to know that we exist and we are more than willing to add new members, especially advanced and competitive players for the travel team,” said Don Kim.  The club is also accepting donations and seeking more sponsorship.

The club can be reached by email at [email protected] or on their Facebook group.