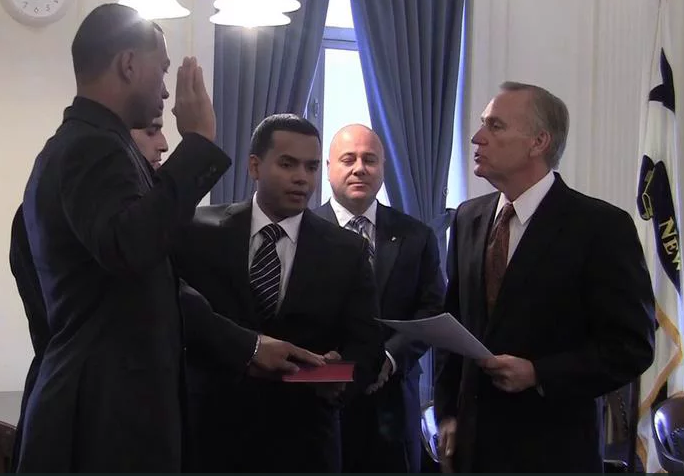 Above them are three captains and the department's Civilian Director, Anthony Caputo.

All five were administered the oath of office by Mayor Jim Cahill at the ceremony, which was attended by family members and co-workers.  New Brunswick Today was not permitted to attend the ceremony at the request of "some of the officers."

Promotion ceremonies in 2011 and 2012 were not only open to the public, they were also video recorded and published by the Mayor's Office.

"The decision is that of the police director, and has been for a while," Bradshaw said.

"I wasn't permitted into police promotion ceremonies either when I was with Patch, for what it's worth."

Members of Maurice Finney's family were among the first to arrive.  Finney, is a 19-year veteran of the NBPD, where he serves as a field training officer.

"He received a Unit Citation in 1998 for the apprehension of a dangerous suspect who was committing crimes around Middlesex County," according to a city press release.

But, according to his lawsuit against the city, "for at least 20 years, political control of the City of New Brunswick has been exercised by a political machine which is now headed by the Mayor."

For Acevedo, it's not the first time he will be called "seargent."

"He deployed to Iraq from January 2011 to November 2011, where he served in the rank of 1st Sergeant and was awarded the Bronze Star in recognition of his service," reads the release.

"A New Brunswick resident for many years… he has received several commendations and recognitions for his work, including his role in an investigation of a high-profile murder earlier this year on Hartwell Street," reads the release.

"Lietenants help to form the backbone of the department's chain of command," said Mayor Cahill at a previous promotion ceremony.  "Lieutenants provide leadership, experience and instill good judgment and character in the officers that they lead."

Bistany, whose brother works for the Middlesex County Sheriff's Office, has risen through the ranks quickly.  He has only been with the NBPD since 2001, when he started as a dispatcher before becoming an officer.

The department has a total of 126 sworn officers as of November 10, fewer than in previous years.  But Mayor James Cahill has promised to hire twenty officers in this year's budget.

"The department has two new officers out on the road and eight more going through the current academy, for a total of 10," said Bradshaw.