All one needs to participate is a pen and a device that uses the global positioning system (GPS).

Geocaching is a sport, which began in May 2000, when GPS systems became accurate enough to locate a container—or at least to bring an individual within several feet of it.

The containers, known as caches, can be large or small, often the size of a pill bottle, and are hidden practically in plain sight. They could have been placed there by your neighbor, your significant other, or even a visitor from out of town. 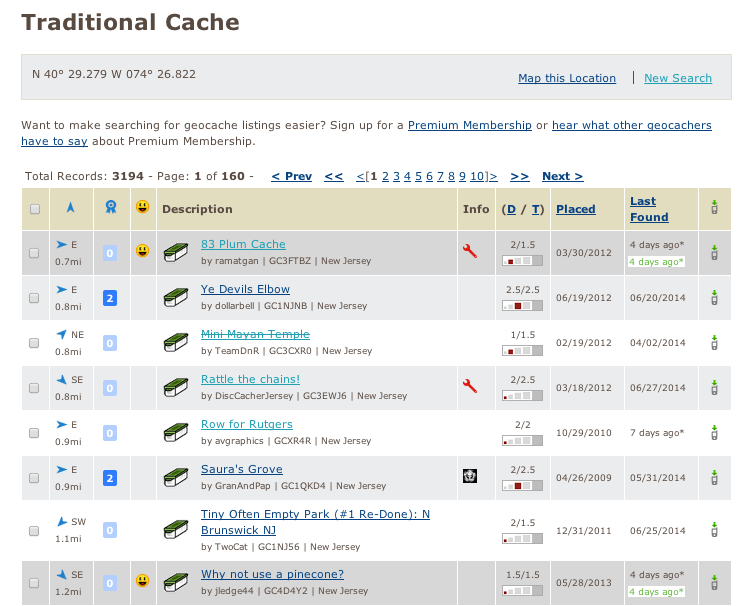 According to the official geocaching website, there are a handful of caches are hidden within the City of New Brunswick, and more than 3,000 within 25 miles of the city center.

Each cache contains, at a minimum, a log of all the geocachers who have found it in the past.

Some caches, if they’re large enough, include gifts from somebody who found the cache before, or a pen or pencil to sign the log sheet.

It is widely understood that every geocacher should bring a pen of their own just in case one is not included.

It is also common courtesy to avoid causing any public disruptions, to take precautions for possible dangers in the area (poison ivy), and to leave behind, for future geocachers, a treasure of equal or greater value than the one that was left for you.

Another cacher who found this cache is a couple who cache under the handle “jim&annseeker,” and have been caching for over 2 years, ever since getting introduced to the hobby on a camping trip with their son and his friend.

The couple live nearby New Brunswick and come into town occasionally to go caching.  The highlight of their Hub City caching experiences was a cache in Buccleuch Park called the “All Weather Cache,” but they told New Brunswick Today that they prefer caching along “trails and less populated places,” to “city caching.”

The best cache they ever found was in West Virginia, a cache called “The Minister’s Tree House” that was hidden inside an actual tree house.

Jim&annseeker gave advice to new cachers: “It is good to go out with a fellow cachers to clue you in on what to look for. You need to look for things out of place.”

“Cachers are creative so you must be able to think outside the box. If you trail cache, use tick and bug spray and don’t put it on by your car.”

“It is a great way to meet people. It always brings surprises and is inexpensive to do.”

On July 11, this reporter downloaded the free cell phone application from the official geocaching website, and embarked on an adventure through New Brunswick and the Cook/Douglass university campus.

Rudimentary online research showed that I should “wear sneakers,” and, “watch out for poison ivy.” I did not learn the “bring your own pen” tip.

Had I done more research, I may have discovered that geocachers in the past have been arrested for snooping on or near private property, that caches have been mistaken for drug stashes or bombs.

In December 2011, a 21-year-old who went caching in Dresden, Germany was killed while searching for a cache hidden on a small bridge.

But I didn’t know any of that.  Along with a friend, Nathan Savicki, we set out to find our first cache midday on July 13.

The map on the website or app shows a green marker for every cache in the vicinity.  The GPS app showed two caches hidden somewhere near us, including one in Boyd Park.

Clicking on the green mark will bring up the name of the cache and some hints about where to find it, all written by the user who hid it in the first place. Smiley-face markers reveal caches the user has already found, while question marks are caches that no longer exist.

The cache we sought was labeled “Row for Rutgers,” a nod to the school’s crew team, and was placed by user “avgraphics.”

“The cache is hidden near the boat house used by the Rutgers crew rowing team,” read the description.

“What you are looking for is a small, camouflaged container hidden on the edge of the woods that hug the bank of the Raritan River.”

In addition to the description, user avgraphics had left a simple hint, which read: “Green[red].”

Nathan and I did not find this hint helpful.

We walked through Boyd Park, passed the boat house, and approached the edge of the woods.

A tall bush with many red berries and several thorns sat on the edge of the woods, and we poked at the berries with our umbrellas, unwilling to impale our fingers on the thorns just for the little victory of our first cache. No luck.

We walked up the weed-covered hill, around the bush, inspecting it from every angle. No luck.

Next, we walked into the woods, for just a few feet.

The geocaching app gave a ring-like toot.  A message appeared on the screen, notifying me that I was within 30 feet of my target.

On the path in front of us was a dusty, dirty, faded red Rutgers t-shirt. I lifted it up with my umbrella, mindful of the hint, “Green[red],” but there was nothing there.

We searched the woods for fifteen minutes more, on a path covered with other people’s litter and practically paved in broken glass. No luck.

Slightly dejected, we moved on to the next cache the GPS suggested, known as “83 Plum Cache” and placed by user “ramatgan.”

However, the treasure hunt led us not to Plum Street, as the name suggested, but to Antilles Field, located behind Voorhees Chapel on Rutgers’ Douglass campus.

The field now provides a scenic overlook above New Brunswick’s main automobile artery, Route 18, but it existed long before the highway was built.

The description for 83 Plum Cache told us only that “We wanted you guys to see a nice view of the Raritan River,” with the following hint: “Reach over and under.”

More helpful than either of those clues was user “gingkobiloba,” who commented on this cache’s post with a picture of the cache’s logbook with a background of red bricks.

Nathan and I, unfamiliar with the guidelines though we were, decided that the cache we were hunting for was most likely hidden not in the brick Voorhees Chapel itself, but somewhere along the brick balustrade surrounding the field, as user ramatgan had promised a good view of the river.

We walked along one either side of the field, and reached the far right corner, where a look-out station provided a view of the boat house where we’d just failed to find a cache.

I leaned over the brick balustrade, searching for anything that might contain a hidden log book. There were many cracks in the bricks…and brick that jutted out an inch or so, probably loose.

I walked toward the loose brick, and my phone received a second warning: I was within 30 feet of this cache. My confidence grew.

I leaned over the balustrade, reached down to the loose brick, and pulled it out with ease.  But I saw nothing in the hole except for some ants.

“Nathan,” I called to my roommate, “lean over from the look-out and tell me if there’s anything in this hole.”

He leaned over, frowning, and then said, “Yeah, there’s something in there.”

I put my hand in the hole, fished around the rough brick edges for a minute, and then my fingers hit something smooth and plastic. Success! 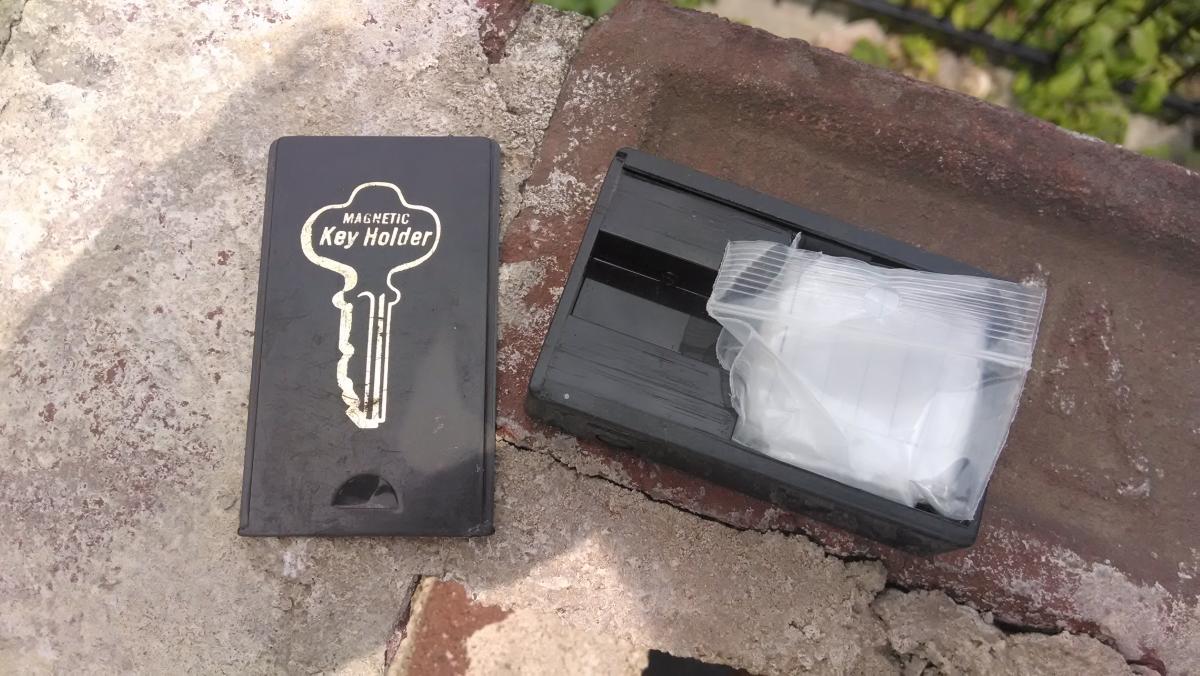 I pulled it out. It was a small, black magnetic key holder.

Inside there was a Ziploc bag and a list of all the people who had found it before us—listed by their online handles, not by name. We had no pen, but vowed to come back and sign it.

Another experienced cacher who found the 83 Plum cache is Bill Davidson, whose online handle is “Traditional Bill.”

Davidson told New Brunswick Today he has found over 3,000 caches, many of them in the New Brunswick area. He lives an hour south of town, and as he says, “Most geocachers who get into the hobby heavily have a tendency to clear out the immediate area around home first and foremost.”

His fondest memory of caching in New Brunswick is of the cache simply called “X,” a pirate’s gold-themed cache near Rutgers Gardens, which has a multiple stages, each stage revealing the clue for the next one.

Davidson has been caching since May 2012. After years of hearing about it but being unable to cache due to a lack of GPS, Davidson says, “a friend of mine reintroduced geocaching to me over a game of cards. That very night we went on our first cache hunt, which was unsuccessful. It wasn’t until the next day that I found my first cache.”

“It’s wise to be prepared and carry plenty of supplies,” he told New Brunswick Today. “If you’re going out into the woods, who knows what you may encounter? Before getting started, it always helps to read the geocaching guidelines.”

Hunting for the next closest cache, called, “Why not use a pinecone?” took us across Cook/Douglass campus, to the area near the Biel Road bus stop, under a tree with five trunks. 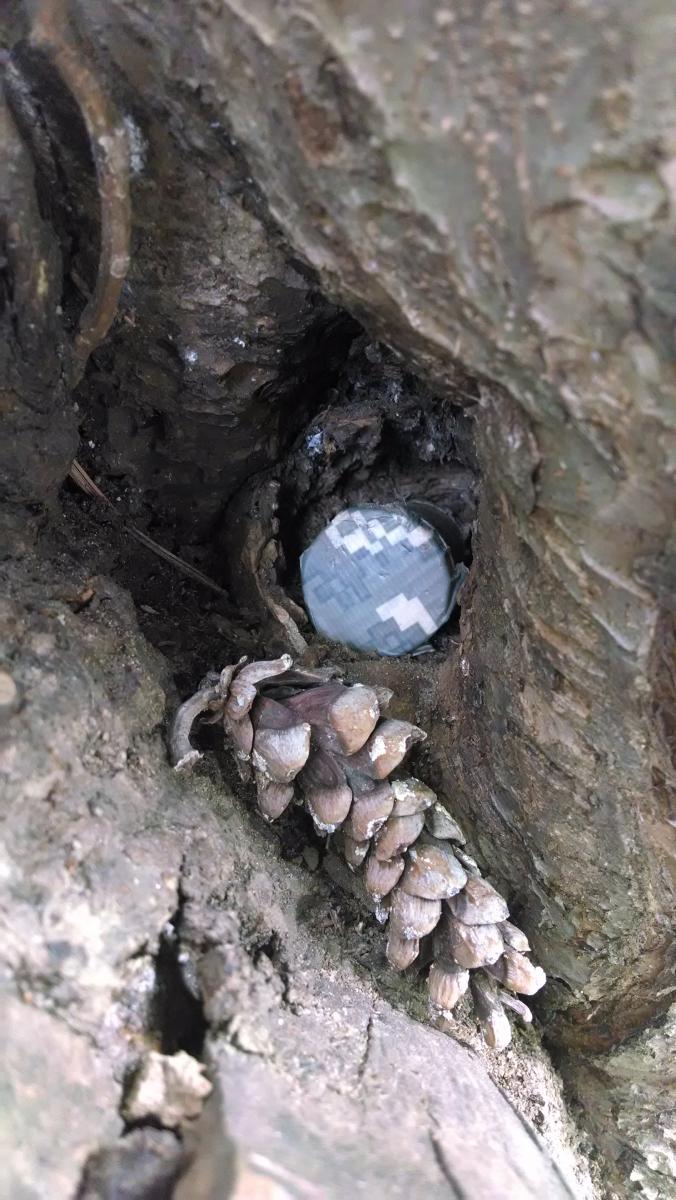 We finally found the five-trunked tree where Ryders Lane intersected with Biel Road.

The cache, this one in an orange pill bottle covered in camouflage-print duct tape, was hidden behind a large pine cone in a hole at the very base, where the five trunks intersected.

Inside the pill bottle, along with the log book, was a quarter and a dime.  Having no pen or pencil, we vowed also to return here.

We took the 35 cent treasure with the giddy joy of children searching for pirate loot, and moved on.

The next closest cache on the GPS was across Route 1.

Where we approached that highway, there was significant traffic going both ways, a cement divider, and no pedestrian crossing. So our adventure was put to an end there.

We returned to our apartment with our pockets not stuffed with gold and silver, but at least a few cents richer than they had been, and we felt the accomplishment of having found our first two caches.

So when we return to sign the logbook at Ryders Lane, we’ll take a pen and something more valuable than a quarter and a dime. Something like two quarters.