UPDATE (11:54am): Middlesex County Assignment Judge Travis Francis ruled that NBToday Editor Charles Kratovil was the prevailing party in the public records lawsuit, and the City of New Brunswick will be required to pay his attorney’s fees.

NEW BRUNSWICK, NJ—The city government has been all over the place in its battle with this newspaper over police transparency.

After requests for maps used to guide the New Brunswick and Rutgers police in their duties were denied by City Clerk Daniel Torrisi in December and January, the author of this article filed a lawsuit that named Torrisi and Rutgers as defendants.

On March 5, the city issued a bizarre and scathing press release saying that the lawsuit had the potential to endanger the safety of the city’s residents.

Police Director Anthony Caputo was quoted in the release as saying, “Information disseminated to the public about what, where and when police personnel are deployed gives the criminal element access to information that undermines and jeopardizes the safety and security of those we serve to protect.”

But, just nine days later, in response to a second records request for similar documents, the city handed over three of the police jurisdiction maps New Brunswick Today had been seeking all along.

That same day, Police Director Anthony Caputo changed his tune and signed an afidavit defending the City Clerk’s decision, saying “the information contained in these specific maps does not expose security of safety measures protected by the police department.”

The maps showed that the Rutgers Police jurisdiction had been sharply cut back in 2004, but the story still appeared to be incomplete as they did not explain apparent changes in jurisdiction that took place on December 6, 2013.

Publicly, the city maintained that they were justified in rejecting the initial request, which they interpreted to include maps that had nothing to do with interdepartmental arrangements with Rutgers, and instead thought the request included various unrelated maps including those depicting drug-free school zones and critical infrastructure.

And now, with the lawsuit appearing all but resolved, the city filed a colorful 28-page response brief that includes extensive attacks on the author of this article.

“It is inconceivable that anyone in the Police Department would have given such information to the Plaintiff, least of all, false information,” reads the document submitted to Judge Travis Francis.  “To do so would serve to only feed the Plaintiff’s fertile imagination of some secret conspiracy by the police to hide information from the public.”

“So left to his own devices, the Plaintiff, who holds himself out as a jounalist, must invent ‘sources’ to support his application before this Court and build upon his spurius claim for attorney’s fees.”

Just days before a scheduled court hearing in the case last week, the City of New Brunswick unexpectedly released an additional map, perhaps the missing link in this story.

“Pursuant to your OPRA request… I hereby supplement the response with the following: Rutgers University color version map,” wrote Torrisi, without further explanation.

The new map is not dated, but is signed by RUPD Chief Barry Roberson, who served from May 2003 until May 2005.  It is not clear whether it predates the 2004 map, but the contrast is very clear.

The additional map shows a huge swath of land where RUPD once had the power, some say until very recently, to enforce motor vehicle laws and make drunk driving arrests.

On the newly-released map, Rutgers jurisdiction including most of the Fifth and Sixth Wards, including much of Easton Avenue and Buccleuch Park, several streets in the vicinity of Rockoff Hall and the Rutgers Police station, as well as several streets near the Cook/Douglass campus, including the Pine Street Park neighborhood.

In each of these areas, Rutgers Police Department apparently no longer has any jurisdiction to give summonses for speeding, reckless driving, drunk driving, or any other motor vehicle offenses.

According to New Brunswick Police Captain JT Miller, RUPD officers can still make traffic stops, but are not permitted to issue summonses in areas outside their jurisdiction. 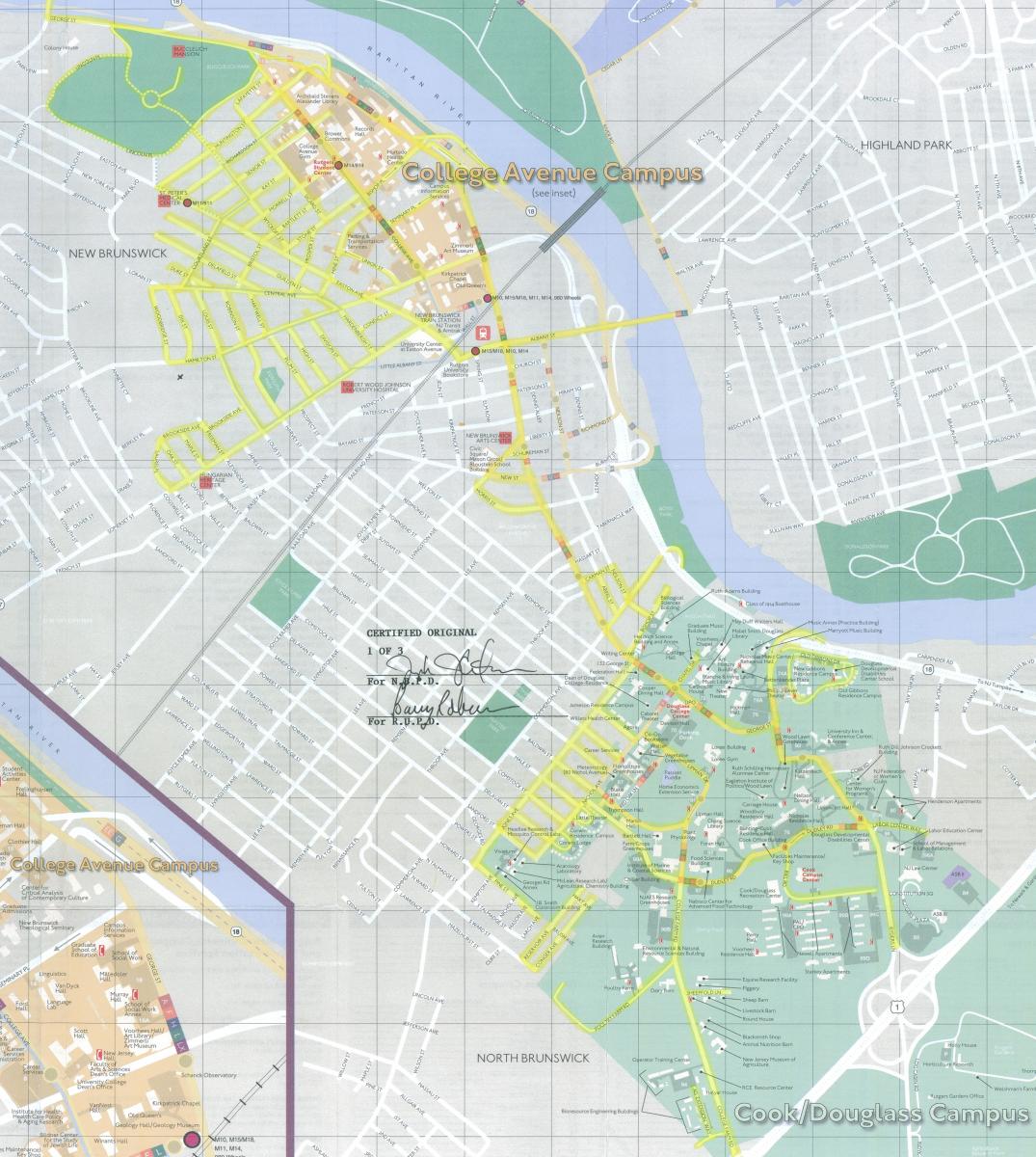