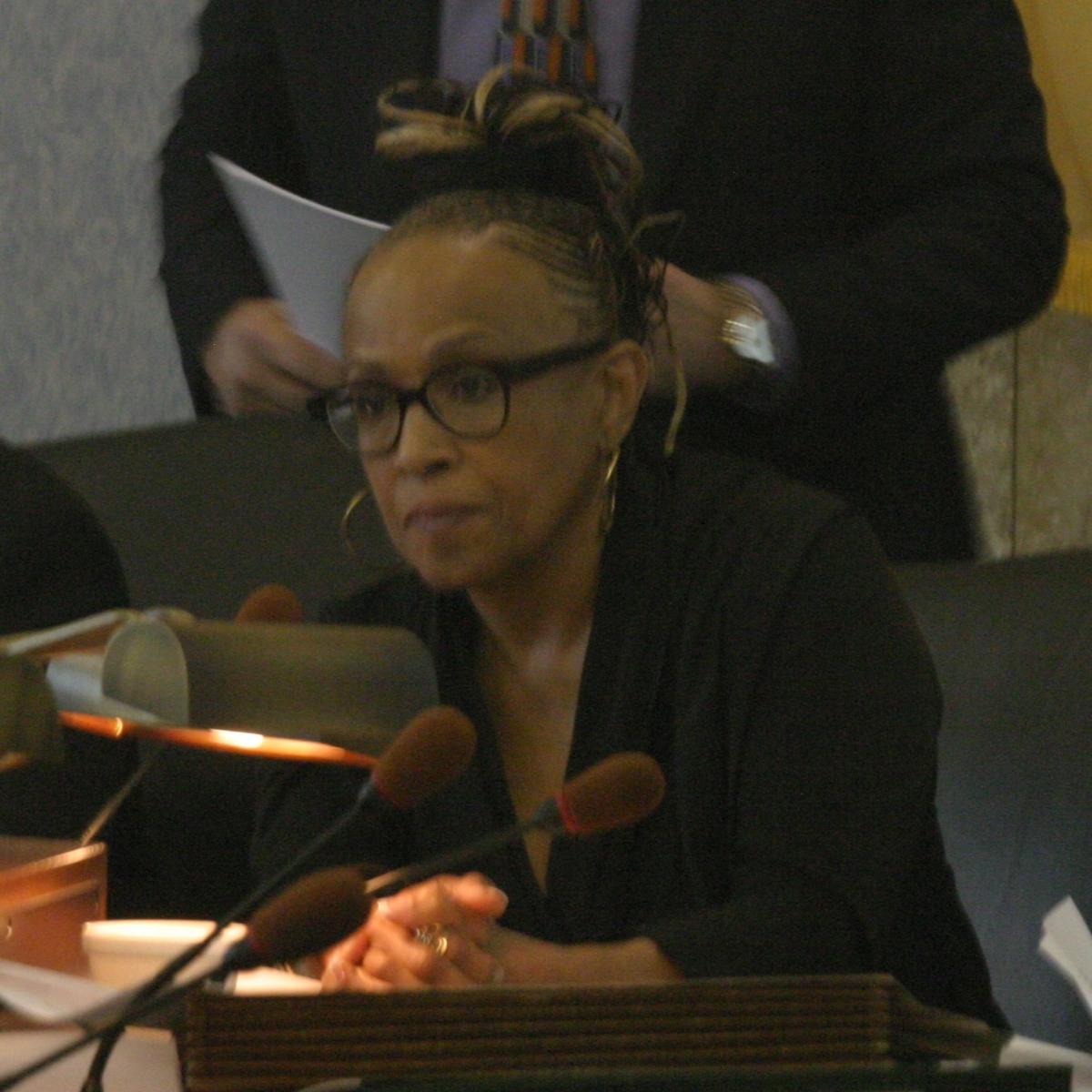 The committee narrowly approved Kaplan by a vote of 8-2, with three abstentions, but not before grilling the former county prosecutor for almost an hour about two issues that New Brunswick Today reported on this weekend.

The issue that drew the most scrutiny from the 13-member committee was the racial slur allegedly said by one of Kaplan's team leaders.

Kaplan admitted that a racial slur was utterred by Manuel Samiero and that Samiero was reprimanded.  But Kaplan defended his decision not to fire him.

The Highland Park resident also had to explain how he failed to notice that the county sheriff had been selling police jobs for years.  Sheriff Joseph Spicuzzo was sentenced to nine years in jail in September.

In a stunning move, Gov. Christie quietly appointed the notorious ex-prosecutor during the lame-duck session of the state government, when a flurry of legislation often leave lawmakers and the media preoccupied.

As we reported earlier this week, Kaplan's nomination was curiously missing from articles published by the Associated Press and Philadelphia Inquirer.

In a deal allegedly cut between State Sen. Bob Smith and Gov. Christie, Kaplan left the prosecutor job to take a $134,500 job in the Attorney General's office last May.  For the past eight months, he worked there awaiting Christie's secretive nomination.

Kaplan will make a $165,000 annual salary as a judge. The term will last seven years before the Governor will decide whether or not to re-appoint him.

The chief concern of committee members was why Kaplan did not fire an assistant prosecutor who allegedly made a racist remark to co-workers in a courtroom hallway in 2009.

Jordan Rickards, an assistant prosecutor under Kaplan, provided a certified statement that Manuel Samiero, another assistant prosecutor, said to colleagues, "Me and Carl are not your n*****s. It’s not our job to push the cart for you every morning."

Rickards' affidavit was made public by the Home News Tribune after it was used in a criminal trial in 2013, shortly before Kaplan left the prosecutor job he had held for eleven years.

Samiero is still employed by the Middlesex County Prosecutor's Office. After the racial slur incident, which occurred five years ago, Kaplan re-assigned him and stripped him of a "team leader" role.

Kaplan squirmed under difficult questioning about the incident from Senator Nia Gill, the only African-American on the judiciary committee.

At first, the nominee admitted that Samiero used the slur, downplaying it because no one heard it except caucasian assistant prosecutors.

"That's the interesting part, Senator, is that the racial slur was used, but the individual prosecutor who made the allegation is a caucasian male," said Kaplan.

But, under questioning, Kaplan distanced himself from the statement.

"Racial remarks were made. The specific racial remarks I cannot corroborate," Kaplan told the committee.  "It was a general racial slur which was alleged to have been said… the assistant prosecutor who brought it forward felt it was directed toward them."

Kaplan said he couldn't say for sure what had been said because of conflicting testimony from his assistant prosecutors.

"I wasn't exactly sure what was said based on everyone's comments. But something inappropriate I believe was said. How inapporpriate was it? Exactly what words were used, I cannot sit here and tell you."

"Did you determine that a racial slur in fact was said?" asked Gill.

"I determined that a racial– I could not put those words in that individual's mouth, Senator," responded Kaplan.

"I could not put those exact words into somebody's mouth, but I felt the intent of what was said was clearly consistent with a derogatory and negative connotation," said Kaplan.

Kaplan alleged that Rickards' testimony was not in line with what he told the prosecutor's office at the time.

"The facts in that story are not as clear as they are represented to be based on the witness interviews," Kaplan told Sen. Mike Doherty, who was the first to raise the issue during the hearing.

"I did take corrective action, regardless of the results of that investigation, and I removed that assistant prosecutor from a supervisory role."

"Regardless of what word was used, I thought the whole incident was inappropriate, lack of professional.  And certainly, if it didn't cross the line, it got about as close to the line as you can possibly get," Kaplan told the committee.

Ultimately, Kaplan let Samiero keep his job but stripped him of his "team leader" status.

"I thought the better course of action would be to remove him from a supervisory role and I assigned him acutally to work under the tutelage of a assistant prosecutor who I had recently hired from [the Office of] Attorney Ethics."

"From a supervisor, I made him a supervisee," testified Kaplan, saying his office took the allegation seriously.

Kaplan could not say whether Samiero received a pay cut, and said he was not given any specific racial sensitivity training.

Gill was not pleased when she learned that Samiero was not required to participate in any racial sensitivity training.

"If you have… a prosecutor who is using racial slurs against another prosecutor, goodness knows what he thinks of the defendants," said the Senator.  "And you do not as part of any disciplinary action require any kind of sensitivity training… So, nothing was done except to move him to another position."

In a final round of questioning, Kaplan's testimony contradicted itself.  First, he said he was unaware that Samiero was promoted and currently serves in a supervisory capacity once again.

Just minutes later, Gill asked again: "You're not aware that he is in a supervisory position?"

Kaplan hesitated during his answer: "I believe that's–He is in a supervisory position."

While Gill pounded Kaplan for his handling of the Samiero matter, Senator Nellie Pou asked Kaplan no less than five times if his office had opened an investigation into the jailed former sheriff of Middlesex County.

Joseph Spicuzzo, a blatantly corrupt sheriff, was elected ten times and also served as the Chairman of the Middlesex County Democratic Organization until he was charged with corruption in 2011.

Kaplan refused to answer Pou's basic question directly until committee chair Sen. Nicholas Scutari re-iterated it, hinting that not answering could cost him the nomination.

But allegations that the sheriff regularly collected bribes from investigators he hired came to the forefront decades earlier in the state's largest newspaper.

"Those allegations against [Sheriff] Spicuzzo I think go back to the early 90's," said Kaplan, who was Middlesex County's official lawyer in 1997 when the Star-Ledger went public with allegations.

"Apparently, it was very clear to a lot of folks that there was some wrongdoing going on, yet you refused to take any action." said Senator Mike Doherty, who abstained from the vote on Kaplan's nomination.

"I believe that the article that you are referring to… indicates that Sheriff Spicuzzo, the allegations ultimately for which he plead, were 1997. I did not take office until 2002," said Kaplan.

In actuality, the allegations Spicuzzo plead guilty to took place throughout Kaplan's term as county prosecutor.  The indictment against Spicuzzo revealed he and his co-conspirators collected bribes in exchange for jobs or promotions in 1999, 2002, 2003, 2005, and 2008.

Pou asked several times for Kaplan to say whether or not he opened an investigation into claims against Spicuzzo, who was Sheriff for thirty years in total, including most of the eleven years Kaplan served as county prosecutor.

"I dealt with them the best way I could and the best way that I knew how, given the facts and given some of the constraints that we might have had at the time," he continued.

But Kaplan still resisted when asked if he himself had opened an investigation into the bribery case.

"Senator, I do not want to state what I opened and what I did not open."

"Were you made aware there was a problem?" asked Senator Nellie Pou.

After the committee chair pressured Kaplan to answer the question, the longtime prosecutor was careful with his words.

"The best way I know how to describe it is any allegations that came to our desk, or were brought to our attention were dealt with."

"When the state called me, when they were doing their investigation, they asked whether or not we had any files. We had opened up files.  I provided those files to the Attorney General's office."

But Kaplan said the investigations he had begun into Spicuzzo were unrelated to bribery in exchange for jobs.

"While I investigated different claims of wrongdoing… the witnesses that ultimately, I believe, led to the conviction came from within the sheriff's department and those individuals never ended up speaking or coming forward to the prosecutor's office."

The sheriff's department and prosecutor's office enjoyed a cozy relationship during Spicuzzo's and Kaplan's time in power.  Eleven of the 51 investigators hired by Spicuzzo, nearly 22%, were eventually transferred to employment in the prosecutor's office.

Only one Senator "enthusiastically" supported Kaplan's nomination.  Not coincidentally, it was Senator Bob Smith, a Democrat who represents several towns including New Brunswick in the state government.

Smith, a former Piscataway mayor who succeeded the notoriously corrupt John Lynch in the State Senate in 2002, moved the nomination and defended the allegations against Kaplan.

"I've known Mr. Kaplan in excess of twenty years," said Smith.  "I would recommend him to you with the accolades of the Middlesex County bar and he's going to make an outstanding judge."

"I think in the same situation, almost any prosecutor would have handled it similarly," Smith said of the Samiero matter.

"Put this in the context of a 25-year career where he has done nothing but good for the people of Middlesex County," said Smith. "He has an unblemished career and I think he's going to make a fantastic judge."

Senator Kevin O'Toole, a Republican, asked a question about the Samiero incident, but voted yes to the nomination anyway.  He said Kaplan should have fired Samiero, but that one mistake should not cost him the judgeship.

Democrat Senator Ray Lesniak  decided to abstain from the vote, citing the Samiero incident: "The nominee thought this person was culpable, that's why he demoted him. If he was culpable, he should have been fired."

Another Democrat Senator who serves as the Majority Leader, Loretta Weinberg, also abstained from the vote.

The other two female legislators on the 13-member committee, Pou and Gill, were the only ones brave enough to vote no to Christie's controversial nomination.

Later in the day, the full Senate approved his nomination by a vote of 26-7.

Each of Middlesex County's seven senators, including five Democrats and two Republicans, had the opportunity to block Kaplan's nomination but chose not to.

Christie's opponent in the general election, State Sen. Barbara Buono of Metuchen, was one of them.  In 2007, Kaplan hired Buono's daughter Allegra Bitterman to an investigator position in the prosecutor's office.

Sen. Sam Thompson, of Old Bridge, also serves as the Chairman of the Middlesex County Republican Organization.  He too signed off on Kaplan's nomination, which was set to expire this week.

Thompson likely allowed Kaplan's nomination to be heard because he wanted another open judgeship to go to Republican Marcia Silva of East Brunswick.

Silva is the wife of East Brunswick Mayor David Stahl.  Her nomination was unanimously approved by the judiciary committee following Kaplan's hearing.

Two additional Middlesex County judges were approved by the Senate on Monday: Michael Cresitello of Middlesex Boro, and Timothy Lydon of East Brunswick.