A State Senate committee is expected to decide whether or not to approve Kaplan's judgeship in Trenton tomorrow.

Kaplan had been heavily criticized by victims, defendants, and his own staff during his eleven-year reign as Middlesex County Prosecutor, a tenure that abruptly ended last May amid a barrage of allegations against him.

Among them are claims that Kaplan hired and protected racist assistant prosecutors, turned a blind eye to widespread and apparent corruption, gave preferential treatment to political allies, and retaliated against a female investigator who complained she was passed over for promotions.

When Christie announced he would replace Kaplan last year, the change was welcomed by the New Brunswick community.

"Change is good," said New Brunswick City Council President Rebecca Escobar, when asked about Kaplan's departure.  But it soon became clear that Kaplan would land on his feet, thanks to Governor Christie and his Attorney General Jeff Chiesa.

Many of the allegations against Kaplan have not been researched by the members of the Senate committee that will decide whether or not to confirm his nomination tomorrow, according to sources.

As U.S. Attorney, Christie helped to imprison the city's notorious ex-mayor John Lynch on federal corruption charges.  Lynch did three years in jail, but continued to be active in government affairs during his time behind bars.

But as Governor, Christie and his administration inexplicably hired Kaplan, one of Lynch's closest allies, to a $134,500 job in the Attorney General's office, just days after he left the prosecutor job in disgrace.

And now, the Senate Judiciary Committee seems poised to approve Bruce Kaplan's nomination without vetting his credentials, which has many locals concerned.

Unlike several other judicial nominations made during the final days of Christie's first term, this one has not been reported. Kaplan's nomination was inconspicuously omitted from articles published by the Associated Press and the Philadelphia Inquirer.

Now that news of Christie's nominating Kaplan to the bench has spread, many county residents are up in arms.

"The lack of leadership coming from Bruce Kaplan was an embarrassment to… Middlesex County during his entire career as a county prosecutor," said activist Tormel Pittman.

"This appointment is just a reflection of Governor Christie's horrible decision making."

If the Senate committee does not approve Kaplan's nomination before this Tuesday, when the Governor's second four-year term begins, it will expire.

The committee is comprised of eight Democrats and five Republicans, but any of the Senators who represent Middlesex County can block the nomination.

A spokesman for Governor Christie, Colin Reed, did not respond to a question asked by New Brunswick Today about the nomination. 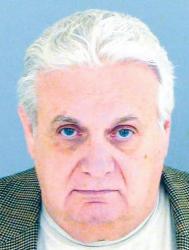 Bruce Kaplan's office was known for turning a blind eye to criminals who were supported by the political establishment in Middlesex County, including the number two law enforcement official in the county.

Critics say Kaplan apparently ignored the widespread corruption of longtime county sheriff Joe Spicuzzo, who for many years charged his own officers bribes in exchange for jobs and promotions in 2012. Spicuzzo was sheriff for thirty years.

But his schemes were no secret.  The Star-Ledger reported allegations that he sold the police jobs in 1997, while Kaplan was serving as the top attorney for the county government.

And when Spicuzzo was finally charged with official misconduct in 2011, it was the State Police and not county officials that brought the case.  Though Spicuzzo nearly got off on a technicality, pleaded guilty in 2013 and is now serving a sentence in state prison.

Kaplan not only did nothing to investigate Spicuzzo, but he frequently agreed to transfer many of Spicuzzo's cronies into his own office.

The Middlesex Prosecutor's Office also looked the other way when it came to four-term Perth Amboy Mayor Joe Vas, who was convicted on corruption charges and is currently serving a six-and-a-half year federal prison sentence.

Kaplan also turned a blind eye to local corruption in New Brunswick including election fraud and a sophisticated drug and weapons sales organization that operated for many years and included at least three public employees.

"To have a major drug dealer right downstairs from you and not have a clue tells us [what] type of county prosecutor you were," said Pittman, referring to the recent arrest of Michael Mahony, New Brunswick's chief housing inspector for dealing cocaine.

The Middlesex County Prosecutor's Office is located on the third floor of 25 Kirkpatrick Street, directly above the city's inspection office.  Mahony was caught with a distribution quantity of drugs in his city-owned vehicle, as we reported last week.

ALLEGATIONS OF RACISM IN KAPLAN'S OFFICE

The city's mayor paid $1,000 from his campaign fund towards the man's funeral expenses and the officer resigned rather than face departmental charges.

But Kaplan's office made sure that Berdel was not indicted by a grand jury for the murder of Deloatch.

Nicholas Sewitch, a 28-year veteran prosecutor who made the presentment to a special grand jury about the killing, abruptly resigned shortly after a grand jury failed to indict Berdel.

Rumors swirled that Sewitch, the man who handled all homicide prosecutions in Kaplan's office, was pushed out of the job because he himself was under investigation.

In another case, Kaplan supported an assistant prosecutor who used a racial slur against African-Americans.

Manny Samiero, an assistant prosecutor who has since been promoted, allegedly used the slur among his colleauges in the hallway of the Middlesex County Courthouse in 2008.

Jordan Rickards, a former employee of Sameiro's unit, certified that Samiero said the following loudly in a courthouse hallway: "Me and Carl are not your n*****s. It’s not our job to push the cart for you every morning."

Another assistant prosecutor who witnessed the incident would later end up in private practice, defending two people of color accused of serious crimes.  The attorney took objection to Sameiro prosecuting the case on the grounds he was a racist.

Shockingly, in response, the Prosecutor's Office did not deny Sameiro had used the slur, and in fact Kaplan's statement to the press seemed to confirm that Sameiro had done so.

"The alleged statement was made to members of the Middlesex County Prosecutor’s Office and was in no way related to the pending case or to any case pending at that time."

Sameiro continues to be employed at the Middlesex County Prosecutor's Office in a supervisory capacity.

KAPLAN HELPED REAL CRIMINALS GET OFF THE HOOK

In an astonishing case of corruption involving the city's Parking Authority, Kaplan's office pressed hard for a conviction against two low-level employees accused of stealing as little as $700.

But, Michael Lapidus, a high-ranking official at the authority charged with the same crimes, was permitted to enter into pre-trial intervention (PTI) on the condition that he re-paid $24,000 in stolen funds.

PTI is a program intended to rehabilitate first-time offenders through probation, dismissing the original charges and leaving the offenders without a criminal record.

Witnesses in the trials said that they saw money from parking machines in Lapidus' pockets, and that Lapidus left cash in his office, put vaults full of coins in his personal car, and counted cash in his office rather than in the videotaped security rooms designated for that purpose.

After escaping the charges and avoiding jail, Lapidus was hired by a firm that does business with the authority.

Mitch Karon, the authority's Executive Director, testified that he was aware of Lapidus' financial missteps but he was never indicted.

Treated as the "victim" of the thefts, Karon said he agreed to PTI for Lapidus because he was re-paid the stolen money and because his wife Holly Lapidus-Williams continued to work for the agency, which "created an uncomfortable situation in the office."

Bob Makin of the Home News Tribune wrote a scathing editorial last year indicating that one reason that Kaplan did not pursue a conviction of Lapidus, "may be found in the relationship between [former Mayor John] Lynch and Middlesex County Prosecutor Bruce Kaplan, as well as Lynch’s connection to Georgetown University Law Center roommate John Hoffman.

"Counsel for the New Brunswick Parking Authority, Hoffman is a shareholder in the powerful Wilentz firm."

A PROSECUTOR WHO PROTECTED HIS POLITICAL ALLIES

The county government's official attorney since 1994, Kaplan rose to power thanks to his connection to powerful State Senator John Lynch, who also served as New Brunswick's Mayor from 1979 to 1991.

Lynch, a Democrat, was widely understood to be the political boss of Middlesex County, and one of the most powerful politicians in the state.

"Some have questioned that Kaplan continues to lunch with Lynch, saying that it is inappropriate for an officer of the court to associate so closely with a federally convicted felon," wrote Makin during Kaplan's final days as prosecutor.

"Kaplan also has been seen with Lynch coming in and out of the offices of Laurie Dvorak, Lynch’s daughter-in-law and an insurance attorney for the county."

"Despite a ban from public office, Lynch’s influence on, control over and manipulation of the New Brunswick Parking Authority, the Middlesex County Prosecutor’s and other government agencies remains evident," wrote Makin.

Shortly before leaving elected office for good, Lynch helped cultivate the candidacy of James McGreevey, a Woodbrige mayor who was elected Governor in 2001 before resigning in disgrace.

Kaplan was a partner in a law firm, Kelso & Kaplan (since re-named Kelso & Bradshaw), which also serves as headquarters for the New Brunswick Democratic Organization.

In 2005, Gov. Jon Corzine re-appointed Kaplan to the post where he served until last May.

During Kaplan's tenure, his office was accused of nepotism and preferential treatment for favored political allies, such as the hiring of Patrick Barnes, the brother of Assemblyman Peter Barnes.

"After being named by USA Today as one of the 100 worst bosses in the country, Barnes was fired as Hunterdon County prosecutor in 2010, yet within six months, Kaplan gave him a $100,000 job," wrote Makin.

On the same day that Kaplan resigned, Barnes' father Peter Barnes II announced he would not seek another term as Chair of the Middlesex County Democratic Organization, the position previously held by Spicuzzo.

Kaplan was also accused of showing preferential treatment to the son of Assemblyman Joseph Cryan. The younger Cryan was involved in a road rage assault incident, where he beat a victim with baseball bat in 2002.

The case was moved from Union County to Middlesex County, where Cryan was only punished with probation, which he eventually violated twice.