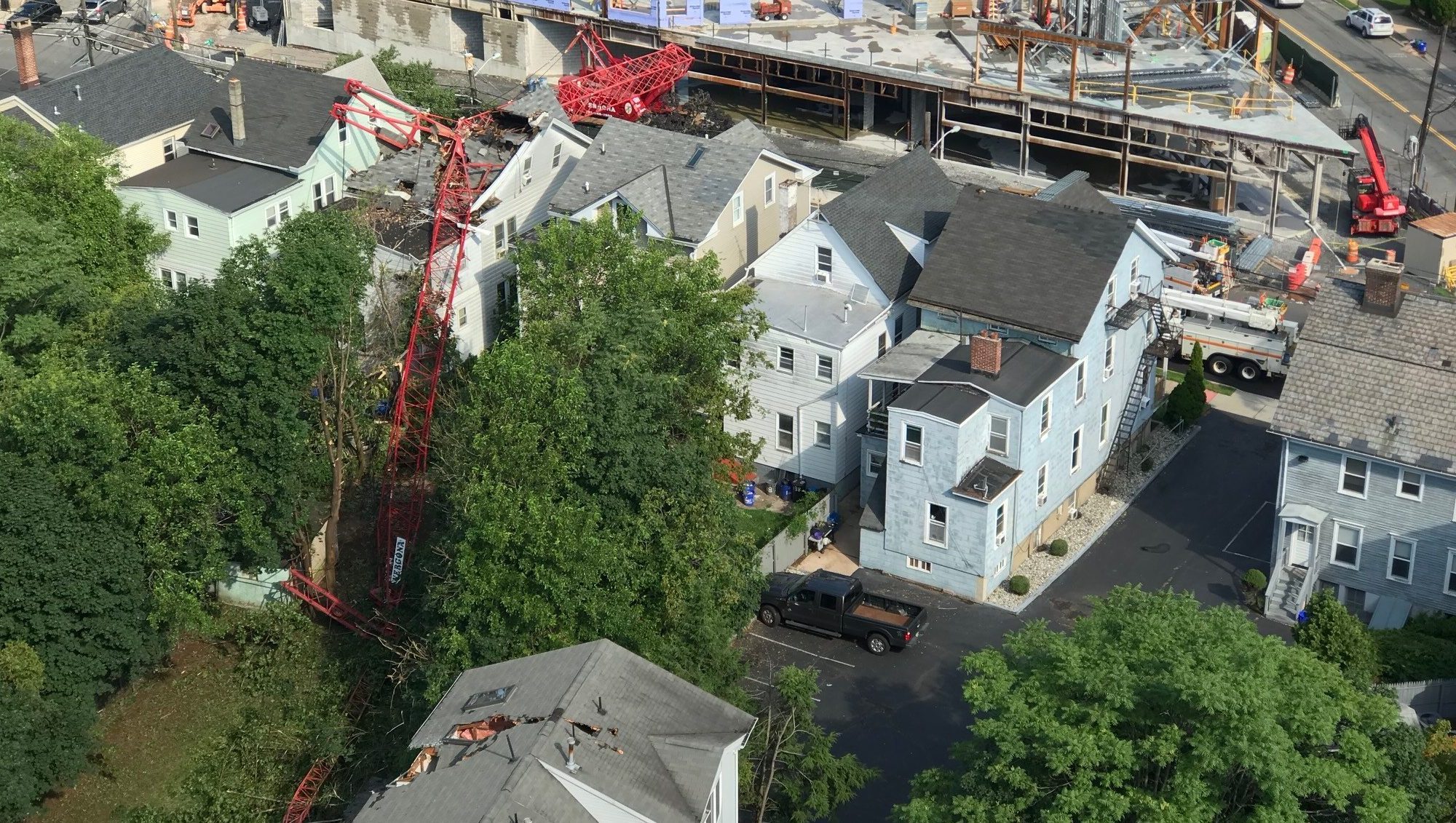 After 6-Month Lapse in Compliance, Crane Permit Was Issued 12 Days Before Collapse

INTERIM CITY ENGINEER: “I DIDN’T HAVE ANYTHING TO DO WITH THAT.”

NEW BRUNSWICK, NJ—The construction crane that came crashing down on two homes during a July 21 storm was apparently operated without a proper city permit for over six months, according to records obtained by New Brunswick Today.

Vergona Crane Company, Inc.’s 2019 permit application is dated July 9, just 12 days before the crane failed, and more than six months after a previous permit had expired.

The head of the city’s Department of Public Works and Engineering (DPWE) admitted on August 22 that he signed to approve Vergona’s late permit application, even though a city ordinance regulating construction cranes only authorizes “the city engineer” to issue or deny such a permit.

The crane was located along Hamilton Street since it first arrived last fall, lifting large panels for a 9-story private apartment building under construction at the intersection with Easton Avenue.

Title 15, Chapter 32 of the city’s ordinances requires all construction cranes with a lifting capacity of ten tons or more to be registered with the New Brunswick city government, and sets the standard 60-day permit fee at $100 per crane.

“Upon receipt of a properly completed application… the city engineer shall issue or deny the requested permit within three working days,” reads the ordinance.

But the only person currently allowed to use that job title has denied any involvement in approving the permit for the doomed crane.

“I didn’t have anything to do with that… I did not sign off on that,” Marcelli told New Brunswick Today on her way out of a Technical Advisory Committee meeting on August 21.

Marcelli is a Senior Vice President for the private firm Hatch Mott Macdonald, which has done work for the city’s Water Utility and Planning Department for many years.

Through her company, she also serves as Township Engineer for Clinton Township and the Planning Board Engineer in Bernards Township.

Marcelli said that she believed her predecessor, Richard Moody, had granted the approval. But Moody was long gone by the time the crane company finally filed their 2019 permit application.

DPWE Director Thomas Valenti admitted he has been issuing city crane permits for the past two years, even though he is not a licensed engineer in New Jersey.

On July 9, Valenti says he signed off on the crane company’s late application, which actually requested permission to use two cranes on the site for the second half of 2019.

As we reported last year, Mayor Jim Cahill placed Valenti at the helm of two city departments, Public Works and Engineering, shortly before combining them into one.

“With Rich [Moody]’s permission, I started signing [permits] about a year into his tenure,” he said referring to the former City Engineer, who started on April 4, 2016 and left this year after his three-year term expired.

“I had been signing two years prior to him leaving, again, with his permission,” said Valenti.

On a single application form submitted for two Vergona cranes at the site, Valenti’s signature appears on the line labeled “City Engineer,” with the word “Assistant” scribbled in before the official title. A field labeled “Remarks by Engineer” is left blank.

Valenti, an elected Democratic Committeeman whose mother is a Middlesex County Freeholder, also serves as Treasurer for the New Brunswick Democratic Organization, which has supported Cahill in each of his eight campaigns for Mayor.

Valenti told New Brunswick Today he was confident that it was okay for him to sign the permit application instead of the City Engineer, and it had become the norm for him to sign off on permits like the one in question since 2017.

“I believe the interpretation was, even though it doesn’t necessarily say it” in this ordinance, Valenti said, “other sections” include the words “or his designee” when they mention the position of city engineer.

City Attorney TK Shamy did not respond to an emailed question about the legality of Valenti signing off on crane permits instead of a qualified municipal engineer.

In response to questions from this reporter at an August 7 public meeting, Shamy told the City Council that he had reviewed the paperwork related to the crane, and found that “Everything is in order.”

Valenti admitted, however, that the crane company had lapsed in compliance with the ordinance since January.

Only after the department received a July 1 call about bringing a second Vergona crane to the site were the outstanding fees and paperwork resolved.

“That’s when we said, ‘Wow, wait a minute you guys,'” Valenti said, assuring this reporter that “all the insurance documentation was in place, so that never lapsed.”

Valenti attributed the delay in the renewal application to confusion about the expiration date of the initial permit because the city does not allow permits to extend from one calendar year to another.

Valenti also signed off on the company’s 2018 application for a crane permit, which requested approval for one crane from December 1, 2018 through June 1, 2019.

The ordinance says nothing to prevent permits extending from one year into the next, but even though Vergona paid $100 for a 60-day permit, this permit was cut short to just 31 days so that it would end along with the year 2018.

The application appears to be marked up by city officials, who noted the company “MUST RE-APPLY FOR JAN-JUN 2019.”

But, during those next six months, the city took no corrective action, even as the crane continued to operate in plain sight without a current permit.

The crane permit application form states that “Any person who shall violate any provision of the City Ordinance regarding the placement of cranes… shall be liable for a fine not to exceed Five Hundred ($500.00) Dollars and/or imprisonment for a period not to exceed ten (10) days.”

Officials at Vergona and Collegiate Development Group (CDG), the building’s developer, did not respond to multiple inquiries about the incident.

CDG’s lawyer at the New Brunswick Zoning Board was Thomas F. Kelso, who also works as Middlesex County Counsel. He declined to comment on the record after a recent Freeholders meeting.

The general contractor for the site, Structure Tone, promised to answer New Brunswick Today’s questions, but has not yet done so.