CARTERET, NJ—A local police officer, one who happens to the Mayor’s brother, continues to be paid a $49,266 salary despite being suspended while he is under indictment for criminal charges related to his public job.

Officer Joseph Reiman, the 31-year-old brother of Mayor Daniel J. Reiman, was indicted September 28 on charges of aggravated assault and official misconduct.  He was later indicted again on a charge of tampering with public records.

The charges all stem from a violent incident on May 31, 2017, where Joseph Reiman was caught on video beating up a joyriding 16-year-old who had just crashed a vehicle that he had been chasing.

Despite only being on-duty for less than two years, Joseph Reiman had ascended to being, by far, the most violent officer in the department, according to an analysis of use of force reports conducted by a reporter.

The report also indicated that Joseph Reiman was hired “as a disabled veteran after serving in the United States Marine Corps for almost eight years.”

Middlesex County Prosecutor Andrew C. Carey, whose office secured the indictment from a grand jury sitting in New Brunswick, has characterized Officer Reiman’s actions as “assaulting and causing significant bodily injury to a teenager during an arrest.”

“After the teenager exited his vehicle, Officer Reiman, while on top of the teen, punched the teen several times with a closed fist,” reads a staement issued by the Middlesex County Prosecutor’s Office (MCPO).

“Following the assault, an ambulance was not called to the scene. Instead, the teenager was placed in a patrol car.”

NJ.com’s Craig McCarthy exposed that Joseph Reiman was “responsible for more than one-fifth of all arrests involving force recorded by the department over a 23-month period,” an astonishing statistic given there are 49 other officers on the force.

But, even Joseph Reiman’s questionable history didn’t stop a “hearing officer” hired by the borough from restoring the suspended officer’s pay back at the end of June 2017.

That hearing officer, Brian Kronick, had just left his job at the powerful law firm of Genova Burns to launch his own company: Kronick Resolutions.

Kronick ruled that the borough did not have “just cause” to suspend Officer Reiman without pay, and since then, the borough has continued to send him payroll checks. 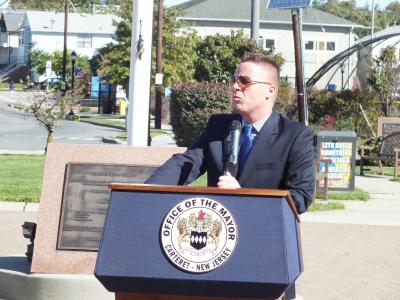 Dan Reiman was first elected Mayor in 2002, and in 2011, he unsuccessfully sought the powerful position of Chairman for the Middlesex County Democratic Organization (MCDO).

He currently serves as the MCDO’s Treasurer, and with an annual salary of $102,610 paid by borough taxpayers, he is also one of the state’s highest-paid mayors.

Now in his fourth term as Carteret’s Mayor, he will have to decide this year if he wants to seek a fifth term as leader of the borough of almost 24,000 residents.

As Mayor, Reiman has cast doubt on the indictment against his brother, who he reportedly claimed was one of the department’s best officers, according to an article by the Home News Tribune’s Nick Muscavage.

“The officer will have his day in court just like anyone else… They can indict a ham sandwich,” Reiman said.  “He’s very well trained.”

Mayor Reiman also participated in a fundraiser for an organization that may is rumored to be raising funds to pay for his brother’s attorney, Charles Sciarra.

As reported by NJ.com’s McCarthy, the Blue Shield Benevolent Fund’s October 16 golf outing helped bring in donations from several donors, ” the majority of which have ties to Carteret or contracts with the borough.”

The non-profit organization was created on June 16, just one week after the Mayor’s brother was criminally charged.  Its leaders include Ronald Gardner Jr., who also helped Reiman start another charity, the H. Truman Social Club, in 2011, and Mark Razzoli, a former Jersey City police officer who was recently elected to the Old Bridge Town Council.

The Carteret Police Department (CPD) is currently led by Police Director Kenneth Lobrato, only the second person to hold that title in the borough’s history.

Lobrato, a former Assitant Prosecutor with the MCPO, took office in November 2017, nearly six months after the assault.  He did not return a phone call from New Brunswick Today for this article.

Mayor Reiman’s previous pick for Director, Ronald Franz, lasted just three weeks in the job before being arrested for leading police on a chase that led to a crash while drunk driving in Old Bridge.

Joseph Reiman isn’t the only one of Mayor Daniel Reiman’s brothers on the city’s police force.  Officer Charles Reiman was the second officer on the scene the night his brother Joseph beat up the teenager, but Charles Reiman has not been charged.

Prosecutors say that the grand jury indicted Joseph Reiman on three counts of official misconduct because, in addition to the unlawful assault, the officer also failed to activate his “body-worn camera” and failed “to use reasonable discretion or restraint in the amount of force used to apprehend the teenager.”

The MCPO credited their Detective Andreea Zebib and CPD Captain Michael Dammann with the investigation, and Assistant Prosecutor Christine D’Elia with presenting the case to the grand jury.