HIGHLAND PARK, NJ—Documents released in response to a lawsuit against the Middlesex County Prosecutor’s Office (MCPO) reveal inconsistencies in their official story of a man who died hours after police interacted with him last year.

This much is clear: Police found 28-year-old Daniel Nagahama alive, but the young man’s life came to an early end just hours after his run-in with cops led him to be taken to a hospital in the Hub City.

But the reports reluctantly released by the MCPO cast doubt on their claims that Highland Park Police Department (HPPD) officers “revived [the man] when they found him laying on a street.”

Rather, the documents appear to confirm that four different HPPD officers used their hands or fists on the victim, while another sprayed him with a “chemical/natural agent.”

The fate of the public documents, known as “use of force reports” (UFR’s), were previously in legal limbo thanks to conflicting court decisions about whether they must be released under the NJ Open Public Records Act (OPRA). 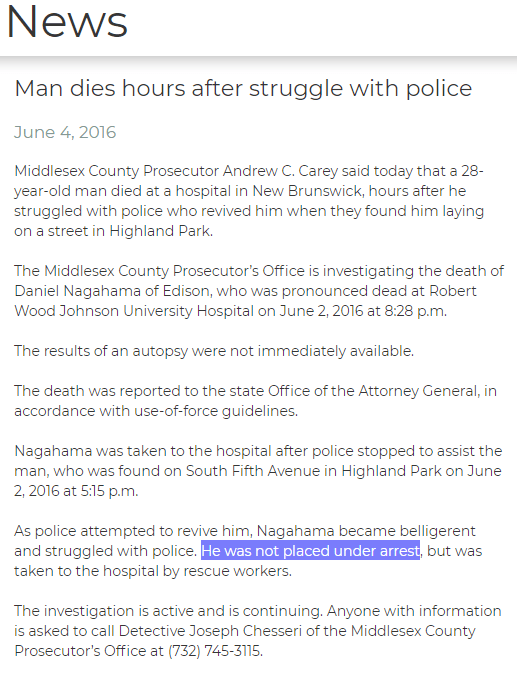 Part of O’Neill’s statement, the only official release so far on Nagahama’s death, has since been contradicted by official police documents released after the MCPO lost a lawsuit brought against them by a group of transparency activists.

“As police attempted to revive him, Nagahama became belligerent and struggled with police. He was not placed under arrest, but was taken to the hospital by rescue workers,” read the statement, which was blasted out to the media at 1:18pm and remains on the county’s website to this day.

Sergeant Jason C. Culver and officers Brian O’Mara, Kevin M. Garrity and Christopher DeCosta also reported using their hands or fists on Nagahama, who was “under the influence” and “resisted police officer control,” also using a “compliance hold” on him. 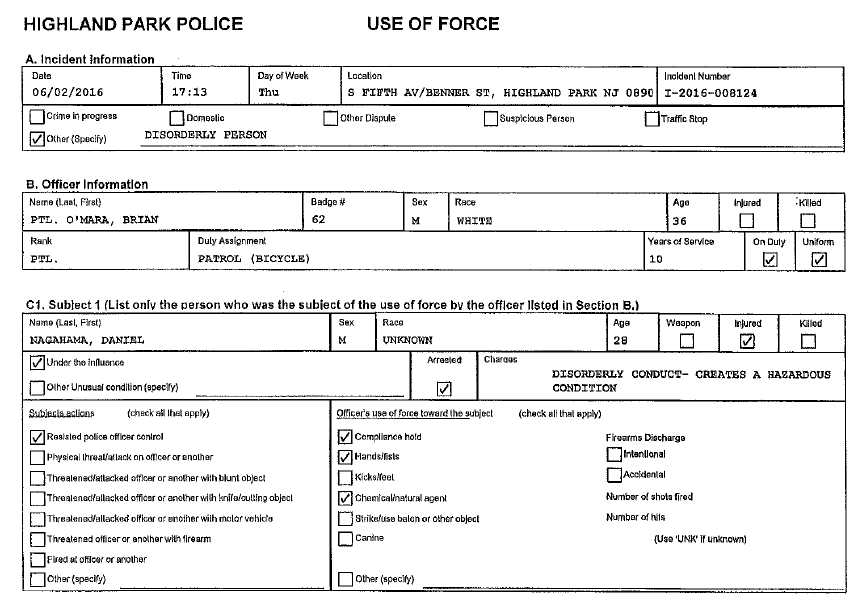 Additionally, Officer O’Mara’s report indicated that he used a “chemical/natural agent” during his encounter with Nagahama.

All of the reports except for Officer DeCosta’s were signed on the night of the incident, but DeCosta’s signature was dated October 14, 2016, more than four months later.

O’Neill, a former Star-Ledger journalist, was well-known for stonewalling reporters after he switched sides, leaving journalism to work for Carey’s controversial predecessor Bruce Kaplan in 2010.

After Carey took over the MCPO in 2012, O’Neill continued to serve as public information officer and custodian of records, until recently when he quietly left county employment after almost eight years on the payroll.

The documents that exposed O’Neill’s false statement were made public in response to a November 2016 ruling by the county’s former Assignment Judge Travis Francis.

But it wasn’t until after those records were finally released this July by NJ Open Government Notes that the omissions and inaccuracies in O’Neill’s original statement entered the public domain. 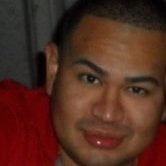 “On behalf of Dan’s colleagues at Centron, I wanted to extend our deepest sympathy to Dan’s family,” wrote colleague Letty Albarran in a comment on an online obituary.  “It was a pleasure to work with Dan and he will be greatly missed. Our thoughts and prayers are with Dan’s family.”

Prosecutors still haven’t said what they believe led to Nagahama being sprawled out in the street when police found him in the first place.

New Brunswick Today previously reported that emergency radio transmissions indicated the Highland Park First Aid Squad was dispatched to respond to a “pedestrian struck” with “unknown injuries” at roughly the same time and location that police say they found Nagahama.

O’Neill’s statement made no mention of any car crash being involved in the death of the 28-year-old, and it did not explain how the police learned about the distressing situation.

Within days of O’Neill’s questionable statement to the press, citizens were using the state’s open public records law to ask him for documents that might shine a light on the case.

At first, O’Neill tried to respond to Paff’s requests for documents with nothing more than a copy of the June 4, 2016 press release that included the false claim that Nagahama was not placed under arrest.

Paff responded with his objections, but O’Neill never issued any further statements or released any of the requested records.

He then filed a subsequent request for further records, and that request yielded only a few insignificant emails and explicit denials of his right to access the UFR’s, incident reports and other records.

“In this case, the prosecutor has kept the public completely in the dark,” Paff’s lawyer CJ Griffin told the Home News Tribune.  “It is a shame for law enforcement agencies to fight so hard against access to these very basic administrative forms.”

Judge Francis’ ruling did not give Paff everything he had sought, authorizing the release of the requested UFR’s, but denying access to other police reports, and those filed by emergency services personnel.

As a result of their unsuccessful position fighting against releasing the UFR’s, the MCPO agreed to pay $8,300 in taxpayer funds to support the LFTG’s court costs and Griffin’s attorney fees.

It’s not the first time that O’Neill, who earned a salary of $68,884 at the end of his career, was caught disseminating false information.

In 2014, this reporter was removed from the MCPO’s press list after pointing out an incorrect date in O’Neill’s statement on a murder in New Brunswick. 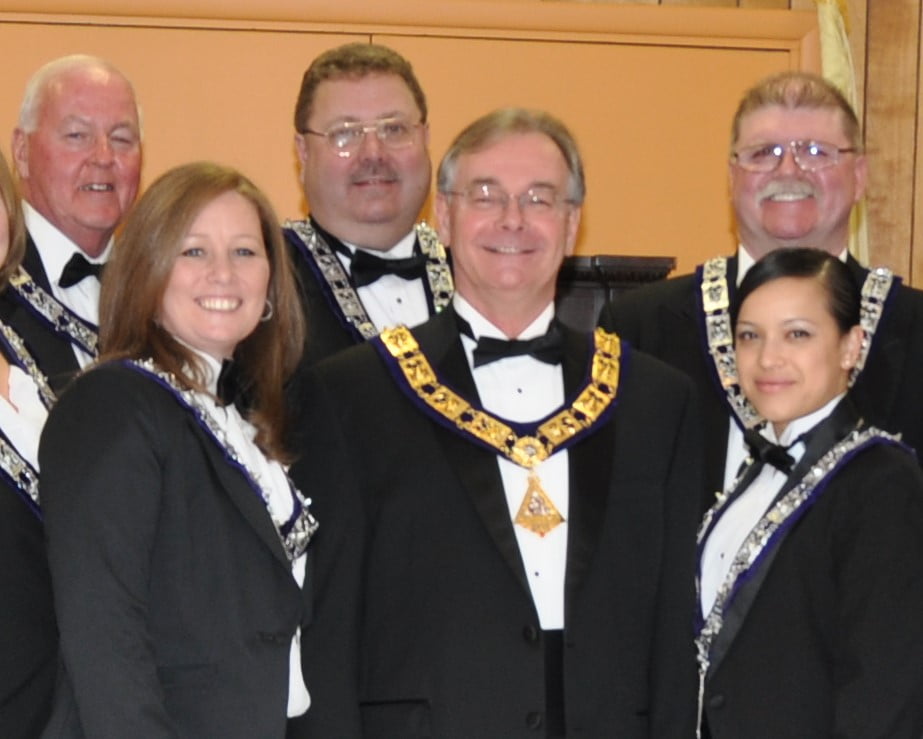 Around that time, O’Neill served as the so-called “exalted ruler” of the city’s local lodge of the Benevolent Protective Order of the Elks (BPOE), a secretive organization that includes many law enforcement officials, including cops, prosecutors, and judges.

That role put O’Neill in a tricky situation after the lodge’s Treasurer, who was also a high-ranking official in the city government, got busted by State Police with a “distribution quantity” of cocaine in his city-owned truck during late 2013.  Rumors swirled that the official, Chief Housing Inspector Michael Mahony, had also stashed cocaine in the safe at the Elks Lodge.

The bust eventually led to an article showcasing what appeared to be special treatment that the MCPO was showing a connected employee of the Middlesex County Sheriff’s Office who had been jammed up in the same drug case.

O’Neill repeatedly gave this reporter the run-around when it came to questions about the State’s case against Scott Campion, a matter that was quietly remanded to municipal court by the MCPO.

After that scathing article was published in February 2015, O’Neill permanently removed all of New Brunswick Today’s reporters from the list of journalists that are emailed with the agency’s press releases.

Reliable sources have told New Brunswick Today that O’Neill was forced out of the job not because of his false statement in the Nagahama case, but instead because it was discovered he had been using his work computer inappropriately.

County officials have been reluctant to say why O’Neill left, and his successor has refused to respond to repeated requests that New Brunswick Today be restored to their press email list.

The county’s elected Freeholders have been quiet about the Nagahama case, and about O’Neill’s departure.

“I can’t answer why he left.  I don’t know,” said Freeholder Director Ronald Rios on September 28.  “It’s not our job to investigate the Sheriff or the Prosecutor.”