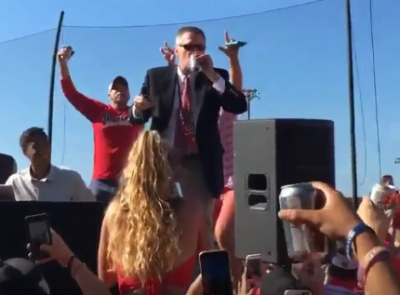 PISCATAWAY, NJ–Rutgers University pulled the plug on its new official student-tailgating lot, “The Alley,” which was shut down after just two home football games.

Rutgers’ official athletics Twitter account @RUAthletics tweeted on September 20 that “The Alley” will shut down “due to safety concerns.”

The tailgate party had been located in the narrow gravel lot, across the street from Werblin Recreation Center on Busch Campus.

This tailgate was open to all Rutgers students, and student organizations were able to retrieve one parking pass per organization.

According to their source, the Daily Targum reported, “The decision was not made by the Rutgers Athletic Department.”

At “The Alley” tailgate prior to the Rutgers-New Mexico game on September 17, Athletic Director Patrick Hobbs, was videotaped drinking a beer during an address to the students in attendance.

Hobbs told NJ.com’s Keith Sargent that drinking the beer, which had been offered to him by a student, was “a mistake.”

“I regret that any action on my part can be interpreted as promoting the use of alcohol,” he told Sargent. “That was certainly not my intention.”

Hobbs’ remarks to the rowdy crowd initially garnered boos when he spoke favorably of the RUPD, but he slowly won the crowd over.

Turning down the offer of a beer at first, Hobbs said, “No, I can’t drink that right now. No.”

“If they card me, I’m okay… Go RU!” Hobbs said before drinking the beer as the crowd cheered.

Videos and pictures of Hobb’s appearance circulated on social media over the weekend.

But only after the New Brunswick Today Show aired the videos on September 20 did the school move to permanently put an end to the event.

Many students are dismayed by the decision, and some are even signing a petition to boycott Rutgers Football games until they see it’s re-opening.

The alley was a safe and fun environment set up by the Athletics department for student organizations to tailgate before Rutgers football game. This tailgate lot also resulted in a larger turnout in the student section for football games, something that Rutgers struggled with for smaller games. Let Rutgers know that you will not be attending any football games until the Alley is reopened!

The Daily Targum noted they tried to reach out the Rutgers University Student Assembly, but they did not want to comment.

In the email, Rutgers Athletics writes, “Don’t forget to come to The Alley, the exclusive student-only tailgating lot, before the game! Parking pass pickup is Thursday at noon on the Brower steps. Click the image below to learn more.”

On August 31, Hobbs advocated for the alley, promising that “The Alley will be a fun, exciting place where students can get together on gameday.”

“There was a need to address the tailgating options for our students and we are excited to provide them with this opportunity,” the relatively-new athletic director said.

“Student involvement is a critical element to the energy in the stadium and we look forward to them bringing that passion on gameday.”