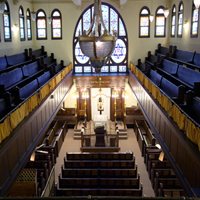 After 2015 Fire, Anshe Emethe is Only Active Synagogue in Hub City

NEW BRUNSWICK, NJ—The New Brunswick Historical Society's monthly meeting for March was on the topic of the city's historic synagogues.

Cohn is a longtime member of Anshe Emeth Memorial Temple in New Brunswick herself, and speaks fondly of the area's Jewish history.

"I'm attached to it," she says, "partly because my husband's family is here…the history of New Brunswick is partly his family's history in a way."

But New Brunswick's history also includes four other synagogues, including one that is now picking up the pieces after a fire nearly destroyed it last year.   Cohn's talk included great detail on the history of each.

In the 1950's, the synagogues were thriving.  All except for Anshe Emeth and Poile Zedek moved to Highland Park, which is where the Jews were moving.

Today, the identity at Anshe Emeth is "very much linked to New Brunswick."

The New Brunswick Historical Society hosts events like this once a month, and they are promoted on the City of New Brunswick's official website.