NEW BRUNSWICK, NJ—The Easton Avenue restaurant district may continue to grow if landlords Elie and Julian Khater take full advantage of his approval granted by the New Brunswick Zoning Board of Adjustment on December 21.

Khater secured variances to allow for 18 Condict Street, a house with a garage on the ground floor, to be replaced by a slightly larger building with two apartments and a ground-floor retail space, good for use as a store or a restaurant.

The property is sandwiched between two restaurants, Giovanelli's and inBoston, a new Korean chicken restaurant.

The applicant, through their attorney Peter Lanfrit, assured the Zoning Board that the restaurant would close no later than 2am.

A building has been on the site at least as far back as 1886.  In 1912 there was a cleaning and dyeing business on the property, according to fire insurance maps.

Even though it is located across the street from a new 15-story Boraie-developed mixed-use highrise, the new 18 Condict rise just three stories tall, and consist of a retail space with two apartments above.

Each apartment will have a legal occupancy of three persons.  Only the tenants in apartment #1 will be eligible for Fifth Ward on-street parking permits.

The existing 1,076-square-foot building was erected in 1904.  It is a two-and-a-half story house, with a garage on the ground floor and a two-bedroom apartment.  The existing attic is not habitable and there is no basement.

Both men have the same address in neighboring Somerset, the section of Franklin Township closest to New Brunswick, according to property records. 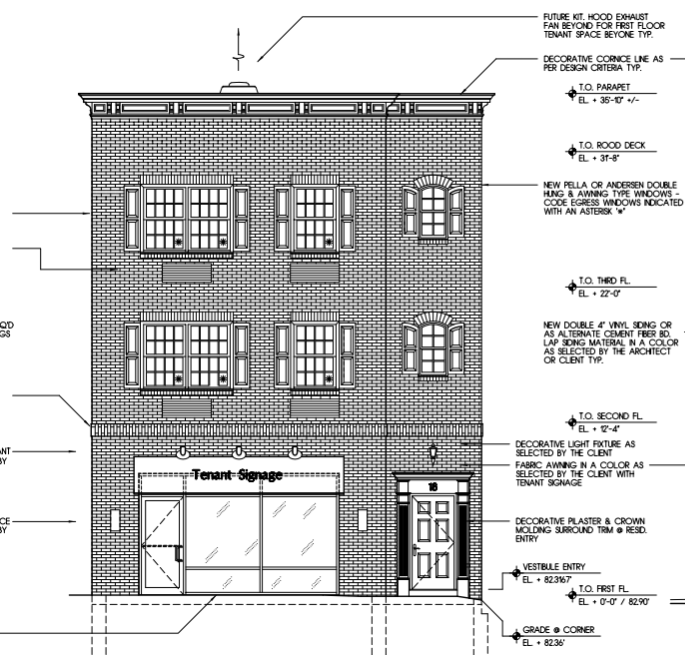 The front facade of the new building will be brick, like the existing garage, and the building's sides will be clad in vinyl or concrete fiber board.

The stairwell will have arched front windows and decorative shutters.  Apartment windows in front will be rectangular and have shutters as well.

The ground floor will contain 744 square feet of retail space. Garbage cans, recycling bins, and heating, ventilation, and air conditioning (HVAC) equipment will be in the backyard.

The staircase, on the right-hand side of the house, will be the new building's only stairwell, and will have hallways wrapping around the staircase and leading to each floor's entrance.

A new basement will be put in with a laundry room in the front and by the bottom of the steps.  The basement will also have four hot water heatersand a sump-pump to defend against flooding.

The boiler will be on the ground floor, along with gas meters. The new laundry room will be in front.

Like the present second floor, the 2nd and 3rd floors will both have two-bedroom apartments.

The roof will have a kitchen exhaust fan in the rear, a scuttle hatch, and a decorative cornice.

Because no garage is anticipated in the new construction, the driveway will be removed and replaced with a regular piece of sidewalk and curb.

The board also approved a subdivision that moves a small piece of the backyard at 64 Easton Avenue, also owned by the Khaters, from that property to the 18 Condict Street property.