UPDATE: After this article was published, Captain Miller confirmed that two people were injured in the crash and provided the following details:

On Tuesday, November 14, 2015 at approximately 1:34 pm New Brunswick police officers responded to a three vehicle motor vehicle accident near the intersection of Sandford Street and Remsen Avenue. The accident involved a 2009 black Dodge, a 2001 silver Dodge, and a 2014 yellow school bus. There were no children on the school bus at the time of the accident. The driver of the black Dodge (Rayna Cholula, 20 year old female from New Brunswick) was found to be at fault when she proceeded through a red light at that intersection. At the time of the incident she was issued a summons for Careless Driving. The driver of the silver Dodge and the school bus complained of pain and were transported to the hospital for treatment. No injuries were reported as life threatening.

NEW BRUNSWICK, NJ—A three-vehicle crash resulted in a schoolbus taking down a metal gate and damaging a monument at St. Mary’s Catholic Church at the corner of Remsen Avenue and Sanford Street on November 24.

The bus was marked as being from New Brunswick, but it’s not clear where the bus was or if any children were on it.

New Brunswick school district said that it was not one of their buses.

According to police radio transmissions, the crash occurred at approximately 1:30pm and injuries were reported.

Police said the bus was “clear” when they came upon the scene, but they had difficulty locating the driver.

Three vehicles, including the bus, were towed away from the scene.  Police eventually found the driver and called for an ambulance multiple times.

A police officer on-scene confirmed that everyone was “okay,” but a New Brunswick Police Department (NBPD) Captain declined to answer New Brunswick Today’s questions about injuries and charges resulting from the crash.

Asked for any injuries and charges stemming from the crash, NBPD Captain JT Miller punted.

“I am in receipt of your email, I will add it to my to do list, and get back to you as soon as practicle,” wrote Miller that same day. 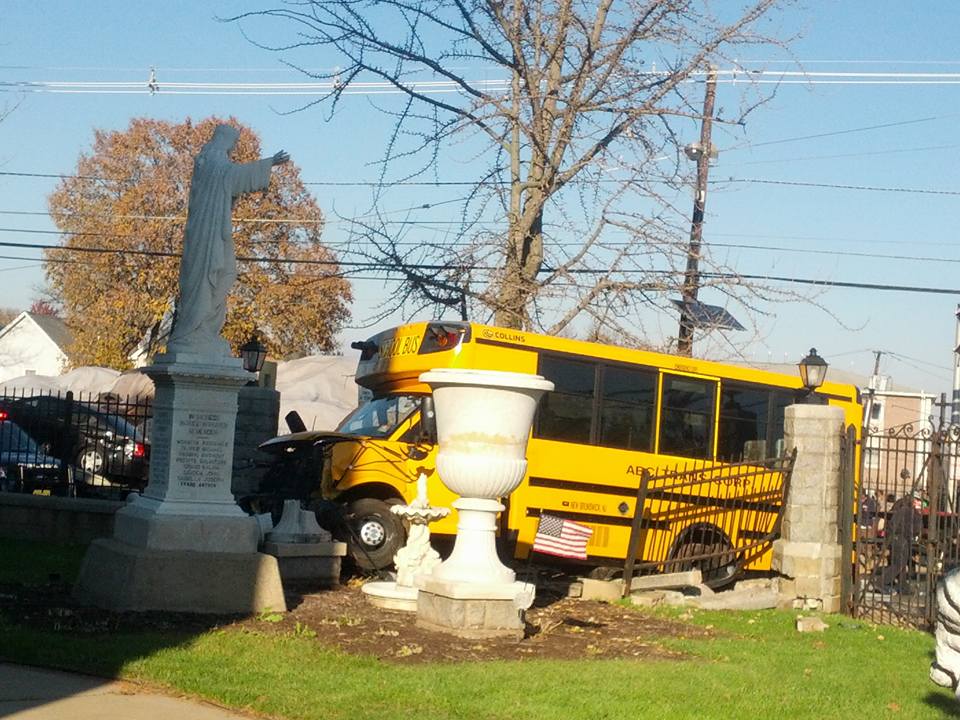 Almost a week later, Miller still has not indicated whether or not anyone was injured.

The bus company is based out of a New Brunswick post office box, according to public records.

A worker at the church said it was not the first time the property had sufferred damage from a motor vehicle crash.