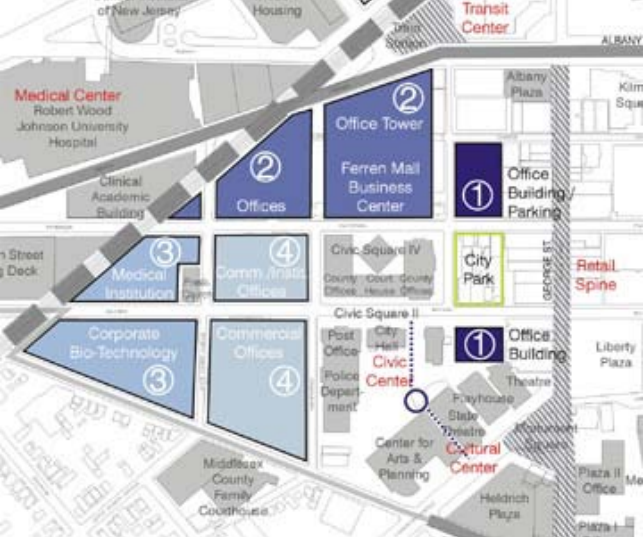 Notorious Developer Buys Another Piece of Downtown For $1.5 Million

According to property records, the prime piece of downtwon real estate includes two mixed-use buildings and 7-bedroom house are assessed at a value of $575,000.

The plot of land also includes some greenspace, and takes up a total of just .296 acres.  For years, the property had been owned by several trusts associated with the Mindel family.

It is located in the city's busy downtown government district, across from the Middlesex County Courthouse and TDBank, just a short distance from City Hall.

The buildings are currently home to a bail bonds business, a salon, a dress store, and the Legal Grounds coffee shop, as well as several residential units and a four-story office building.

As recently as 2006, Mayor James Cahill's "C.O.R.E. Vision Plan" called for the property to be turned into a city park, but his spokesperson says that plan has since changed.

"Create a public park with an outdoor performance space," reads an item on the city's 2006 plan, which was posted on the city website in 2014 as part of a larger presentation.

"It wasn't a solid plan, but a recommendation that a park may have gone in that spot," said Cahill spokesperson Jennifer Bradshaw.  "The plan for a park now involves the Wolfson [parking deck] location."

Boraie Development already owns two eight-story office buildings on Albany Street, and a number of nearby structures in the city's growing downtown.

Other Boraie-owned buildings include the spaces that are rented by the Harvest Moon brewery, Chipotle, Alfa Art Gallery, as well as One Spring Street, a 23-story highrise condominium complex that was the city's tallest building from 2006 until 2012.

The company also owns "The Aspire," a new 16-story luxury apartment complex on Somerset Street, and the Boraie family also owns 77 other rental units at at least 23 different addresses in New Brunswick alone.

Because of the company's penchant for building tall buildings, some fear that the Elm Row buildings days are numbered.

Sam Boraie, a Vice President at the family's development business, told New Brunswick Today that the company was planning to "rent it up," when the author of this article ran into him on Easton Avenue.

But Boraie walked away silently after we asked if the company plans to redevelop it in the future.

Sam Boraie did not respond to an email seeking further clarification.  His father, Omar Boraie, immigrated from Egypt in the 1970's and built the family business from a small city-based real estate company into a major redevelopment firm that is working in New Brunswick, Newark, and Atlantic City.

As we reported, the Boraie firm has secured numerous tax exemptions from the city, and a number of loans and grants from the state government, including a controversial $4.8 million in Hurricane Sandy relief funds.

The deed documents obtained by New Brunswick Today are dated between May 8 and May 15, and were filed with the County Clerk on May 28. With the exception the three properties owned by the Barrood family (including Court Tavern and Mike's Courtside) and one owned by Reynaldo and Maria Hincapie, the deal means Boraie now owns the entirety of Spring Street and Elm Row, three consecutive blocks between Albany and Bayard Street.

Tenants described the recent agreement to sell the buildings to Boraie, which include the addresses 5, 7, and 9 Elm Row and 51 Bayard Street, as a "fly by night" deal that left them in the dark.

Some of the remaining tenants in the buildings said that they received no communication from the family that previously owned the buildings, and only a short letter from someone claiming to be the new landlord.

Rumors swirled that the building could be earmarked for redevelopment, or rents could be increased.  Unlike residential properties, commercial offices are not subject to rent control laws.

Most of the non-descript office building at 5 Elm Row is vacant.  Boraie Development employees were seen on the third floor working on the building on June 23.