NEW BRUNSWICK, NJ—The commencement speaker for Rutgers University’s 2015 graduation ceremonies will not be made public until the school’s Board of Governors convene in Newark on April 2 to discuss the matter, officials said.

“You know I can’t tell you that,” said University President Robert Barchi, when asked about the 2015 speaker by New Brunswick Today.

Last year, the selection of former US Secretary of State Condoleezza Rice as the school’s 248th commencement speaker was announced and voted on at the February 4 Board of Governors meeting, giving ample time for opposition to organize.

Rumors have been spreading for several weeks that television personality and scientist Bill Nye, “the Science Guy,” would be the 2015 speaker.

Nye produced educational videos for schools and public television during the 1990’s and early 2000’s.  He is an advocate on the issue of climate change, and known for wearing bow ties.

A Facebook campaign, known as the “Bow Tie Campaign,” was launched by two graduating seniors, calling for Nye to be the speaker and for commencement attendees to wear bow ties. The selection of Condoleezza Rice as last year’s graduation speaker sparked a ten-week battle over the decision that resulted in her backing out of the job, which included an honorary degree and $35,000 honorarium.

“Condoleezza Rice…played a prominent role in the administration’s efforts to mislead the American people about the presence of weapons of mass destruction,” the resolution read.

Ultimately, the resolution stated that such a degree “should not honor someone who participated in a political effort to cirgumnavigate the law”.

Opinions pieces flooded Targum for the next several weeks. The administration would hold steadfast to their decision, with Rutgers President Robert Barchi and Senior Director of Media Relations Greg Trevor defending Rice’s selection.

Protests against Condoleezza Rice reached their apex with a storming and an occupation of the school’s oldest building, the Old Queens administrative offices, on April 28.

Five days later, Rice backed out of the offer, though the administration still stood be their selection of Rice.  A “Rice at Rutgers” teach-in was held at the Student Activities Center on May 6. As the debate over Rice’s selection became the focus of intense scrutiny, questions were also raised as to how exactly she was chosen as the commencement speaker.

The scandal in March and April of that year involving basketball coach Mike Rice, and his abusive behavior towards members of the team, may have influenced Rice’s initial decision.

“Given recent events I think we should hold off on sending [the speaker offer letter] for a while,” wrote University Secretary Leslie Fehrenbach on April 4, 2013, just as the scandal was making national news.

The emails also revealed that Greg Brown, Chair of the Board of Governors and CEO of Motorola Corporation, “is good friends with” Rice.

Board Secretary Leslie Fehrenbach wrote that only two of the Board of Governors members were involved in Rice’s selection: Greg Brown and Margaret Derrick.

“Our speaker is Condoleezza Rice! But please don’t tell anyone,” wrote Fehrenbach in the November 5, 2013 email to Derrick.  “We won’t release her name until February or April.” 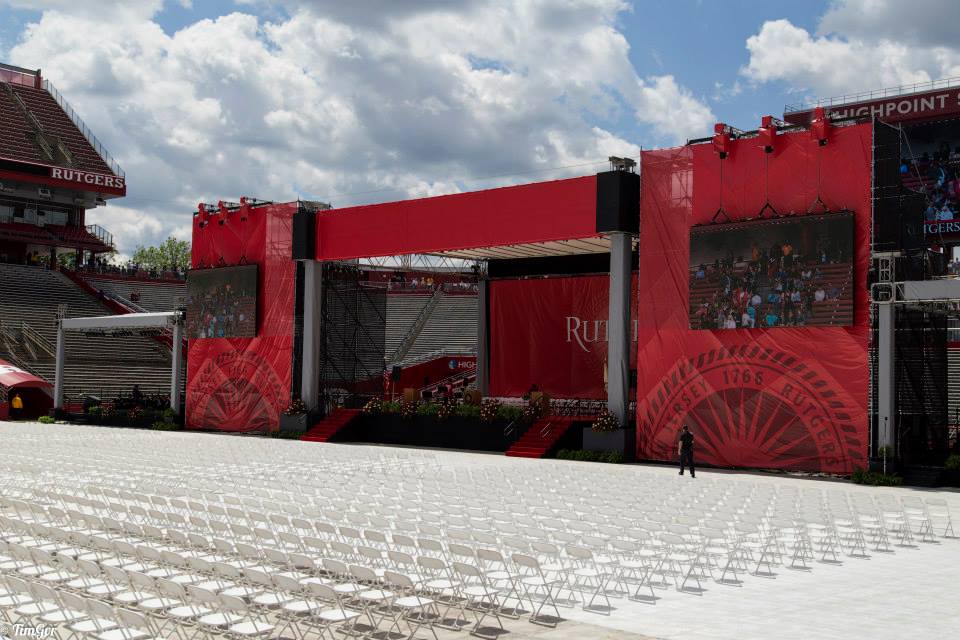 In that same month, the University Senate announced that it formed committee to handle the speaker selection process, and that it would, according to Senate Chair Ann Gould, “consist of faculty, administrators, student leaders, staff and alumni, and the executive secretary of the senate.”

“Until 2012, a Faculty Committee on Honorary Degrees, which included representatives from all three campuses appointed by the president, was tasked to solicit nominations for the honorary degree recipients and commencement speaker about 18 months in advance of commencement, and then to confidentially prepare a slate of candidates”, the report reads.

Many opponents of Rice’s selection felt that the decision to vote on and announce the commencement speaker so late in the year, and to hold vote outside New Brunswick, was by no means an accident.

“Blatantly hiding the decision until April is ridiculous and unheard of,” wrote Amani Al-Khatahtbeh, who had been active in the leadership against Condoleezza Rice.

“The administration is completely disconnected from the student body and provides no outlets for students to voice their concerns — actually doing everything it can to ignore them.”

“There is consensus on democratization. To President Barchi: why nothing has changed?