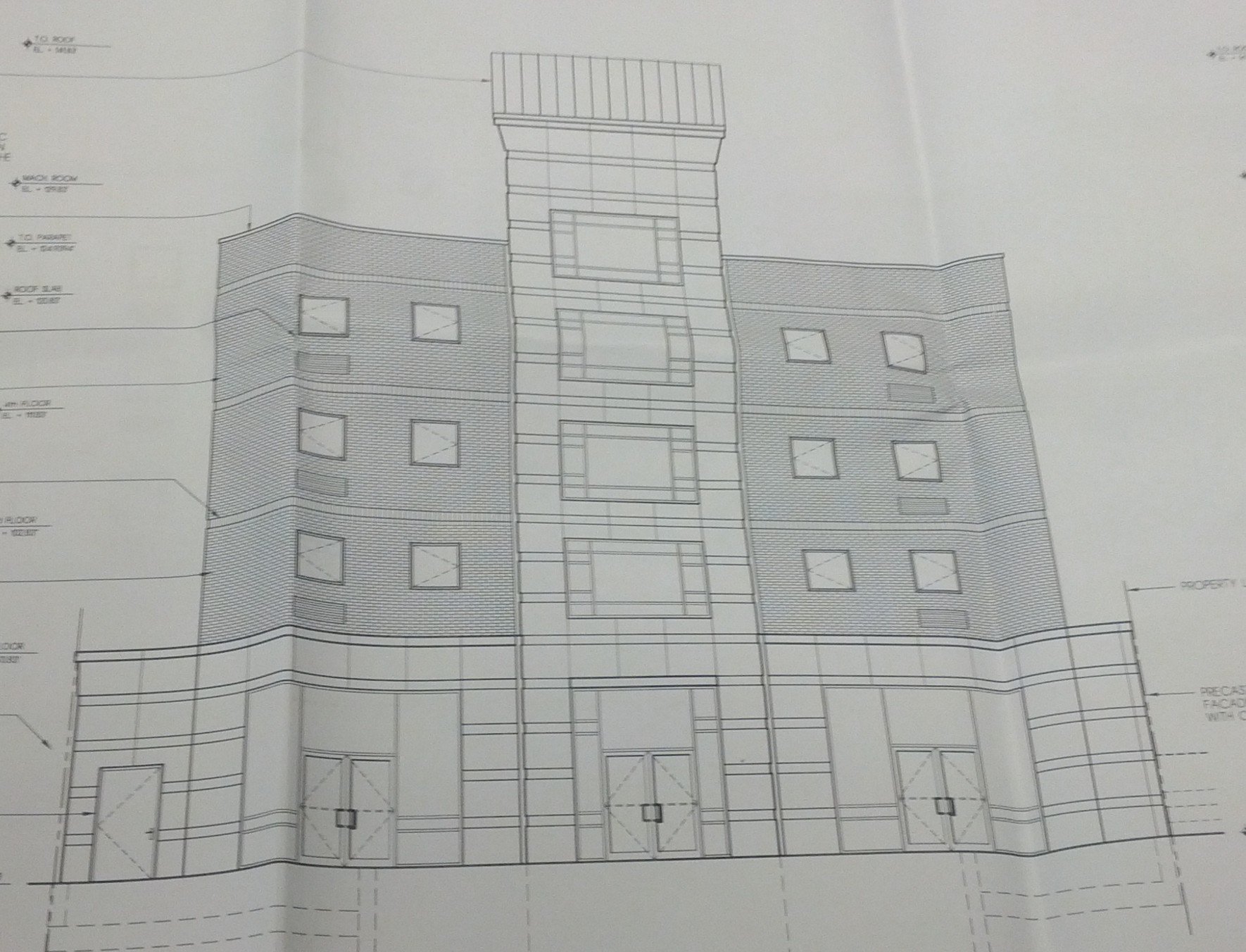 NEW BRUNSWICK, NJ—Plans for a new four-story apartment building on a lively block of Easton Avenue was approved unanimously by the city's Planning Board on February 26.

The structure would replace two-story mixed-use buildings that housed popular businesses before they were destroyed by a four-alarm inferno on March 3, 2004.

Three years after the fire, David Abisleiman, of the family that runs Evelyn's Lebanese restaurant at 45 Easton Avenue, bought the property for a dollar from other family members.

The new plans call for 18 apartments above two retail storefronts.  There will be a total of 43 bedrooms: 9 three-bedroom apartments, 6 two-bedrooms, and 3 one-bedroom dwellings.

Like many older structures in the city, and some newer ones, it includes no on-site parking. The city's zoning ordinance requires 59.3 spaces for building visitors and residents, but the Planning Board approved the requested parking variance.

The project needed to come before the Planning Board because four variances: loading, parking, building height, and accessory structure height.

The property owner had scaled back plans to build a six-story building at the site.  Instead, the four-story building will feature a sloped top flowing from the elevator shaft, which sticks out above the top floor.

The retail spaces, with 1,922 square feet and 3,670 square feet of space, will take up most of the ground floor. Each will have two restrooms and a closet, and they will share a common garbage room in the rear of the building.

Judging from nearby businesses, the retail areas might be destined to become restaurants, eateries, university-oriented shops, barber shops, or convenience stores.

For years, the site was home to the coffee shop Cafe 52, which boasted of "a vertical chessboard" and "delicious desserts," and an Italian restaurant, Teresa's Ristorante.

The new project would have one elevator and no parking spaces.  Each of the three residential floors will contain six apartments: three with three bedrooms, two with two bedrooms, and a lone one-bedroom apartment.

On each floor, there will be an elevator lobby, two stairwells, access to garbage chutes, and a laundry room with a bicycle rack.  The chutes will lead to a residential garbage room in the basement.

Each apartment will have a bathroom with toilet, sink, and shower, a water heater, a "great room" for eating, meeting, and lounging, as well as kitchen facilities, and at least two closets.

Both retail spaces will have access to their own storage rooms in the basement. The cellar will also have water utilities, gas pipes, electrical utilities, and a water meter/sprinkler pipe room.

The one-bedroom apartments will be located in the back of the building, on the southern corner, facing a new 16-story skyscraper known as The Aspire.  They will have a kitchenette within their 211-square-foot great rooms, but the other apartments will all have separate kitchens.

One-bedroom apartments will be the smallest, with 341 square feet of furnishable space.

The two-bedroom apartments will occupy the Somerset Street-facing centers of the building and the Condict Street-facing rear corners, with 494 and 576 square feet of space respectively.

Three-bedroom apartments will be in the front and south-central areas, with furnishable areas ranging from 628 square feet to 723 square feet.

For several years, the property had been tied up in litigation between the Abisleiman family and the city-based company Boraie Development, which built a neighboring skyscraper that was heavily subsidized by government loans and federal Hurricane Sandy relief money.

The crane that built the 17-story highrise was parked in a former New Brunswick Parking Authority lot, that once had 18 spaces, and provided an access easement to the Abisleimans' property where the four-story building is now proposed.

Unfortunately for the Abisleimans, when the Boraie Company gained the Parking Authority lot, a move some said was to ensure the property was connected to Easton Avenue, and therefore in the city's Urban Enterprise Zone (UEZ).

The Boraie project intended a pedestrian walkway to replace the old New Brunswick Parking Authority lot, which would make it impossible to get to the rear of the Abisleiman property by vehicle and render the easement useless.

The walkway still has not been constructed. 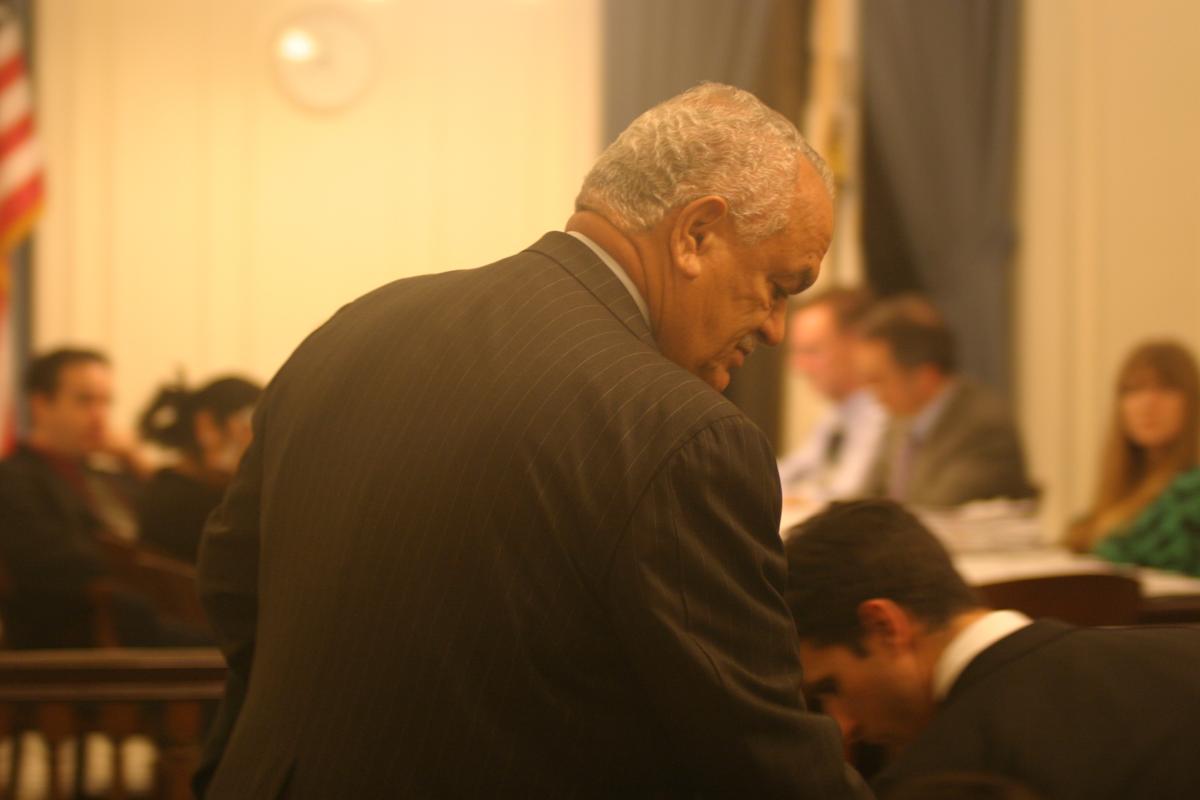 The Abisleimans claimed that Boraie's application to build the Somerset Mews was invalid, and that it had improperly been handled by the Planning Board, rather than the city's Zoning Board of Adjustment.

The case was settled in late 2014, but not before the Boraie Company's lawyer, Thomas F. Kelso, argued before the planning board that the Abisleimans would not be able to proceed with their building, no matter what the lawsuit's results were.

For the first time in a while, the county government attorney who frequently represents the city's biggest developers found himself arguing against an application for development moving forward speedily.

The board, and its attorney Benjamin Bucca, agreed with Kelso, forcing the Abisleimans to wait several more months before finally getting the hearing to move forward.

The Abisleimans intended to use that easement to help with the construction of their 50 Easton Avenue project.