NEW BRUNSWICK, NJ—As the city’s Water Utility works to restore its reputation after a costly coverup, changes being implemented are also proving to be costly, and that cost is now being passed on to businesses and residents in the city, as well as Milltown and Franklin.

After being charged with filing falsified reports to cover up situations where people should have been alerted to boil their tap water on seven occasions, the city borrowed more than $6 million, and put the Water Utility under a controversial privatization agreement.

As of January 1, water and sewer rates including the “minimum quarterly charge” for both services were increased by 5%, a rate hike that is scheduled to repeat itself in 2016 and 2017.  By comparison, water rates went up 2%, 3%, and 4% in the previous three-year period.

Two days earlier, the ordinances to raise them were approved before a sparse crowd at the Council’s December 30 meeting.

The average family of four currently pays $190 per quarter, or $760 annually, for water and sewer services, according to officials.

According to a spokesperson for Mayor James Cahill, the privatization deal is among the factors responsible for the increase in rates.

“The reasons for the increase include a number of things, including the costs of the chemicals and energy needed for daily operations at the plant, the ongoing large scale improvements that are underway, the American Water contract, the cost of raw water, the City’s existing debt service and personnel costs, including pension and health benefits,” said Jennifer Bradshaw, the Cahill spokesperson. 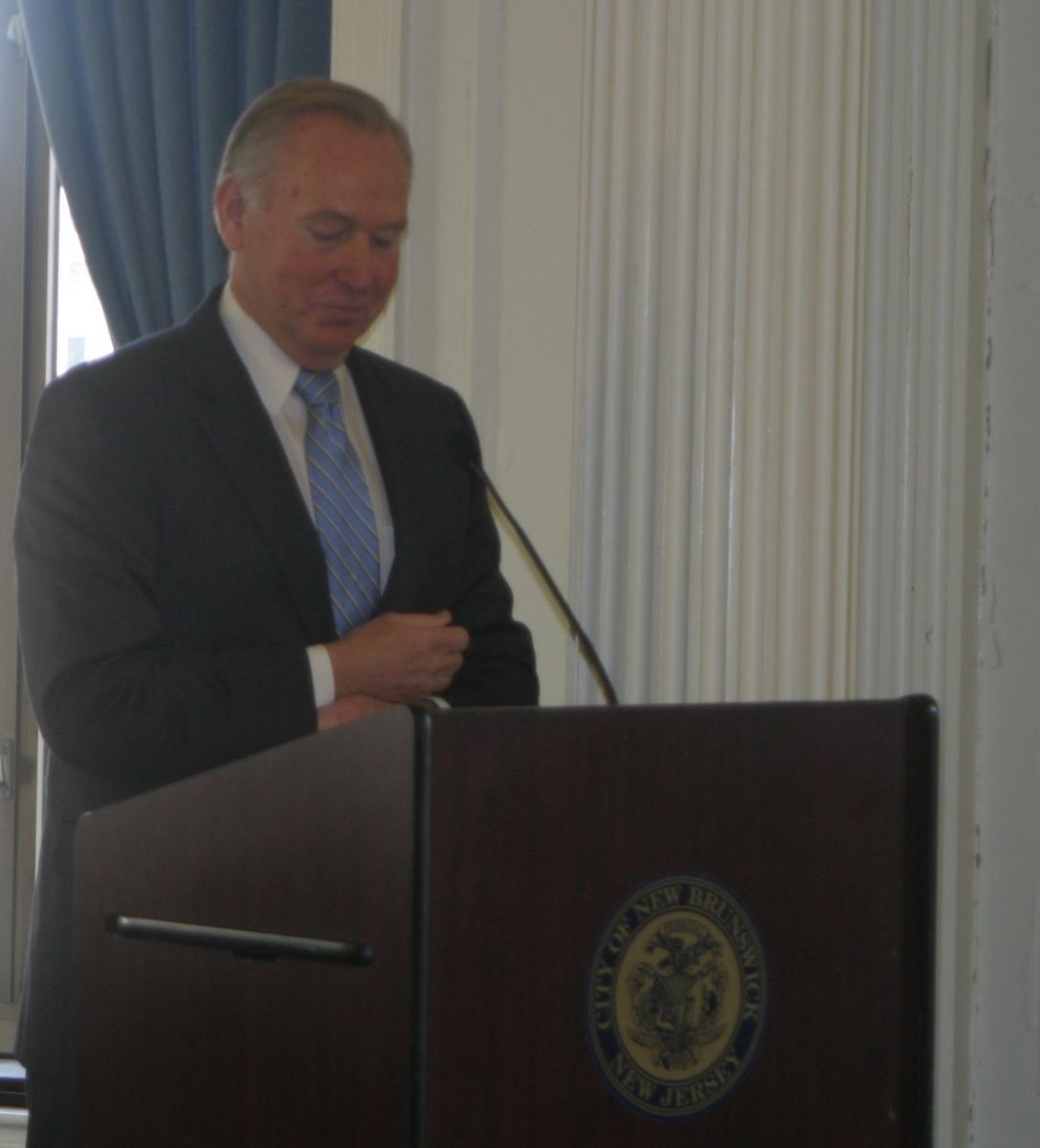 In his recent “State of the City” address speech, Cahill did not mention the cover-up, the privatization agreement, or the rate hike, but he did acknowledge the city’s continued investments in the utility’s infrastructure.

“The New Brunswick Water Utility will continue its large-scale renovation project to further increase reliability and efficiency of our water system,” Cahill said in the January 2 speech.

“These upgrades will improve the efficiency of our systems and allow for the continued production of high quality drinking water for our residents,” Cahill said.

“We expect some cost increases in our debt services. We’ve done some significant borrowing for capital improvement projects recently,” said Loughlin.  “We expect increases in chemicals and energy. We expect a slight increase form the Water Supply Authority for the cost of raw water”

“This I would certainly agree was not a routine year, 2014,” said Loughlin, who ran the troubled agency for over five years, when the cover-ups reportedly first occurred.

Indeed, 2014 saw the fallout from the coverup, the departure of Water Director Frank Marascia, Mayor James Cahill’s takeover of the utility, and the controversial deal to hand over some aspects of the utility to a private water company, as well as the hiring of new Water Director Alexei Walus, who was approved by a City Council who had never spoken to him.

Loughlin has thus far escaped any official punishment or blame in the coverup that happened on his watch. A different city employee who ran the water treatment plant for decades still faces a license suspension, a fine, and perhaps criminal charges in the coverup which became public in November 2013.

While the city borrowed millions to fix up its aging Water Treatment Plant and pumping stations earlier this year, its Water Director was preparing to jump ship and take a job with the same private company that would later be put in charge. 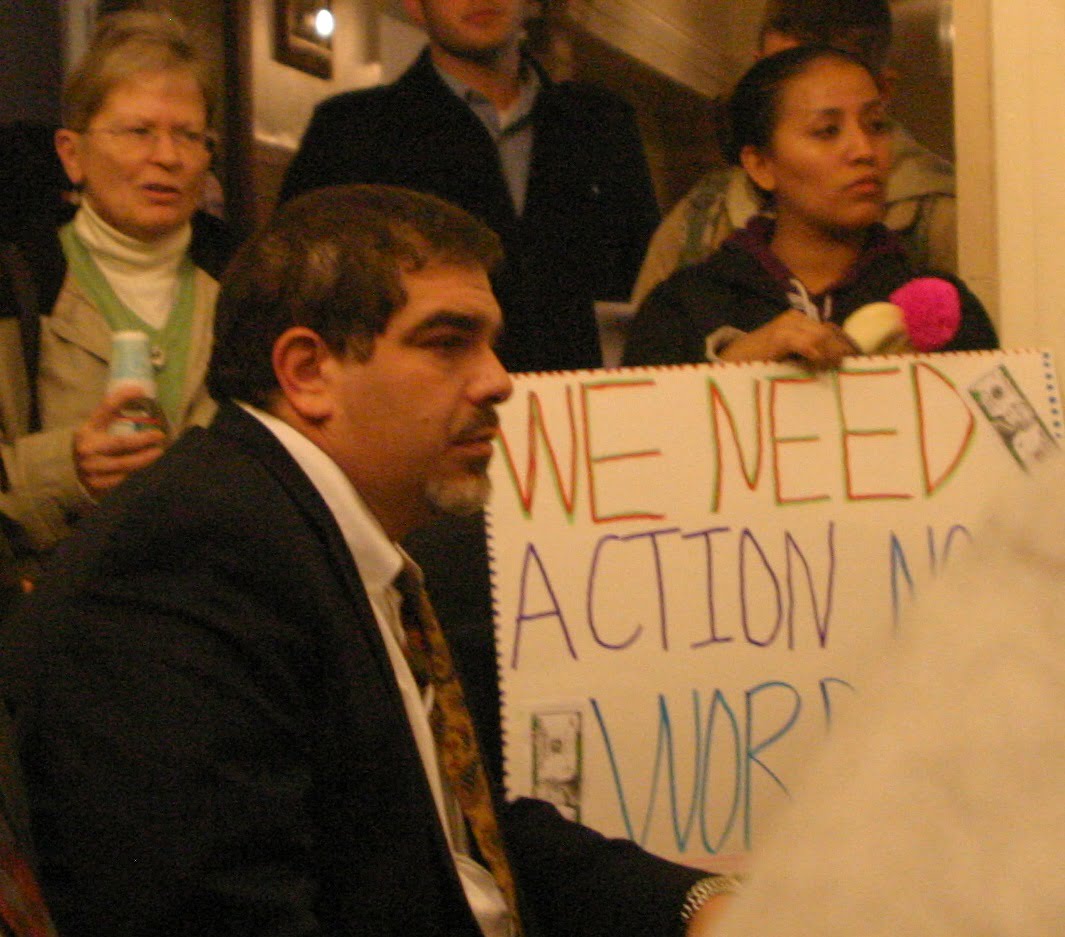 The depature of Director Frank Marascia led to a secretive and successful effort by Mayor James Cahill to privatize some of the utility’s functions in a deal that could cost taxpayers more than $868,000 over 12 months.

Marascia’s departure was quickly followed by Keith Smith, who left the position after just six months in the job, leaving the embattled agency without a licensed operator.

Mayor Cahill took control of the utility in July and swiftly signed a temporary contract with NJ American Water, which was in effect long after its 45-day timeframe expired.  Council members and the public were not notified of the deal until after it had been signed.

At first, city officials talked of a 2-3 year deal with AmericanWater, then a 1-2 year deal, and eventually a one-year deal that they would work to terminate for good at its conclusion.

In September, allegedly under pressure from the state Department of Environmental Protection to act, the Council voted unanimously to approve the $868,000 deal with the Voorhees-based company.

The deal’s opponents were somewhat successful in minimizing the privatization effort, but many were denied the right to speak during a public hearing when the City Council ratified the initial 45-day privatization agreement in July.

At the time, activists and other opponents of a privatization deal said it would increase the cost of water to the city’s tens of thousands of customers in the long run.

Opponents of the deal, who had said it would soon prove to be an unnecessary expense once the city hired a qualified Water Director, were also proven right when Alexei Walus took over for Cahill as the Water Director. 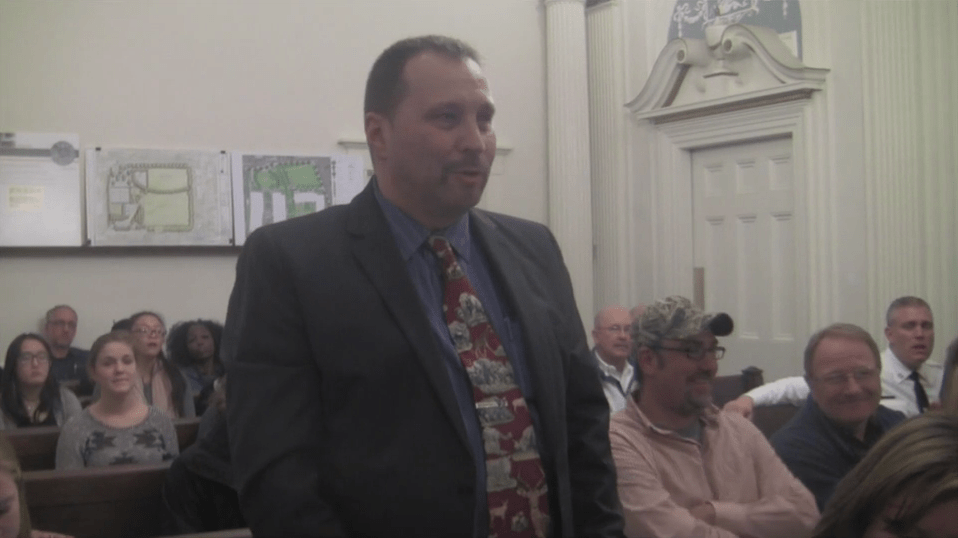 Walus meets the requirements to operate the treatment plant, but American Water employees continue to fill the role at the expense of the taxpayers.

On just his third day in the job, he went to his first City Council meeting, where City Council members approved a $3.3 million contract with Parlin-based Allied Construction Group.

“I’d like to thank the city for the opporutunity. I’m really excited by the opportunity that you’ve given me. I’ve been in this industry for 28 years… while I was going to college I started in it and I started off as a meter reader and a hydrant painter and now it’s Director, so thank you,” Walus said.

The Council also approved the shifting of more than $300,000 to pay bills from NJ American Water, which has been working for the city since July 7, just days after Marascia departed the city job.

The millions to be spent upgrading the water treatment and distribution system will come largely from the residents and businesses based in New Brunswick, Milltown, and parts of Franklin Township, when they pay their quarterly water bills.

Officials confirmed the rate hike would also apply to government and non-profit insitutions including Rutgers University and the city’s two major hospitals.

“We studied the rates of 30 different municipal systems in the state and we came in at second-lowest out of the 30,” said Loughlin.

Jim Walsh of Food & Water Watch, an organization that fought the privatization said, “New Brunswick, and communities across the state need investment in the public drinking water systems.”

“It is too bad that a private water company is able to syphon off money from these rate increases that world be better spent on pipes than profits. New Brunswick residents will be better off when the City ends the contract.”

Loughlin confirmed the city was trying limit the scope of the deal to the best of its abilities.

“We get credits every month for positions that they don’t fill. We’ve asked them not to fill them, they’re not necessary…. And ,yes, we’re having ongoing conversations about reducing the value of the monthly contract even further.”

“There will be an American Water presence in 2015… I have nothing to report yet, but there’s some active conversation going on about restructuring the contract.”

Two city residents, including the author of this article, opposed both the ordinances and suggested the Council only approve one year of rate increases and wait to decide on 2016 and 2017.

“The 2015 water budget is not ready for indroduction yet,” responded Loughlin.  “We’ve done some projections and we think the rate increases we are proposing will cover our expenses.”

“Our projections for the rates are based on what we think our expenses will be in 2015 and beyond,” said Loughlin.

The $3.3 million will go to a new project to add generators to the city’s aging pumping stations, and replace  total of five pumps and motors at two locations.

The city’s customers drink treated water that is pumped from either the Delaware & Raritan Canal near Buccleuch Park, or the Weston’s Mill pond near the border with East Brunswick.

In a strange twist, council members were given details about the project, shortly after they had voted unanimously for it, in much the same fashion they approved Walus’ appointment three weeks before meeting him for the first time.

“You’ve just acted on the award of a contract… to modernize both raw water pump stations,” said Loughlin, who ran the Water Utility for five years, including much of the time when falsified records were being sent to the state.

On the sewer side of the budget, Loughlin said he would typically refer those questions to City Engineer Tom Guldin, who was not present.

“We do INI investiagtions all the time, we televise the condition of the sewer piper in this town,” said Loughlin. “We have been asked to deal with the flooding problem at Charles Street.”

Loughlin also said other reasons for the increase included efforts to modernize “all of the sanitary sewer pump stations,” and predictable increases in costs passed on to the city from the Middlesex County Utilties Authority.

“Their costs do not go down,” Loughlin said.