NEW BRUNSWICK, NJ—The Hub City has a rich underground arts and culture  scene, and is well known for hosting many concerts in the basements of local residents’ homes.

The locations are known by the attendees as a “show house” and generally have codenames to keep the actual locations a secret, creating a speakeasy vibe that requires one to be in the know to actually attend an event.

But, in recent years, New Brunswick’s underground music scene has inspired others to create similar spaces to facilitate the enjoyment of visual art, poetry, and even standup comedy.

Earlier this year, two Rutgers alumni began hosting their own showcase for local comedy that has quickly developed a following.

The Tabernacle Comedy Show was created by the comedy duo Marlon and Pip.

Based on their appearance, the two comedians could not be more different.

Marlon is a tall dark haired guy with a high energy act.  He uses a blend of physical comedy with absurdist premises to keep the audience entertained.

Pip is shorter, more slight, and a red head.  His approach to comedy is more reserved.  He tends to stand in one location while drawing the crowd in with observational material.

But their showcase features a blend of an “open mic” performances for amateur comics and feature spots for select veteran comedians.

The duo host the event every two weeks in varying locations and are already planning their seventh show.

Everything about the Tabernacle is put together by Marlon Dunn and Pip Pluto.  They provide the mic, lighting, amp, venues, and even made the very benches the comedy fans sit on.

The duo says they do it to provide an encouraging space for comics to hone their acts.

“I spent four years in college going to basement shows and they were all for bands and poets. There just wasn’t anything for comics,” Pluto explained. 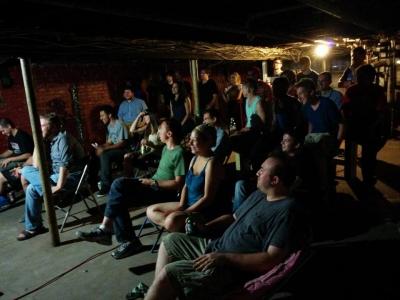 Before the Tabernacle Show, comics had to go to established venues such as the Stress Factory, or try to set up open mics in coffee houses, art galleries, and bars.

“The show regularly draws crowds of thirty or more people. Most are Rutgers students and its great to see local art being supported this strongly,” Pluto stated.

“It’s a learning environment first and foremost. We provide comics with a good crowd and a free show. Basically we’re trying to encourage people to be more comfortable doing stand up.”

Their strategy appears to be working as each show seems like an evolution from the last, with more veteran comedians making their way to the venue.

The Tabernacle operates like a speakeasy, but some of the local comics know the secret. The next event will feature great local talent and the feature sets from Dina Hashem and Joe McAndrew.