NEW BRUNSWICK, NJ–New Brunswick artist Sam Romero isn’t one to mince words. A quick survey of his art makes it clear that he aims to reveal the truth and isn’t scared to rub people the wrong way while speaking his mind.

His political cartoons are direct, taking aim at local and national politics with equal enthusiasm, while broaching a wide variety of subjects, including immigration reform, public policy, urban planning, education and race politics.

Romero is a self-proclaimed freedom-fighter, a local activist working heavily in election campaigns, while supporting all types of student and social activism.

As a professional artist, Romero supports himself with his skills, but never hesitates to provide affordable, or even free, work to the progressive causes he believes in.

Romero practices what he preaches, and although possibly antagonistic at times, he definitely raises important issues and asks important questions.

Sam Romero aims to speak the truth and reveal what’s really going on in this city. 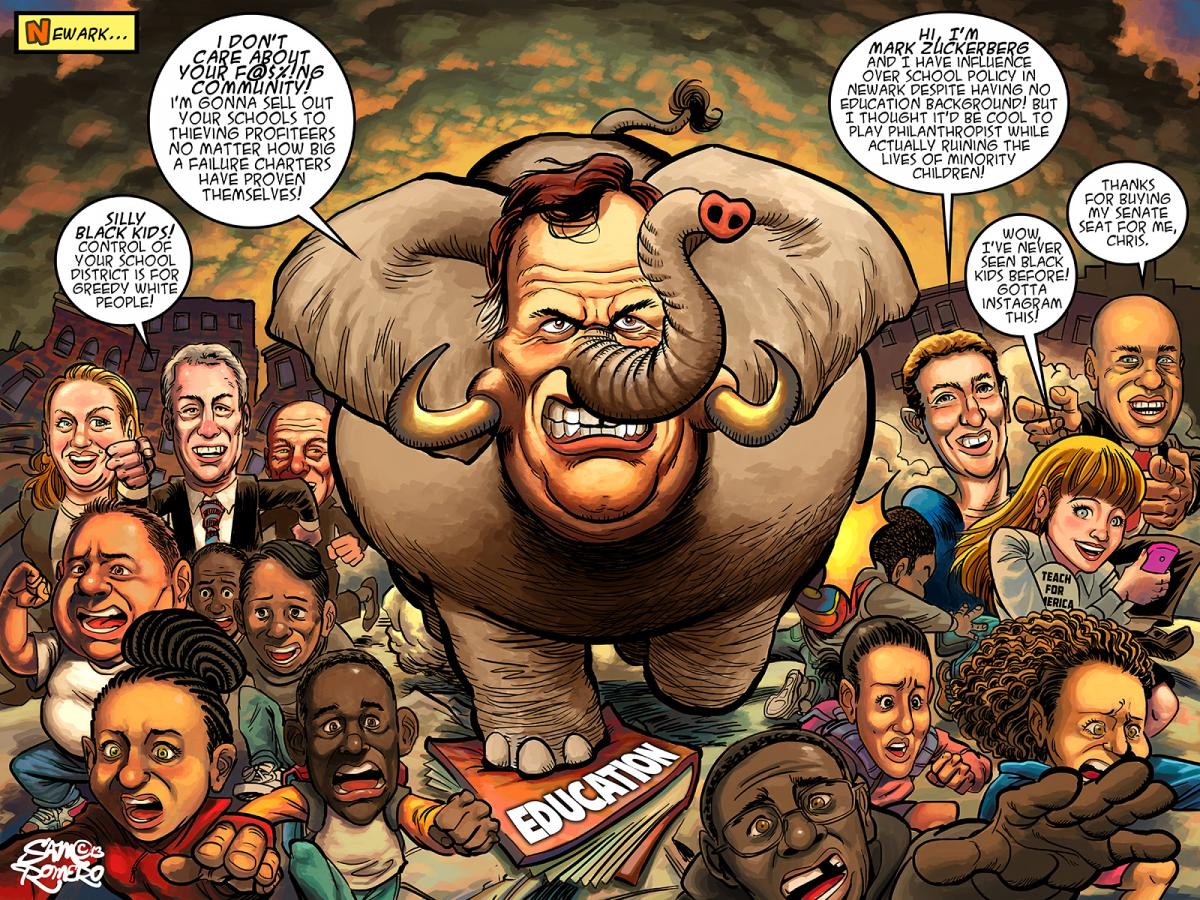 GROWING UP IN HUB CITY
Romero is New Brunswick born and raised. He lived in the “projects” and he went through the New Brunswick public school system.

“I grew up extremely poor in a single-parent family, the child of a legal Peruvian immigrant, “ Romero told New Brunswick Today.

“My mother and I lived as drifters for a very long time in New Brunswick’s former inner city while Reagan and Clinton waged the War on Drugs,” which Romero described as “essentially a war on the ethnic poor.”

These Hub City experiences fuel his art, as well as his strong skepticism about the benefits of recent redevelopment efforts for less affluent city residents.

Romero emphasized that, “Living much of my life as a marginalized, displaced person under a segregated economic system skewed me toward the idea that it’s the job of a community to look out for the well-being and improvement of the people who live in it.”

Although Romero believes that every member of a community maintains a responsibility to it, he said that “an artist has a specific responsibility that’s not often recognized, even by artists themselves, which is to reflect, shape, and guide the values of [his or her] community.”

RESPONSIBILITY OF AN ARTIST 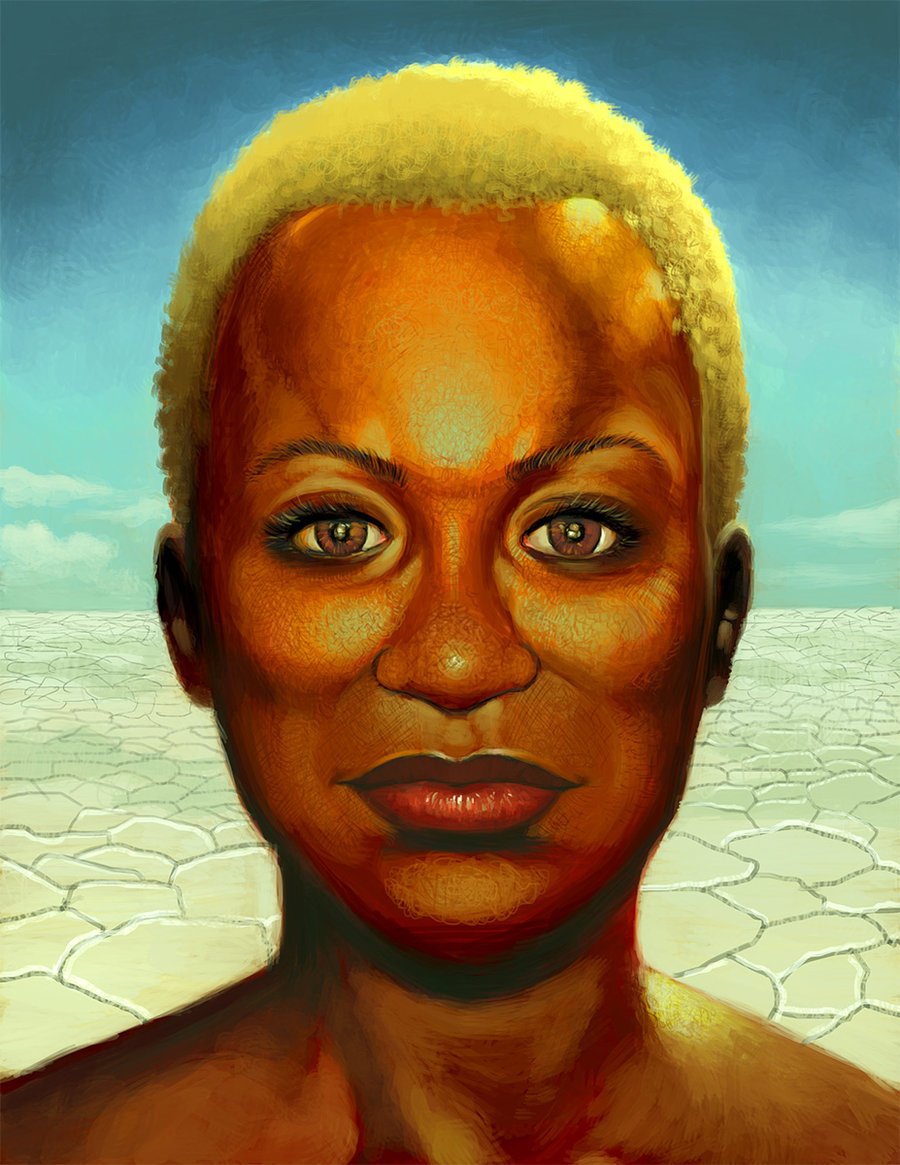 Art is a useful tool to interpret the world and change perspectives, so Romero believes that artists should wield its power responsibly.

Romero noted that art “immediately lowers the public’s guard and engages their thoughts and emotions en masse,” so the main role of an artist is to “move people to think.”

He believes works in any medium can be “invaluable tools in developing peoples’ inner lives and consciousness.”

But Romero doesn’t insist that every artist be socially conscious.

“I wouldn’t say [social consciousness] is a necessary component,” he added, “it is possible to appreciate aesthetics or concepts by themselves. Art is a collective act where you have colleagues, and a diverse audience to consider.”

And some of his goals are not so different from what is demanded of an art school student.

He attended both the Pratt Institute and the Mason Gross School of the Arts, so he believes that he is familiar with the dictates of the modern art world, but feels a need to reject what he perceives to be conformist attitudes imposed by reactionary institutions.

Romero said that art schools “cater to very specific niches: people interested in the ‘art world,’ or the commercial arts,” and added, “And that’s fine if you want to do that. But I wanted to do cartoons and comics.”

Romero disagrees with what he thinks are mandates of the powers that be in the art world and explained that he “struggle[s] against the mainstream establishment of art as a mindless exercise stripped of any meaningful narrative.”

Romero holds views that differ from those of other contemporary artists or critics, believing that “art schools generally discourage narratives,” so he “rejected the postmodern anti-dialectic as any sane person should.”

“I CHOSE ART IN A WEAPONIZED FORM”
Romero is on the side of the people and supports efforts to change the system, but while many students embrace catchphrases about “fighting the system” or “fighting the power,” Romero refuses to use the word “fight” to describe his pursuit.

He prefers to describe his approach as a “struggle” or “resistance.”

Romero explained, “The word “fight” connotes violence and implies a parity between conflicting forces that usually doesn’t exist. To struggle or resist is to describe a conflict from the perspective of the disadvantaged party. You struggle against or resist a dominant force, and that takes on a variety of forms. I chose art in a weaponized form.”

Although Romero doesn’t use the word “fight” because of  his opinions regarding the connotations, the conceptualization as art as a weapon prevails in his work . He even coined the term “Romerian” to describe his “narrative construct.”

Romero explained that his art is “conquering new lands and leaving [his] mark, like an empire,” though he acknowledges the irony in that he is far from a formidable force, joking that he “can barely scratch enough beer money on the weekends!” 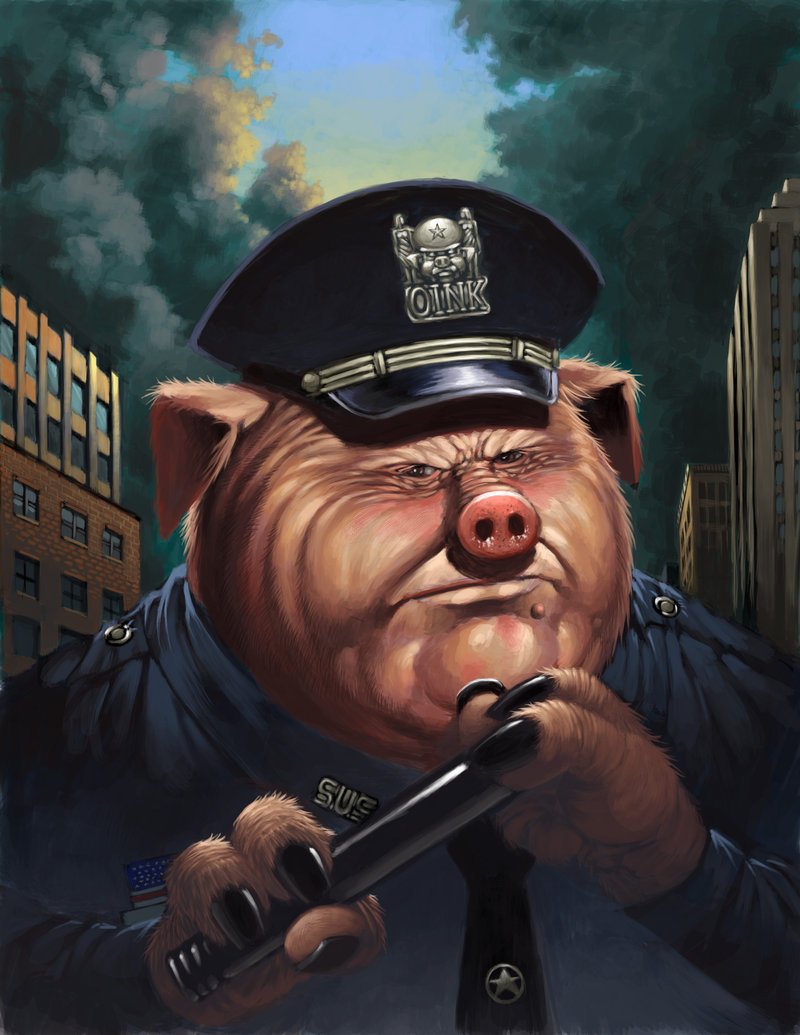 “I’ve accomplished quite a lot on my own, and survived and succeeded where many of my peers didn’t, but I’m not obtuse and egocentric enough to believe I did it alone or that I have the right to look down on people who failed where I didn’t,” Romero told New Brunswick Today.

Romero contends that the government maintains a responsibility to help its residents succeed and is “a firm believer in state institutions under popular control taking a very active role in mitigating social conditions that take horrible tolls physically and psychologically on marginalized peoples.”

Through his experiences in electoral campaigns “against the incumbent administration” he claimed that ”nothing ever took root due to the extent of patronage, corruption, and overall disengagement of the city’s residents.”

In New Brunswick, Romero would like to see “a mass, diverse democratic movement” to combat these problems.

“This city’s true potential can only be fully realized if its residents organize to take power and reclaim their freedom from the public and private entities imposing their master plan of a sterile, corporate-approved anti-city.”

Romero said, “The city has more white people in it than before. Downtown is a lot more yuppie and hipster-friendly than it was ten years ago.”

Romero doesn’t see redevelopment efforts as inherently evil, but he is skeptical of developers who claim to the interests of the long-time residents in mind. He believes these new developments are meant to please a small number of higher-income residents.

“Redevelopment is a problem when much of the major city investment is skewed towards developers and businesses that cater to specific demographics while the social needs of the people who call this city home are neglected,” Romero said.

Romero is upset by the lack of attention paid to “hardworking people who can’t afford “condos, luxury rentals, pretentious wine stores, or a night at a fancy bar.”

Even more troubling to Romero is that these new buildings are in the same physical places occupied by establishments that once catered to the lower or middle classes which populated downtown New Brunswick.

“This uneven distribution of investment is made worse by the fact that it is all built on the graveyards of many poor neighborhoods and local businesses that were forced out of existence by the municipality,” he said.

“I remember when George St. was dotted up and down with many homegrown businesses and had decent community spaces,” Romero added, “It has all disappeared mostly, and it’s all by design.”

Romero’s criticisms aren’t limited to downtown New Brunswick, he also has a lot to say about the role of Rutgers in ths city. “Rutgers hasn’t served much of a role in the community beyond employing people and as a brand for the city.”

Romero maintains some optimism because of Rutgers’ students penchant for activism and his “hope lies with the students.” He lauds the opportunities the Rutgers community provides as a platform for student activism.

Romero said, “Rutgers has a wonderful, proud, and strong tradition of student activism” and added “You can entertain wild ideas, plot all kinds of constructive mischief, and combat the bad things in this world with minor repercussions.”

“Organizing your community, directly challenging your local power structure, engaging with people from different backgrounds and values, and going outside your assigned role is a helluva kick.”

Romero also described the art scene in New Brunswick as rife with problems, “New Brunswick has the same problem as the rest of the social scene. Its growth is stunted by repression and disinvestment from the city.”

CHANGING SOCIETY FOR THE BETTER 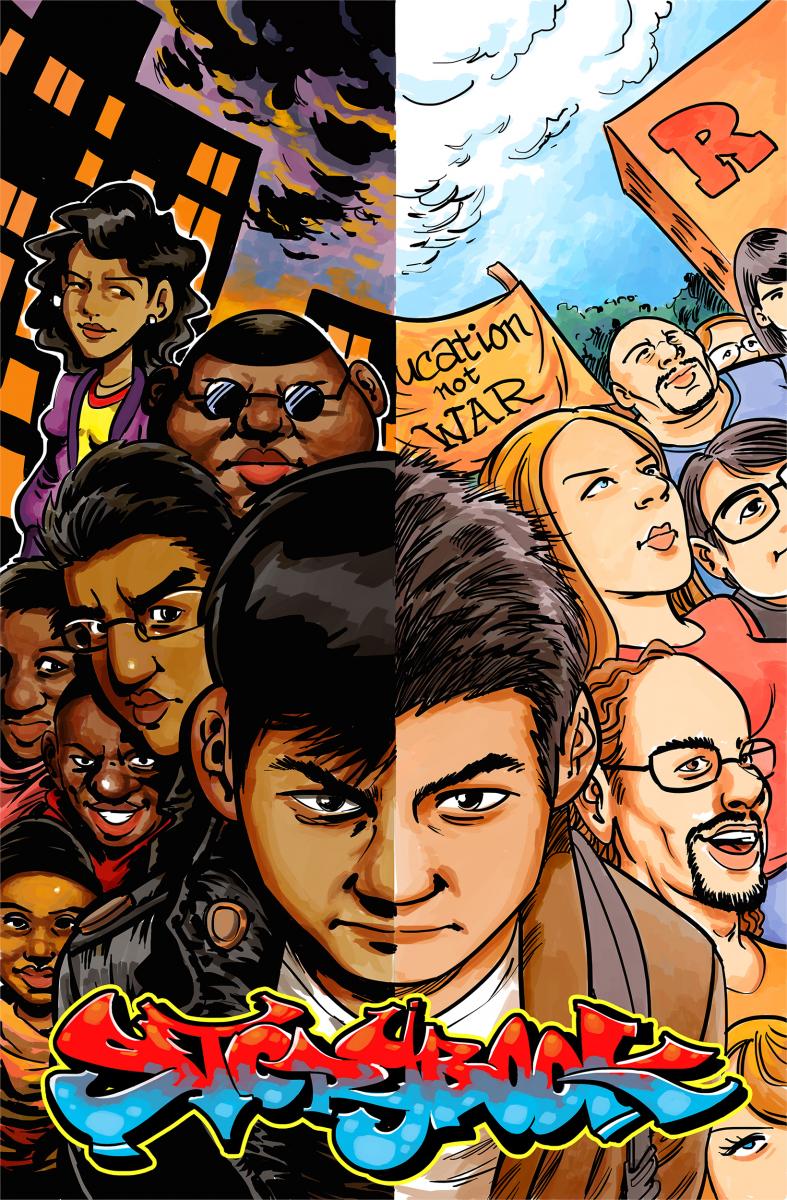 Romero explained, “Disparity in public investment, however, is a much larger problem than corrupt local governance.

The country overall is suffering the effect of a value system that rewards people by their ability to extort obscene profit by any means, not by whether they’re contributing something positive to the world.”

When asked how New Brunswick could develop in a way that would benefit all of its residents, Romero replied that “New Brunswick needs popular regime change if it’s to stand any chance of developing in a beneficial way for the people who live here.”

He continued, “The people who are in power have a very unfortunate track record of pushing out their poorer residents from the urban center to make way for unaffordable, exclusive luxury garbage. This unsustainable, shortsighted, destructive urban planning course is something that has to be done away with.”

Romero encourages full time residents to get out and vote.  He said that he is embarrassed by the fact that “usually around 5% of the city’s population votes whenever election time rolls around.”

Ultimately, Sam Romero believes that positive change can happen. But he also believes it will not happen without the inspired efforts of community organizers motivated to improve the greater good of all residents, no matter their income level.

Whether or not you agree with his views, Romero strives to be a successful community advocate and through his art, he hopes to make New Brunswick a city that better serves all of its residents.