Since the summer of 2011 the  show has grown from a do-it-yourself project by two friends to a successful internet series supported by Noisey, the music channel of youth-oriented media behemoth Vice.

Offering an alternative to mindless reality shows through its unique premise, the team executes spur-of-the-moment interviews with people they meet on the street then takes the viewer through the creative process as Green constructs a beat with the found sounds.

Green and Lipman-Stern have filmed at such diverse locations as a tent city on the outskirts of Camden, ancient plazas in Greece amid leftist protests, and the heart of Miami Beach during the wastefully extravagant Art Basel. 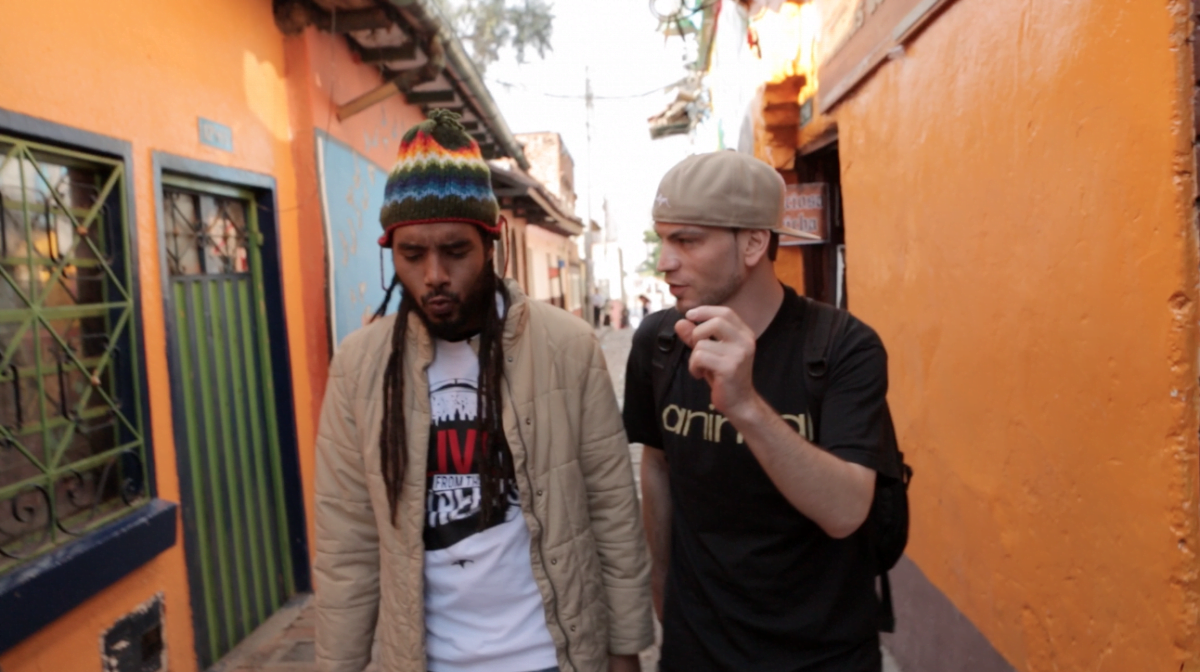 While Hip-hop heads remain loyal due to frequent appearances by well-known rappers and aspiring producers are captivated by beat-making how-tos, much of the show’s success can be attributed to the charismatic folks interviewed by Green and Lipman-St.

Each episode features different people met on the street and reflects keen social awareness historically associated with hip-hop, expressing positive energy by uniting people and giving a voice to the voiceless.

Hip hop-culture inspired the show.  Green was a DJ, turntablist, and avid rap listener, while Lipman-Stern hung out with graffiti artists and aspiring rappers.  Each got their start growing up in Highland Park and hanging out in New Brunswick.

But Green lamented, “The mainstream media only really covers rap and doesn’t cover the larger culture that is hip-hop.”

The larger culture is what inspires people to fuse social awareness with artistic creations, they told New Brunswick Today, bridging gaps among people from very different backgrounds by providing the opportunities to impress and gain acceptance through artistic creation.

This is what Hip Hop was about to Green and Lipman-Stern:  Whether making beats or graffiti, people would give you a chance because you spoke their language, the language of hip-hop. And if you were good, or if you brought the right mentality, you were accepted.

This mentality pushed them to give everyone a chance. It is easy for the Live From the Street crew to build a rapport with interviewees, because, as Green explained, “I speak the same language as them.  It’s called music.”

GROWING UP IN THE SHADOW OF HUB CITY
Hip-hop provides familiar terrain to Green and Lipman-Stern, both from Highland Park, who spent much of their formative years in New Brunswick.

During the 1990’s, Green and Lipman-Stern soaked in the social and cultural landscape of Hub City, ripe with energy fueled by punk, skateboard, and hip-hop cultures.

Green was a skater and music store regular whose days were spent racing from cops, making pit stops at Earth Core on Albany Street to watch skate videos, and visiting Planet X Music on Easton Avenue to check out releases not carried by the big retail stores.

With no skate parks in New Brunswick, a lot of skateboarding involved wandering around looking for spots. Green said this helped him develop a knack for meeting new friends on the streets.

“You interact with students, teachers, custodial staff, other athletes like BMX bikers or rollerbladers, cops, drug addicts, criminals, lawyers, small business owners, doctors, patients–basically everybody from all walks of life.”

Skateboarding wasn’t as accepted in the mainstream, so many skaters were social outcasts who released their energies and creativities towards a subtly outlawed form of expression, but this didn’t always sit well with the people they encountered on their skate journeys.

TURNING NEGATIVE INTERACTIONS INTO POSITIVE ONES 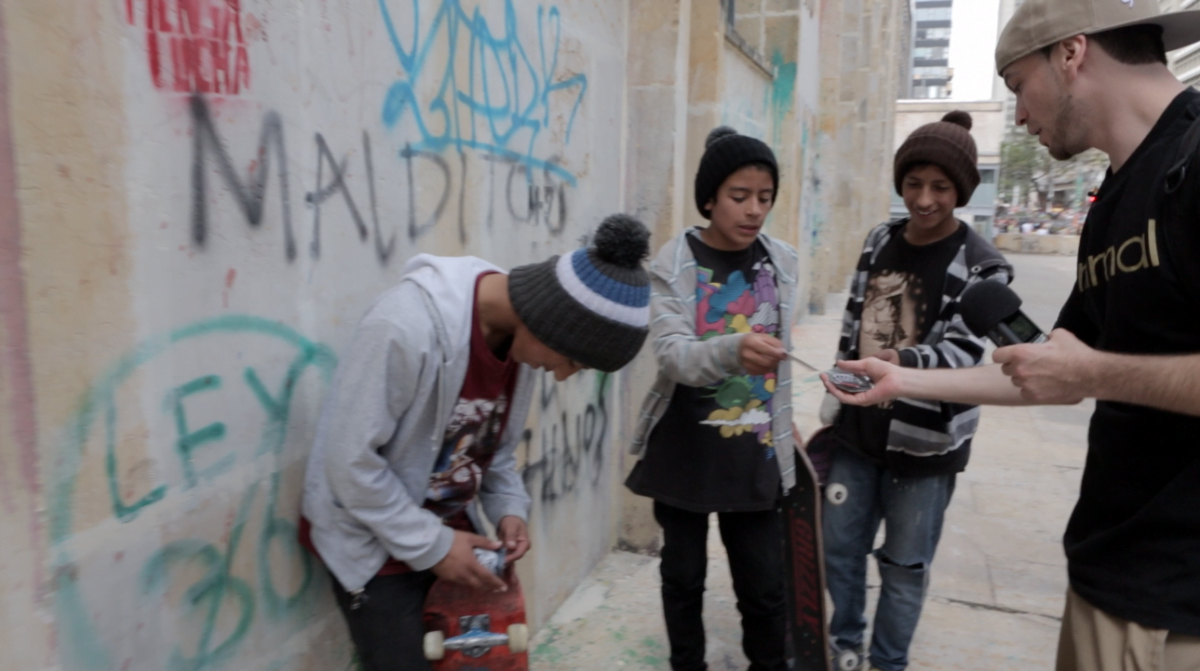 Green emphasized that skaters were often misunderstood: “Skateboarding can be a bit abrasive.  It’s loud and it does cause slight property damage, so when you skate around the city you end up having to have a lot of semi-negative conversations with people that don’t understand exactly why you are jumping up and down and sliding across benches and railings.”

These daily interactions helped Green develop very useful skills to improve interpersonal relations, “I think part of being a skater is learning how to communicate with all different kinds of people, mainly to smooth out these conversations and to turn what would be negative interactions into positive ones.”

Green described how he is always on a mission to find street sounds: “It’s very similar to what me and my boys used to do when we would search the streets for hours on end looking for spots to skate. I also think it’s similar as a graffiti writer searching for new walls to paint.”

Not unlike skateboarding, graffiti was an extracurricular activity for those who didn’t quite fit in, finding a voice and outlet through a subversive art form.

Lipman-Stern was a respected graffiti artist known throughout New Jersey by his early teens, having been profoundly affected by the art that graced the walls of highways around the state.

“At age five, I started noticing the bright colors along Route 1 on the concrete highway underpasses each time I’d be driving with my family. I had no idea what the letters or words meant but it was the most exciting thing I remember seeing from childhood,” Lipman-Stern told New Brunswick Today.

“Big words in bright colors and characters! All I could think was ‘what does that mean? what is it?’ and ‘I want to do that too!’” 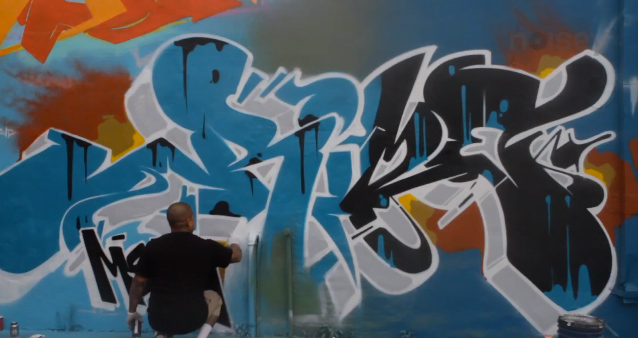 He also soon discovered that graffiti artists were not always who he thought they’d be.

“Graffiti taught me not judge a book by its cover.  The best writer could be a skinny teenage geek with no social skills, a built 50-year-old former marine, or your grandma.”

“THE RIVER RATS”
In the late 1990s, Lipman-Stern’s non-judgmental attitude came in handy when his curiosity was piqued by a unique sight on the banks of the Raritan River.

Stern said he clearly remembers, “driving with my parents across the bridge and noticing the homeless community along the canal. Back then, in the early 90s, there were people living in tents along the river in plain sight.”

Lipman-Stern eventually explored the area underneath the bridge and began to spend afternoons under the Albany Street bridge, learning about those who called it home.

“There was always a group of guys fishing, playing cards, drinking and hanging out. They were friendly and I found out the group called themselves The River Rats.”

“My friends and I started hanging out there almost everyday in the summer, fishing and chilling with these dudes.  They soon became like family members,” reminisced Lipman-Stern.

It is easy to see where Lipman-Stern developed his ability make people feel comfortable in front of a camera as he described the people he met.

Lipman-Stern described the motley crew: a freight train riding former oil rig worker, an indigenous Alaskan self-proclaimed shaman who walked around with a twisted wooden staff, a former club kid who’d fondly speak of his glory days, a man who hunted in the local woods and brought fresh venison to fellow River Rats.

“Some of the guys were homeless and others lived in the area. What I liked about these guys was they lived by their own rules, they always had interesting stories, were smart but just didn’t fit into normal society.”

Explained Lipman-Stern, “I always felt like an outsider myself.  I was into different stuff than most of the kids my age, so I really related to the River Rats because they too didn’t fit in.”

“But they weren’t judgmental at all. They’d listen to our problems with girls or family issues, whatever was going on in our 13-year-old lives.”

“Hanging out with the River Rats taught me not to judge others and to respect people from all walks of life. It also made me realize that homeless people and those living on the edge of “normal society” may be some of the most interesting, intelligent, and deep people you will talk to in life,“ said Lipman-Stern.

“ORDINARY PEOPLE CAN DO INCREDIBLE THINGS”
Easily the most endearing aspect of the show is the interaction among the creators and the people they meet.  And what makes this show special is the emphasis on humanity threaded through the history of hip-hop.

In Greece, an interaction with a diminutive street musician steals the show. Green crouches to eye-level with the small child sitting on a stool performing with his tiny accordion.

The child yells giddily into the mic and then swiftly switches his cowboy hat for Green’s fitted cap, which swallows the small child’s head. The kid gladly hams it up on camera, so Green steps a aside and gives him the spotlight.

“The purpose of Live from the Streets is to tell stories that have never been told, teach people not to be judgmental, show that talent can be found in the most unexpected places and show that we are all human by making banging hip-hop tracks with established celebrities, people living in tents, indie musicians, peruvian flute bands and everything in between,” added Lipman-Stern. 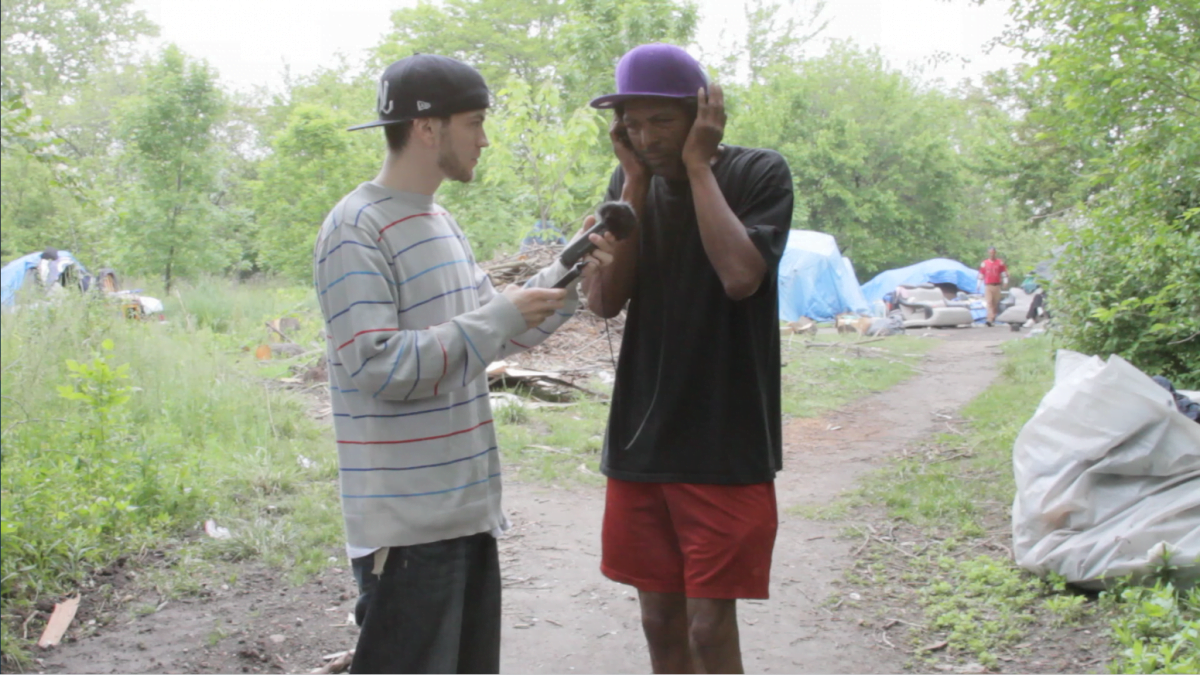 One of the most touching episodes is one in which Green and Lipman-Stern visit Tent City in Camden. They are immediately received by the community’s Assistant Mayor “Country,” who related a tale common to hip-hop listeners.

Country says he sold weed in North Carolina before moving north and getting involved in the cocaine business, thinking he “had everything,” but went to jail and found he “had nothing.”

Ultimately Green combined a vocal sample from County with a verse laid down by Newark-based rapper Pacewon, capturing the essence of Country’s message.

At the end of the episode, Green and Lipman-Stern return to show Country the finished, which brings the man to tears.

“Country was just so happy to hear himself on a real recording he could hardly believe it had actually happened. It was something he had dreamed about and we were able to make it happen,” Green proudly recalled.

Live From the Streets may not have changed Country’s life but brought him a simple joy and, more importantly, they confirmed his existence and let him know that others care about the people in Camden’s Tent City.

Still Lipman-Stern recalls his experience growing up in Central New Jersey as helping to define the show’s perspective.

Green reiterated their belief that “ordinary people can do incredible things.”

“In most businesses, especially music and entertainment, people are judged very heavily on the way they look.”

“It’s almost as though dressing sharp and being in style is a prerequisite if you want to be taken seriously,” but Green and Lipman-Stern avoid this tendency.

Green said, “We’d rather invite good-hearted, talented people that don’t fit the stereotype of what a hip hop artist, or any artist for that matter, looks like than invite people that look like what people are used to seeing.”

“We also find that the people who don’t fit the artist stereotypes have more interesting stories than the ones that the ones that do,” adds Green. “We offer them a chance to have their music recorded professionally and we pay them for their time.”

Green and Lipman-Stern don’t claim to change people’s life, The Live From the Streets crew simply does good deeds to make people’s days better, while bringing to a new generation some of the joys that inspired its creators.

Green and Lipman-Stern are hoping to take Live From the Streets to even more unique locales around the world.

A Live From the Streets album is in the works and they are in development stages for a TV show, but most importantly Green and Lipman-Stern want inform future artists that everyone has a story to tell if you just listen.