UPDATE: The Planning Board voted unanimously to approve the new projects 7-0.

NEW BRUNSWICK, NJ—The city’s Planning Board is preparing to take a final vote tonight on a project that its planners say will dramatically transform the College Avenue area.

And officials are so confident it will be approved, they’ve already announced a groundbreaking ceremony next Thursday.

Originally intended to house 800 students, the massive fourteen-story mixed-use structure proposed for 46 College Avenue would only house 500 under the current proposal.  According to testimony at a previous Planning Board meeting, most of the building’s 146 apartments will have four bedrooms and two bathrooms.

New retail shops along Hamilton Street may one day include an Urban Outfitters, or something like it, if artist’s renderings provided by New Brunswick Development Corporation (DEVCO) become a reality.

Also included in the plan are concessions kiosks that have been referred to by DEVCO officials as “boardwalk-style” or “stadium-style.”  One pavillion is 1,833 square feet and another is 559 square feet, according to a copy of the plans obtained by New Brunswick Today. 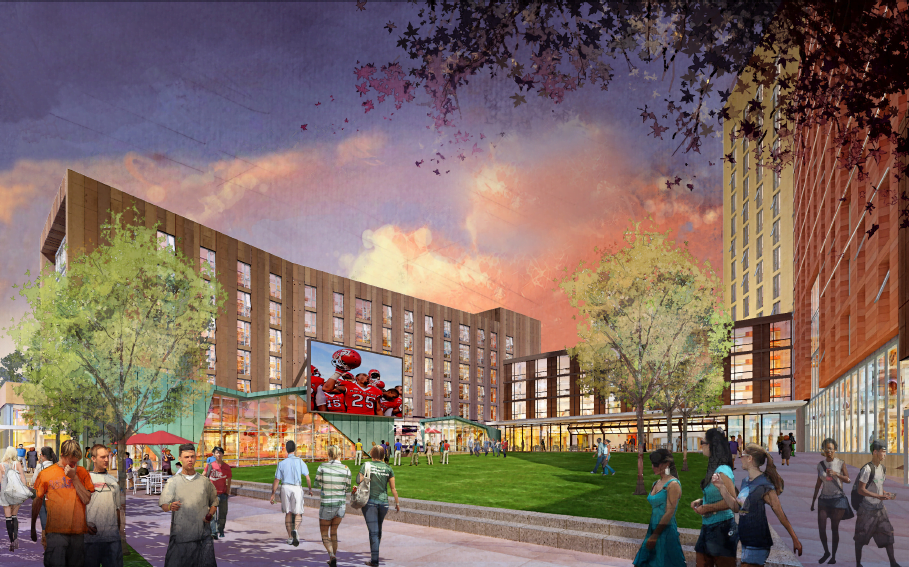 The plan calls for a breezeway near the intersection of those two streets to improve access to the central piece of the plan: a 23,000 square foot green plaza with a large video screen that officials say will most likely be open to the public 24 hours a day.

Dubbed “the Scarlet Green” or “Rutgers’ new living room” on a promotional website, the space would include a deck that will serve as an urban boardwalk of sorts.

A unique financing arrangement allows DEVCO, a private non-profit, to own the land and the building for several decades before Rutgers eventually takes ownership.

As we reported earlier this year, DEVCO sold a building they put up in downtown under a similar agreement with Rutgers for $44 million, partly to finance new College Ave. projects.

The $295 million development plans for College Avenue are much larger than even this superstructure.  Simultaneously, construction is going on to transform a historic block into a new Rutgers “honors college.”  That project includes both academic and housing buildings.

The Seminary is getting a new building on College Avenue, for which DEVCO has contracted with Michael Reisz and Company.

Still some are upset at the displacement of the grease trucks, a group of famous food vendors that parked in the same spot for 21 years.

“The former grease truck lot is being transformed into an appealing on-campus living experience to meet the occupancy demands for current and future students,” reads a new website set up by the developer, RutgersFutureByDevco.org.

“The U-shaped apartment-style housing development will feature single bedroom apartments (with up to four bedrooms per apartment), welcoming common areas, Wi-Fi, first-class retailers and concession stands to encourage an active and energetic environment.”

DEVCO appears to be most proud of their plans for a public space that will replace the popular destination of the famous trucks, which were kicked out of the parking lot to make way for the new building.

“This exciting urban park will serve as a focal point for students, faculty and surrounding neighborhoods with seating, a real boardwalk and a large outdoor video screen that will help to create a sense of community.”

The dorm would take three years to build, and construction has already been a point of contention after Rutgers and DEVCO closed down a low-quality bus stop and replaced it with an even lower-quality temporary facility to accomodate the anticipated construction.

If approved and all goes according to plan, students will move into the dormitory for the first time in the fall of 2016.

Tonight’s Planning Board meeting will be held at 7:30pm on the top floor of City Hall, 78 Bayard Street.  All persons in attendance have the opportunity to make comments or ask questions about the proposal following the presentation.