NEW BRUNSWICK, NJ—Police are investigating a robbery and assault that took place in an apartment building on Union Street near Rutgers College Avenue Campus on Friday night.

New Brunswick Police Department was first notified of the incident at 7:02 pm when a resident of 40 Union St. attempted to alert authorities that he was being threatened by three unknown assailants with a handgun who demanded he turn over his property.

Dispatchers alerted police to the robbery in progress according to police radio transmissions, but it took more than twenty minutes for police to locate the scene of the crime due to inaccurate location information provided by AT&T.

“When the call started, I could hear them on the front porch outside saying he’s outside and then he took him into the house and asked him for his money,” said a New Brunswick dispatcher according to police radio transmissions. 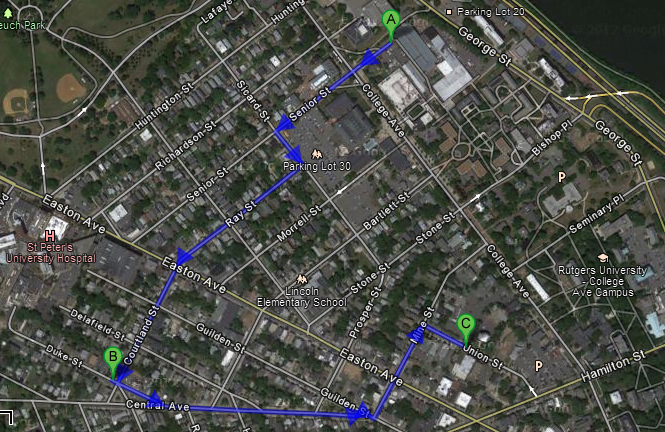 But the dispatchers had inaccurate information on the location that the victim called 911 from his “pay-as-you-go” cell phone.

“I put the coordinates into Google, it’s coming up as 622 George Street, a parking deck for Rutgers University,” the dispatcher said.

“AT&T said the phone is within 50 meters of that address,” said another.

Rutgers Police spokesman Michael Rein said that cell phone tracing is imperfect, and depends heavily on which cell phone tower is routing a call and which phone is being used.

“It was a technology issue and we had very little information.”

Rein said that as the “open line” continued to stay open, more accurate data eventually revealed the source of the call as “within 109 meters of 46 Union Street,” a sorority house next door to the victim’s building.

“When the victim did not immediately comply with their demands, the assailants assaulted the victim and then fled the apartment after stealing property from the apartment ,” Rutgers police said in a statement.

The assailants were described as black males wearing masks, hooded sweatshirts and gloves entered apartment unit through an unsecured door. The victim, who received non-life-threatening injuries, gave additional details to authorities, describing of the one assailant as wearing a red bandanna and another wearing yellow gloves.

Although the victim and the property are unaffiliated with Rutgers, a campus crime alert was issued at 10:13pm.

The three-floor multi-unit apartment building, currently advertising luxury studio apartments for rent, sits across from the University parking lot that is home to the grease trucks.

Mitch Broder, the owner of Premier Properties, said the incident was the first of its kind at his Union Street apartment complexes.  The company is currently advertising apartments for rent in four different buildings on the street.

“Although the police investigation is ongoing, I believe that this was an isolated incident and that the party’s involved may have known each other,” Broder told New Brunswick Today.

A resident of a similar-style multi-dwelling apartment building on the block said that she contacted police regarding the robbery that same evening having thought she heard something, suggesting that they use her building’s security cameras since they face the street.

This is an active investigation and anyone with any information is encouraged to contact the New Brunswick Police Department at 732-745-5200, or the Rutgers Investigation Unit at 732-932-8025.