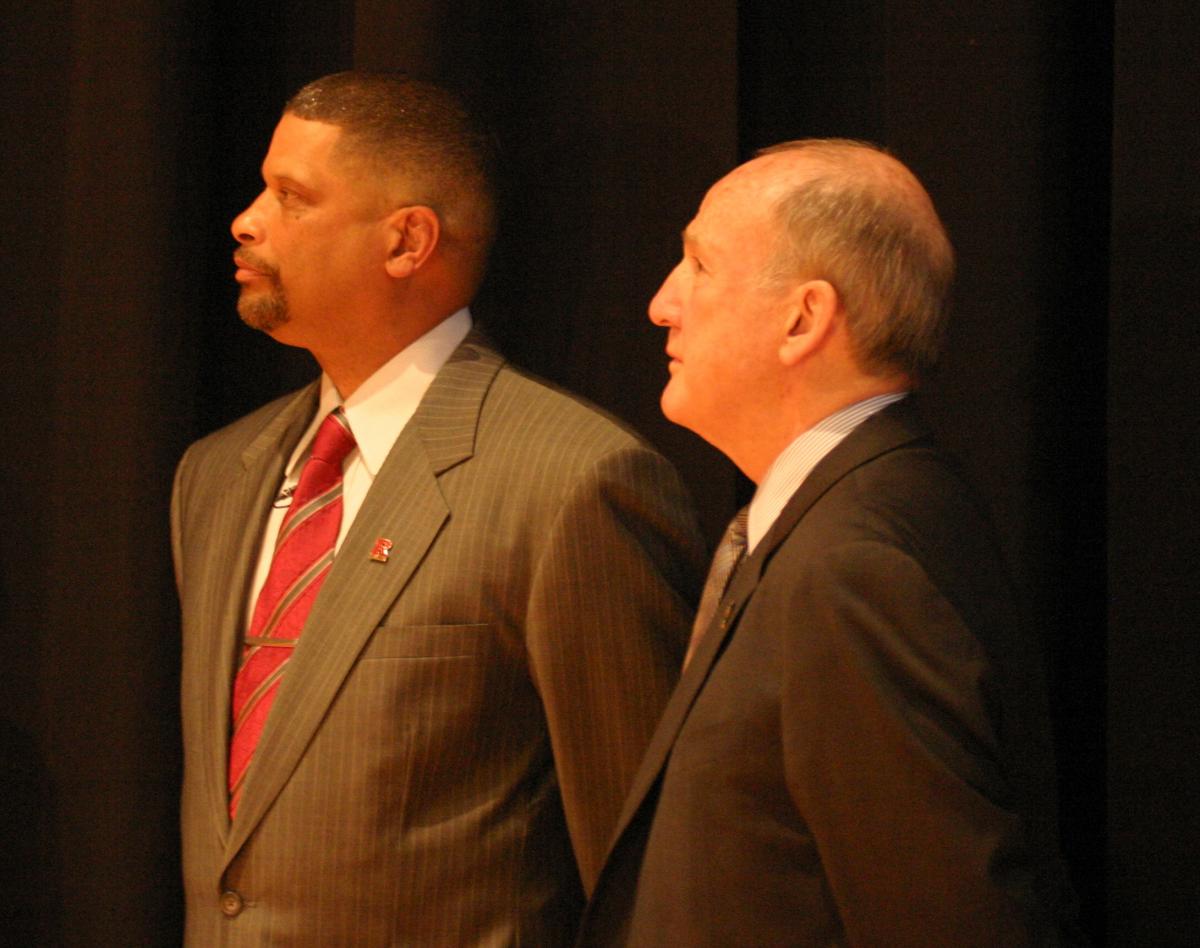 NEW BRUNSWICK, NJ—Eddie Jordan was named the next Rutgers men's basketball coach in front of a crowd of nearly 300 people and more than a dozen television camera yesterday afternoon at the College Avenue gym.

"Today is about the future of Rutgers basketball, and we're moving forward," proclaimed Jordan.  "There's some healing process that has to be done."

"We want our guys to feel good about themselves, about their future, about their basketball team. That is part of my responsibility, but, as always, it's also part of yours, because we're all one, and we all need help to regain our integrity back."

Jordan attended Rutgers and played basketball between 1973 and 1977. He helped the men's basketball team achieve their only NCAA Final Four in team history during a the 1976 season, and was named the East Regional Most Valuable Player in that tournament.

He also earned an honorable mention All-America status, Rutgers career records for assists and steals, and a nickname: "Fast Eddie."

Jordan graduated from Rutgers as part of the Class of 1977, with a bachelor's degree in health and physical education.  He went on to a long career of playing professional basketball, and coaching in both pro and college positions.

Rutgers President Robert Barchi admitted that the announcement of Jordan's hiring was the "most fun I've had in front of TV cameras in the past month," acknowledging the difficult scandal that brought about a new coach for the team.

Acting athletics director Carl Kirschner reminisced about his coming to Rutgers as an assistant professor in 1976, and seeing Eddie Jordan playing very nicely as a senior that year.

"I actually watched Eddie Jordan play in his senior year the last year that The Barn was used for basketball," Kirschner recalled, shortly before showing a short film depicting Jordan's career.

Jordan thanked both Barchi and Kirschner, as well as "surrogate brother" and "agent" Brian Perkins, who had helped motivate Jordan during his career.

This does not explain why he withdrew from candidacy for the Rutgers coaching position in 2010, however.

When asked why he wanted to coach for Rutgers, Jordan pointed to emotion and a sense of solidarity: "It's all from the heart, man, it's from the heart. I know I have a lot of support," he said.

"This is our school. The Rutgers community has to help all of us to bring our university back to some respect and some integrity."

Jordan asserted that he was not concerned about the five players that had recently defected from the team, and he felt he would be a strong recruiter for the program.

Jordan's professional career began when he was drafted by the Cleveland Cavaliers in the second round of the 1977 NBA draft.  He was soon back in New Jersey, however, sent by Cleveland to the New Jersey Nets halfway into his rookie season.

He eventually moved on to play for the Los Angeles Lakers in the 1980-1981 season, winning a championship with the team in 1982.  Jordan played for a short time for the Portland Trail Blazers before leaving the NBA in 1984.

In 1992, Jordan became an assistant coach for the NBA's Sacramento Kings and was promoted to head coach of that team in 1997. Jordan racked up a dismal 33-64 record as head coach of the Kings, and was fired at the end of the season.

Jordan joined the New Jersey Nets as lead assistant coach in March 1999, and the team went on to win an Eastern Conference Championship in 2002 and the Atlantic Division championships in 2003.

Jordan then took a struggling Washington Wizards team in 2003 and turned it around the following year, bringing home the team's first victorious postseason series since 1982.

Jordan then joined the Philadelphia 76ers, but lasted only one season, being given the boot on April 15, 2010.

Rutgers was apparently interested in Jordan at this point, but he decided to look for another coaching job in the NBA.

Instead, the university hired Mike Rice and Jordan joined the Los Angeles Lakers staff as an assistant coach for the 2012-2013 season.