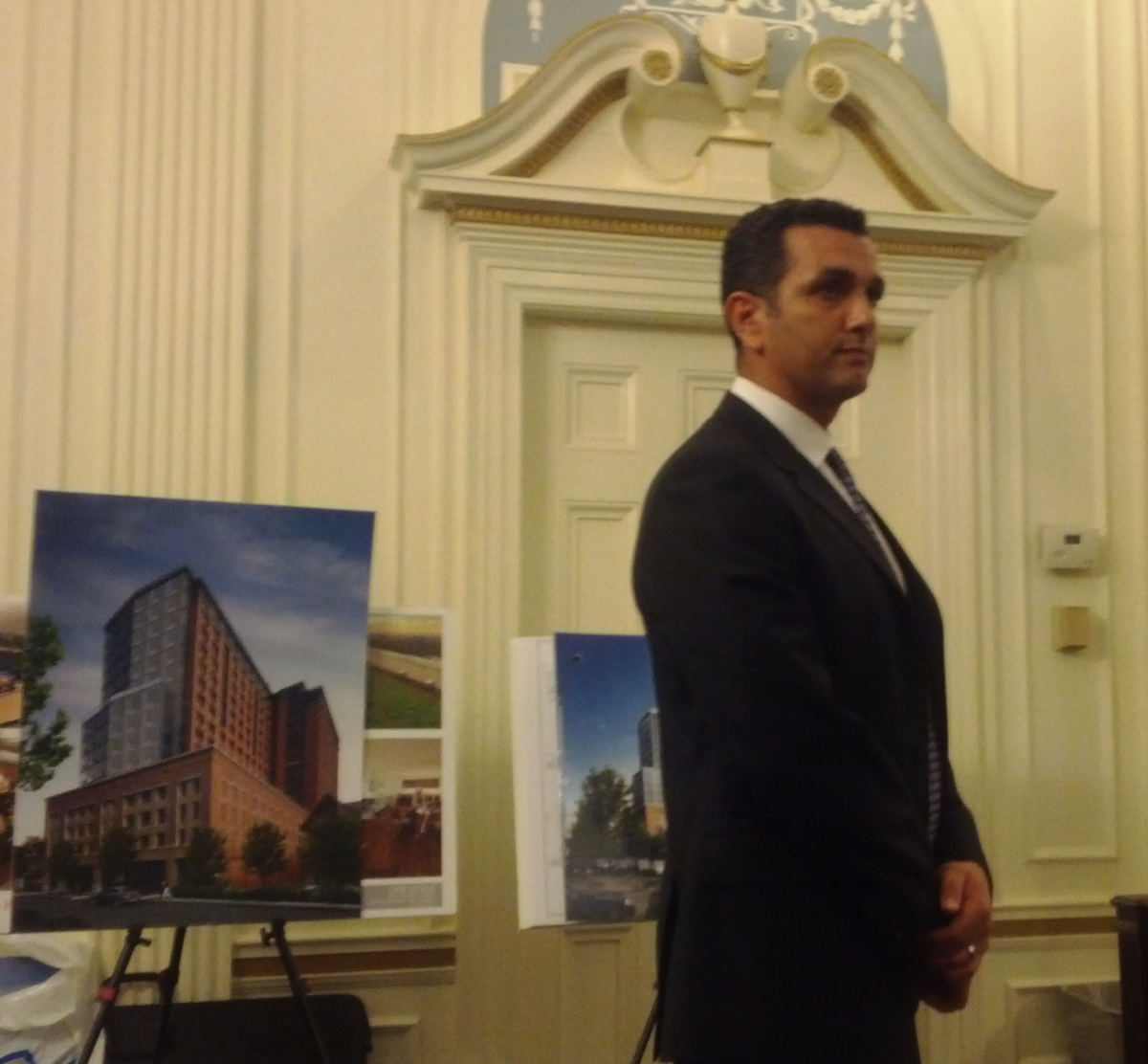 NEW BRUNSWICK, NJ—After a tense four-hour Planning Board meeting last month, one of the city's biggest property owners and developers unanimously recieved the board's approval for their latest redevelopment project.

At 135 Somerset Street, Boraie Development plans to demolish eight homes and build a luxury apartment building that will be the one of the tallest in the city's Fifth Ward, second only to the company's other skyscraper, One Spring Street.

The Boraie family has been one of the New Brunswick's most generous political contributors, and at the same time secured millions in tax credits from the state, as well as 30-year tax exemptions from the city for nearly all of their projects.

Sam Boraie testifies before the Planning Board regarding his
company's plan for a 16-story highrise at 135 Somerset St.

But at least one family member was also frequent contributor to several questionable fundraising committees that went by vague, official-sounding names such as "Women For Good Government."

And none of this takes into account donations made by one of the firm's subsidiaries, Albany Street Plaza Urban Renewal Development Corporation, an entity created to reap tax breaks on the developer's first major redevelopment project, two office/retail towers at 120 Albany Street.

But the biggest recipient of Albany Street Plaza's generosity was the NJ Democratic State Committee.  Since 2001, the company donated $62,000 to help Democrats get elected and re-elected to state offices.

The New Jersey Economic Development Authority, a state agency, offers "Urban Transit Hub Tax Credits" to qualifying development projects near certain train stations in NJ.  Their board only approved thirteen such credits so far, but two of them went to Boraie Development's projects.

Boraie's proposal for a new residential development on Rector Street in Newark was recently re-worked and given an even bigger tax credit than before.  The credit went up from $13.4M to $20.7M.

While Boraie's ample donations to politicians were no secret, some fundraising operations that he gave to operated in a much more secretive fashion.  In fact, as many as a dozen similar committees with many of the same donors served merely as conduits to enable individual and corporate donors to exceed legal limits on political donations and to avoid violating pay-to-play reform laws intended to limit money's influence on government.

New Brunswick candidates never received funds directly from the city-based political fundraising operations known as Women For Good Government and the Raritan Bay Leadership Fund.  However, their funds were in some cases "wheeled" to groups like the MCDO that later passed the money on to the city's mayor and council candidates.

On Women For Good Government's official paperwork, the group's treasurer Deborah Celey listed both a New Brunswick PO Box as well as 1050 George Street as her address.  Celey has been a strong supporter of Mayor James Cahill, and has been appointed by him to serve on numerous city boards and commissions over his 21 years in office.

She served as Vice Chair of the New Brunswick Democratic Organization and a board member on the city's Zoning Board until 2011, as well as several other appointed positions.

The fact that Celey served as one of only three people ever officially connected to Women For Good Government suggests that local officials were also likely to have been aware of, if not involved with, the group's fundraising efforts.

One thousand dollars made its way into Mayor Cahill's campaign fund, from the Eatontown-based Coalition for Government Efficiency in September 2008.  The organization gave Cahill the same amount one year later.

Coalition for Government Efficiency's Chairman is John Tully, a former head of the state's Division of Revenue.  Tully was one of only two leaders of these shady organizations quoted in the Star-Ledger's original article published on Easter Sunday.

"If anyone gives directly to a candidate, there are specific rules to prohibit them.  So we've given them a different path."

When Cahill faced the voters for re-election in the 2010 Democratic primary, he took $19,500 from the PAC's including the Coalition for Government Efficiency, which gave $5,000 to Cahill and his running mates, Rebecca Escobar and Kevin Egan.

Eight-thousand dollars was transferred from the ironically-named "Committee for Civic Responsibility" to the campaign committee for Cahill, Egan, and Escobar on May 4, 2010.

Then, on May 25, the campaign received $4,000 from New Expectations, a PAC based in Edison that may have ties to State Senator Jon Wisniewski, also the chairman of the state's Democratic State Committee.

And, with one week to go until Election Day, Cahill, Egan, and Escobar's campaign committee accepted a $2,500 donation from Bernardsville-based "People Energizing Government PAC."

They went on to win the election by a 3-to-2 margin, and PAC's made up the largest portion of their fundraising. 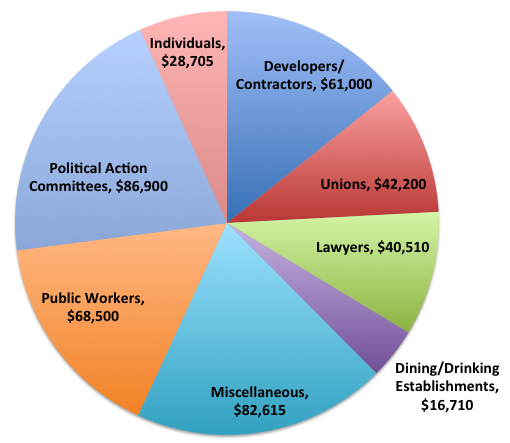 An analysis of contibutions made to Cahill's campaign fund, his campaign committee with Egan and Escobar, the New Brunswick Democratic Organization, and Unite New Brunswick reveals that other political committees comprised the primary source of funding.

First and foremost was Joseph Egan, a Councilman since the 80's who was hoping to see his son Kevin take the position from him after his departure.

Smith's election fund chipped in $3,400 to the NBDO in October 2010, and Congressman Frank Pallone's campaign warchest gave $600 in October 2009 and another $600 the following year.

The Democratic Governors Association gave $7,200 to the NBDO in 2009, though ELEC's records do not include a specific date for the contribution.

Editor's Note: The author of this article was a volunteer on the 2009 ballot question campaign to change the city's form of government.  He also worked for The Citizens Campaign from 2010-2011.