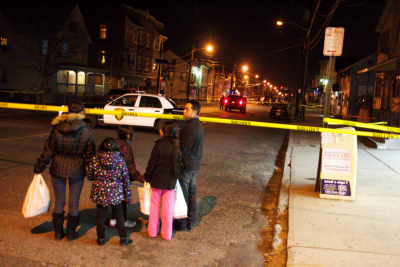 UPDATE: This story has been updated to include the identity of the victim, and further information on the shooting.

NEW BRUNSWICK, NJ—The Middlesex County Prosecutor’s Office is once again investigating an incident where New Brunswick police fired their guns at people in the troubled Remsen Avenue neighborhood.  The latest victim, a 19-year-old man, was rushed to a hospital where he is currently undergoing treatment.

News12 New Jersey’s Marci Rubin posted on Twitter that the family of 19-year-old Victor Rodriguez had identified him as the victim in the shooting, adding that they fear he may be paralyzed.  The tweet also said that Rodriguez’s friends say he had a fake gun.

The shooting occurred just one block from the backyard where an unarmed 46-year-old man, Barry Deloatch, was killed by police.  A grand jury investigation is currently underway into Officer Brad Berdel, who fired the shots that killed Deloatch shortly after midnight on September 22.

Police radio transmissions from tonight indicate that the officers involved in this shooting were Detectives Christopher Bornheimer and Andrew “Drew” Weiss, though it is not yet clear who shot Rodriguez.  Weiss filed 11 “use of force” reports in 2010, third-highest of the city’s 136 sworn officers.

A statement released by the prosecutor’s office says NBPD officers on routine patrol came upon an “altercation,” at about 6:14pm near the intersection of Remsen Avenue and Seaman Street.

Police radio transmissions reveal the chaos that unfolded at about that time.

Within seconds of the initial “shots fired” announcement, a voice expresses concern about a vehicle preparing to leave the area: “There’s a white car taking off towards Lee Avenue, a white car, that plate I called back,” says one officer.

Then, another voice asks for backup: “Brunswick, get everybody over here.  We’re involved in it,” presumably referring to the shooting.

It does not appear that the white vehicle was immediately stopped or located by the police, because five minutes later, the car’s license plate number (ZLR 23T) was broadcast again over the police radio frequency, followed by “[Detective] Drew [Weiss], you lookin for anybody else involved in this?”

Another voice later remarks that there was a large crowd in the area on the unseasonably warm Tuesday evening.

“Hey New Brunswick, can you have somebody come to Remsen and Seaman please?  There’s like a thousand people out here with us and we need EMS here for this guy.”

Neither the recordings nor the press release from the prosecutor’s office were clear on how the altercation escalated into gunfire, nor does it definitively say anyone had a gun besides the officers.

The release also said the names of the officers were being withheld, though it did not state a reason for doing so.   The prosecutor’s office waited weeks to name the two officers involved in the Deloatch killing, Berdel and former Rutgers University football player Daniel Mazan.

New Brunswick Police, along with Middlesex County Sheriff’s officers and North Brunswick Township police have continued to maintain the perimeter around a three-block area while investigators gather evidence well into the night.

A new spokesman for the City of New Brunswick, Russell Marchetta, referred all questions to the county prosecutor’s office, which will be handling the investigation.