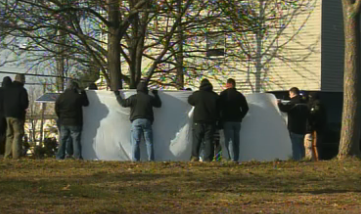 NEW BRUNSWICK, NJ—It appears two people were murdered in two crime hotspots within 10 hours of one another the night of January 9.

Oswaldo Lozaro, 21, died from gunshot wounds sustained near the intersection of Louis and Somerset Streets in the Fifth Ward at 8:32 pm.  Mr. Lozaro was a city resident, according to a report on New Brunswick’s Patch.com.  He died at Robert Wood Johnson University Hospital shortly before 10pm.

The next morning, a dead body in Pittman Park was reported to authorities shortly before 7am.  The person, who has not yet been identified by authorities, appeared to have sufferred a gunshot wound.  News12 was on the scene, as police loaded the body into the coroner’s van.

Pittman Park is located just half a block from 105 Throop Avenue, the site where a New Brunswick cop shot and killed Barry Deloatch on September 22.