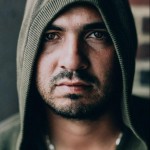 NEW BRUNSWICK, NJ—In his first year as a New York Giant, New Brunsick native Jonathan Casillas had a career-high 88 tackles, as well as two sacks, a forced fumble and an interception, despite starting just seven games.

Casillas, once a star player for the New Brunswick High School Zebras, made his presence felt from the very beginning of the season.

JERSEY CITY, NJ—On April 25, New Brunswick's Leroy Davila will be making his long awaited return to the boxing ring against an opponent who goes by the name of Dylan Price.

For the last few years, Leroy “Lucious” Davila has been a standout boxer in the amateur ranks and has done nothing but dominate in the NJ Golden Gloves tournaments and in the National Boxing Championships.

The Giants are the fourth NFL team Casillas will play for in his career, and the third in less than a year.

As we reported, a sour start at the beginning of the season turned into a dream come true for the 27-year-old football star, after he was traded to one of winningest football teams in NFL history.

EDISON, NJ—A huge fire broke out sometime around 10pm on January 29 at Township's Department of Public Works garage for the fourth time in three years.

The fire completely destroyed the building, and most of its contents, including eleven "salt spreaders," three street sweepers, a fire engine, and several other vehicles used to pave and maintain roads.

FOXBOROUGH, MA—In his sixth season playing in the NFL, one of the best things that could have happened to Jonathan Casillas' career happened.

After spending the last year and a half playing for the struggling Tampa Bay Buccaners, Casillas was traded to the New England Patriots, who have established themselves as one of the greatest teams of all time.

In Tampa Bay, he played for former Rutgers University head coach Greg Schiano, who was fired after a rough 2013 season.

NEW BRUNSWICK, NJ—Former pro boxer Joey Negron has been in the boxing game since 1979.

Negron, who was born in Brooklyn, started boxing at the age of 10 and had more than 90 amateur fights.

FREEHOLD, NJ—The New Brunswick High School Zebras football team shocked Freehold Township Patriots as they came from behind to win in overtime, bringing the team to 3-4 on the season.

The Zebras star running back Samad Davila helped lead the way as he carried the ball 24 times for 129 yards and 3 touchdowns.

Although Davila was the games Most Valuable Player, Zebras Quarterback Trevon Blakey threw the game-winning 25-yard Touchdown pass to Maurice Ffrench in overtime.