By: Jonah Davidov
In: Activism & Organizing 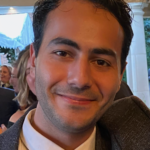