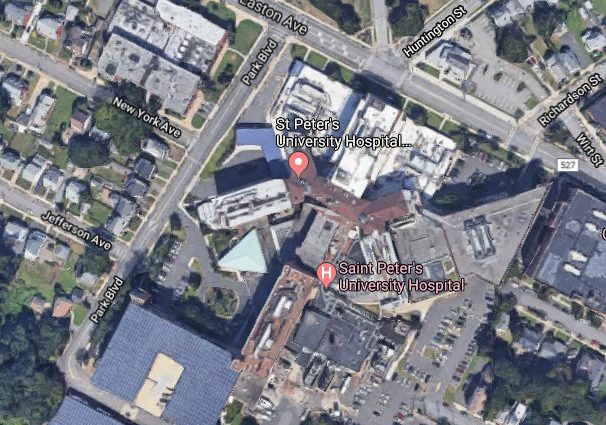 NEW BRUNSWICK, NJ—A man survived a fall from a sixth floor window at St. Peter’s University Hospital, after landing on a lower-level rooftop.

“An individual was found early this morning on a first-floor roof of Saint Peter’s University Hospital after falling from an open window,” hospital spokesperson Michelle Lazzarotti told New Brunswick Today on January 13.

The man was found at approximately 8am. It’s not clear how long he was left injured on the roof before police, fire, and emergency medical services were alerted and called to respond.

New Brunswick Today has learned the fall victim is a 33-year-old man from Union County.

“We appreciate the efforts of the local fire department, police and emergency medical services personnel for their part in the active rescue and treatment of this individual, who was then transported to Robert Wood Johnson University Hospital,” said the St. Peter’s spokesperson.

It’s not clear why the man was transported from one hospital to the other and officials at both hospitals have been reticent to speak about the incident.

“We extend our heartfelt thoughts and prayers to this individual and family,” said the St. Peter’s spokesperson, who noted New Brunswick police were investigating. “Out of respect and for the privacy of this individual, we have no further comment.”

RWJBarnabas Health Systems, the owners of the other Hub City hospital, recently signed a letter of intent with St. Peter’s, a possible first step towards a merger.

A spokesperson for RWJ did not provide a requested status of the patient.