Wolfthal was previously the Athletic Director at Bishop Ahr, a Catholic school in Edison.

In March, he announced his retirement from that position, shortly before the school changed its name back to St. Thomas Aquinas High School.

It is not known how the recent retiree was chosen to take over New Brunswick High School’s Athletic department or how long he will remain interim Athletic Director.

He takes over for Richard Jannarone, the longtime school district Business Administrator who filled in for ousted AD Craig Lowery in October and November.

Wolfthal’s salary is not known, and the hire was not listed in any of the Board of Education (BOE) personnel committee reports.  Jannarone did not immediately respond to a request for Wolfthal’s salary.

BOE members did not even mention Wolfthal by name in their most recent public meeting on November 19.

“We are conducting full-time athletic director interviews,” Sadowski said, adding that they were taking place the week of November 18.

Lowery was demoted following a scandal that cost the NBHS Zebra football team four wins, including some big upsets that were overturned after it was discovered an ineligible player had participated.

As we reported, that ineligible player had transferred from from Bishop Ahr to New Brunswick High School in February, but Lowery allegedly dropped the ball on getting a required waiver from the NJ State Interscholastic Athletics Association (NJSIAA).

Wolfthal’s new position in New Brunswick comes more than four years after an infamous email of his started a controversy.

In the email to he wrote to fellow Athletic Directors, he told those who didn’t vote against a controversial rule change he opposed to “GO FUCK YOURSELVES.”

The tirade came after a vote on a big change that would have forced the Catholic school to be grouped in a division with exclusively non-public schools for both football and wrestling.

This upset Wolfthal because it meant Bishop Ahr would have to compete with powerhouse schools like Don Bosco and Paramus Catholic, prompting him to send the unprofessional email.

He argued that this would doom his school’s football program and require them to travel farther for their games.

He later apologized for the email, and remained with the Catholic high school for another four years, before finishing his tenure there after 39 years as Athletic Director.

New Brunswick and St. Thomas Aquinas High School are both members of the Greater Middlesex Conference (GMC), though they play in different divisions. 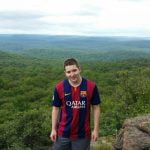