By: Dan Israel
In: Government & Politics 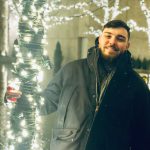