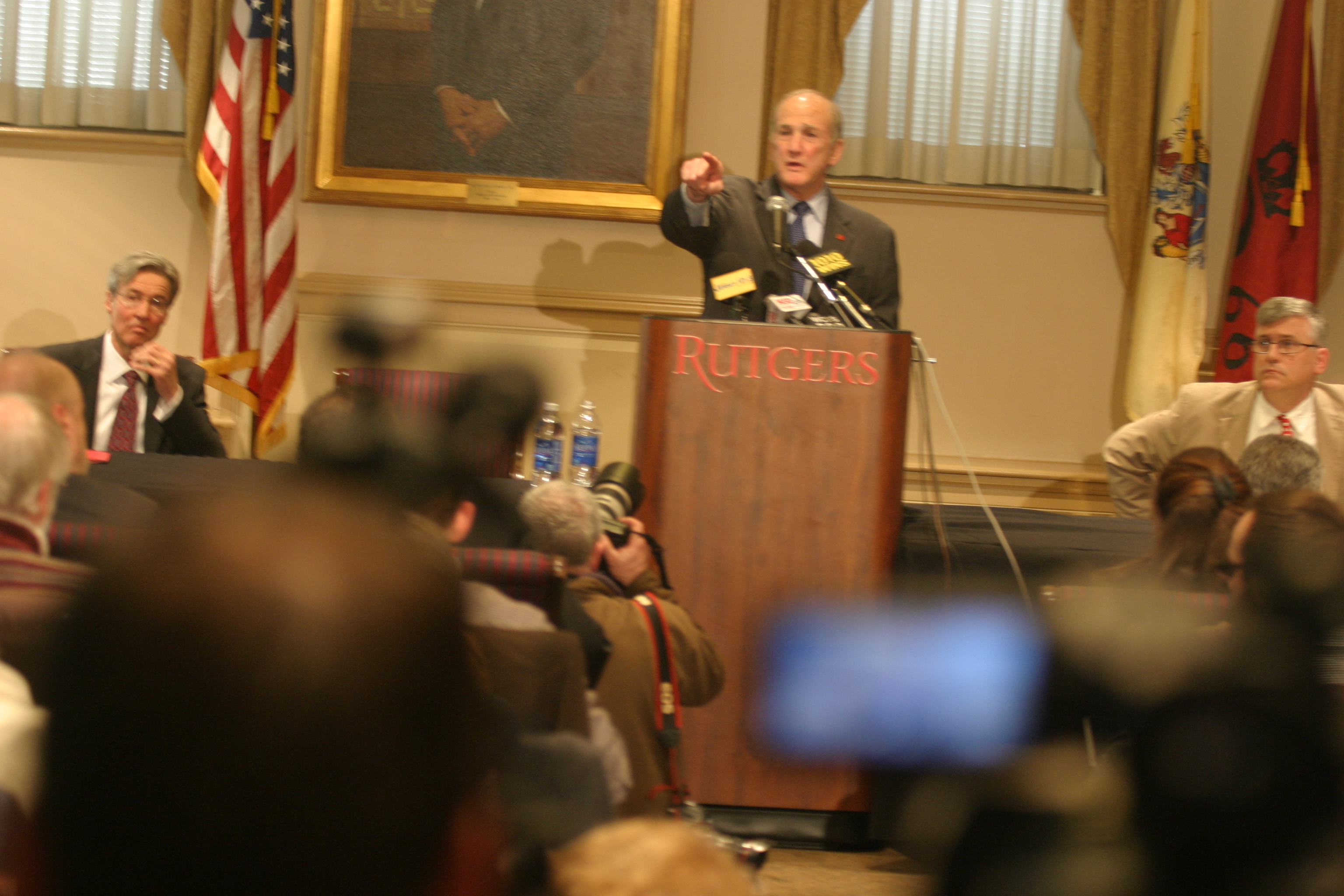 While hundreds gathered to call for immediate action to combat the climate crisis, just a few blocks away, Rutgers’ outgoing President Robert “Bob” Barchi was cracking jokes at the expense of students in a Senate meeting and backtracking on a commitment his administration had made in his name earlier that week.

During a question and answer period following his speech, Barchi appeared to contradict his own administration’s prior statements, and it was clear he was dismissive of the reporting of the school’s student newspaper.

At issue was Barchi’s support, or lack of support, of a firm timeline for Rutgers to cut back on carbon emissions, the leading cause of global warming.

“Oh you’re reading from the Daily Targum?  Well that’s part of the problem,” President Barchi told one man who questioned him following the President’s final “State of the University” speech on September 20.

Barchi proceeded to make a distinction between his actual position and what had been reported by in a front-page Targum article authored by Brendan Brightman.

But Brightman’s article was based on comments emailed to him on September 16 by the university’s main spokesperson, Dory Devlin. New Brunswick Today has requested copies of the email conversations under the Open Public Records Act.

While Barchi was insulting the Targum and contradicting his own officials before a dwindling crowd, the largest protest of the year was growing fast on Voorhees Mall.

The students behind that movement had been pressuring Rutgers to divest from fossil fuel companies, develop a plan by next year to go carbon neutral by 2030, and establish and fund an office of sustainability.

“President Barchi and his administration have responded in an offhanded, shallow, and incomplete fashion. We all deserve more,” said David Hughes of the Rutgers faculty union and one of many speakers during the September 20 “climate strike” protest.

“When is President Barchi going to take the climate crisis seriously?” asked Hughes.

In the original article authored by Brightman, a skeptical Hughes said his union “appreciates the spirit of cooperation and goodwill evident in President Barchi’s first response to Friday’s rally,” but maintained “it is unclear whether he is, in fact, committing the University to carbon neutrality by 2030.”

The Targum’s September 17 headline “Barchi supports carbon neutral plan for 2030” may have been based on a reliable source, Rutgers public relations staff, but it was disputed by Barchi himself three days later.

It was unclear if Barchi had actually read the article, but he rejected the premise, even though it contradicted his own administration’s statements.

Brightman had quoted Devlin as saying: “President Barchi commends members of our community for highlighting this issue and fully supports developing a plan to reach carbon neutrality at Rutgers University by 2030.”

“During an address to the University Senate on Friday, President Barchi reiterated his intention to appoint a faculty task force to examine carbon neutrality and expects that membership will be announced this week,” Sestito told NBToday.

The spokesperson was unable to say whether or not she attended Barchi’s speech, and did not respond to follow-up questions about why the meeting was not video recorded.

“The statement I provided is all I have,” Sestito said.

In meandering remarks to the Senate, Barchi also took aim at the “aggressive” deer that populate the area, and questioned the strength of Rutgers ties to the state government.

Barchi re-used some of his favorite material, joking about his administration’s improvements to College Avenue by suggesting that, before the upgrades, there were so many pedestrians struck by vehicles “it was like bowling for students.”

“Are we even a state university anymore?” Barchi asked rhetorically towards the end of his apparently unprepared remarks, stating that “at some point” Rutgers becomes closer to “state-affiliated” than a true “state university.”

Barchi was caught off guard by University Senator Neeharika Thuravil, who questioned him on the closure of the school’s three pharmacies, stressing their importance to the reproductive and sexual health of students.

Barchi, who is also a medical doctor, appeared not to know much about the move.

In a recently-published article on that topic, Brightman quoted one Rutgers Vice President as saying the pharmacy closures were “something that we have been looking in and working toward for a year or two trying to investigate.”

But Barchi, who is paid a $726,464 salary, spoke as if he had nothing to do with the decision and only learned of it recently.

“You know, that’s something I just heard about,” said Barchi, before asking if “Brian” was around to help him. “That, I’m just going to have to get more information.”

The closures were first reported by Brightman and Daniel Han on September 3, 17 days before Barchi’s annual address. That report was picked up by a variety of news outlets including NJ.com and the Associated Press.

New Brunswick Today brought Barchi’s remarks to the attention of the Daily Targum, which subsequently reported being told by a university spokesperson: “No, the president does not retract his statement.”

“A University statement that The Daily Targum received said, ‘President Barchi commends members of our community for highlighting this issue and fully supports developing a plan to reach carbon neutrality at Rutgers University by 2030,'” said Bansal.

“The University communicated to us that President Barchi fully supports developing a plan to reach carbon neutrality at Rutgers University by 2030 and that’s what we wrote about, with direct quotes from a University spokesperson,” Bansal continued.

Barchi did not respond to NBToday when we asked if he regretted his apparent insult of the news outlet, but the university’s public relations professionals reached out instead.

“The President has long been a supporter of the Targum,” said Devlin. “He meets with the Targum’s editorial board every semester and has since first arriving here at Rutgers.”

“His off-hand comment in response to a questioner was not to be critical of the reporting in the story, but rather of the headline which implied that the President supported an existing plan for carbon neutrality.”