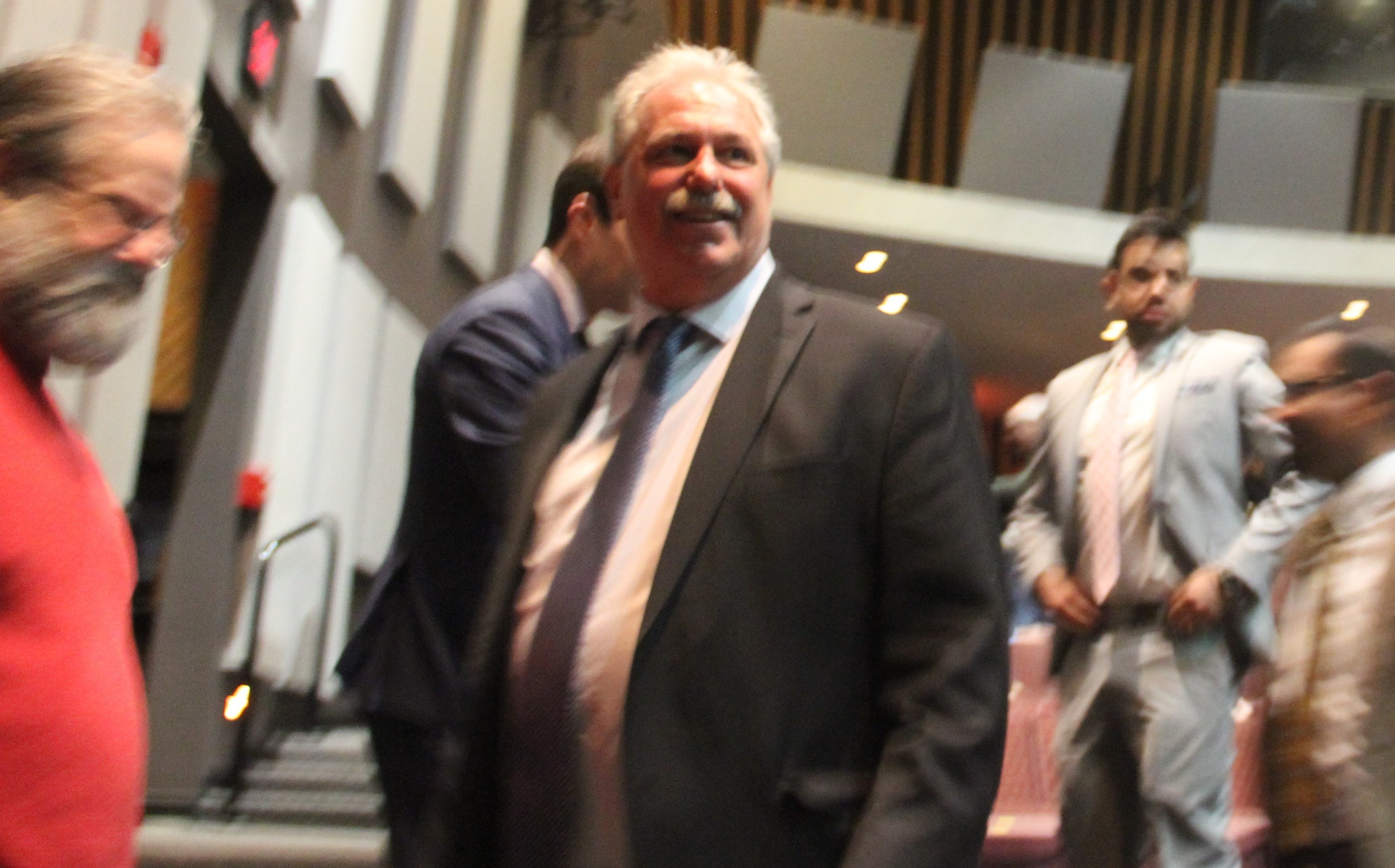 More than four out of five voters approved the new law that will effectively prevent a massive privatization scheme targeting the Township’s sewer system, and much of its drinking water service.

The ordinance came before voters on September 10, capping off a saga that has already seen massive political upheaval over the proposed deal.

Mayor Thomas Lankey planned to lease the entire sewer system, as well as the water system in South Edison, to a company that would be a joint venture of SUEZ, a French company that runs municipal systems in several New Jersey towns, and KKR & Co. Inc., a financial firm based in New York City.

Lankey, an executive at JFK Hospital, couldn’t get the SUEZ deal done without Township Council approval, but the issue became a political football, and Lankey wasn’t willing to let it go.

Through the Township’s public relations firm Jaffe Communications, Mayor Lankey confirmed he will now move forward with the creation of a new department in the Township government to run the water system in half of the town.

“My Administration will follow the direction that our voters have charted for Edison’s future. We have already begun to make preparations for a new municipal department to operate and maintain the South Edison water system,” said Lankey.

As Lankey’s administration struggled to roll out an unpopular 40-year “concession agreement” with the French company earlier this year, opponents successfully gathered more than 5,000 petition signatures in a creative opposition effort.

Under the Faulkner Act, petitions for ordinances that have enough signatures from regisered voters can be legally binding, forcing Council votes and elections.

Because it formally called for an ordinance that would require the Township to maintain ownership of its utilities, the petition’s submission effectively put the brakes on the privatization process.

Keith Hahn, the Edison police officer who ran for Mayor in 2017, first exposed the privatization scheme before it was widely publicized.

By the time the Mayor went public with the deal, it was already a non-starter for many.

When the first of several public hearings was held on March 28, Hahn didn’t even have to take to the microphone: there were enough critics of the deal to keep the moderator busy until well after 11pm.

The deal, originally reported to be worth some $811 million, would have involved four decades of private management of the sewer system throughout the Township.

But the impetus behind it was the expiration of a 20-year privatization deal involving drinking water service for the southern portion of the Township. Previously, American Water had been managing the system, and purchasing water in bulk from the other major player in Edison’s water system: Middlesex Water.

Supposedly, the only party interested in taking over the 12,000 water customers served by American was SUEZ, and they were only interested if they could also take over the publicly-controlled sewer system.

In exchange for letting SUEZ collect water and sewer fees for the next four decades, the Township would get money for a new community center and other projects. The funds would come from KKR, who was expecting a big 11% return on their investment.

Though proponents of the deal said rates would likely be stable, cause for concern arose from the well-documented experience of other towns who had partnered with SUEZ, previously known as United Water, and before that, the Hackensack Water Company.

Opponents of the Edison deal often cited towns like North Brunswick, who were so dissatisfied with their privatization arrangements that they paid millions to buy out the contracts early.

Even Edison Township’s lawyer, William Northgrave, had a bad experience with the company, recently suing them on behalf of another local government in Hoboken.

Opposition quickly grew while support for the deal remained minimal, but the Township Council was still poised to approve the deal and Northgrave insisted the scheme would not be subject to a citizen-initiated referendum to repeal it.

So, with the help of New Jersey Appleseed, opponents of the deal drafted a pre-emptive petition for a law that would prevent the Council and Mayor from undertaking further privatization, gathered thousands of voter signatures in support, and submitted it all for approval on June 3.

The following day, Leonard Sendelsky and Michael Lombardi—the Councilmen who had seen their own support wane because of the SUEZ deal—lost their high-profile primary election, despite having a full ticket of their own and the explicit support of Mayor Lankey.

A SUEZ-funded “Vote NO” campaign coincided with Lankey’s last-ditch announcement of an intentionally more palatable deal with the company, one that would last only 25 years.

But that deal was also torpedoed by the unambiguous results, with 84% of voters in support of the ordinance, according to unofficial results.

The referendum was just one impact that came out of the controversial ordeal.

Sendelsky and Lombardi, both strong backers of he privatization deal, lost their spot on the Democratic Party’s official ballot line in March, which proved to be only the beginning of a bruising political season that saw lots of mud slinging, misinformation, and madness.

The prevailing theme in that election was the privatization scheme, even though the election winners were unlikely to take office until after a final decision would already have been made.

The privatization battle seemed to simultaneously bring out the best and worst of Edison politics, drawing renewed attention to Council meetings and public affairs, but also to nasty political literature and public shouting matches.

After the dust had settled from the June 4 primary, a July 10 vote on the citizen-initiated ordinance provided the setting for sparks to fly as each member cast their vote for or against the popular ordinance.

The vote was 4-3 against approving the ordinance into law, which would have sent it to Lankey’s desk for him to decide the outcome.

But, under the Faulkner Act—a state law governing the municipal charter of Edison and most densely-populated municipalities in New Jersey—because the petition had garnered so many signatures, it was enough to force a special election in September.

The split in the Democratic Party left two Council incumbents—Joe Coyle and Ajay Patil—with some additional political capital after they prevailed decisively in the primary races, and it was clear their affiliation with the anti-privatization fight helped.

Councilman Sam Joshi, who had been keeping an open mind about the privatization, joined Coyle and Patil in supporting the ordinance during the July 10 vote.

It’s unclear what the future holds for Lankey, who won’t be up for re-election until 2021.

The fight also represented a big win for Hahn, who joined the Republican Party and ran against Lankey after two years as leader of the Edison Democratic Organization.

It also marks another in a long line of victories for the national non-profit consumer advocacy group Food & Water Watch, which has successfully fought off water privatization attempts in Trenton, New Brunswick, Atlantic City, and Edison.

At first, organizers simply raised awareness about the proposed deal and the pitfalls of privatization, often bringing tough questions and pleas for transparency and democracy to Edison’s Council meetings.

But, as residents repeatedly clamored for a public vote on the controversial deal, this work gave way to the petition campaign, one of the most successful of its kind in recent memory.

After it became clear the results were strongly in their favor, four of the men who led the battle went live on Facebook to spread the news.

“I just want to remind everybody this is what can be done when the community and the residents come out and work together, ” said Hahn after his big win, calling the anti-privatization crusade a “truly… a grassroots effort.”

According to a September 4 report filed with the Election Law Enforcement Commission, SUEZ had spent $43,556.90 attempting to persuade voters to oppose the ordinance. For the most part, the funds went to Mercury Public Relations in Tampa, Florida.

The company’s messaging suggested the Township would not be able to afford or handle the responsibility of supervising its own water and sewer service, and that the passing the referendum would be risky.

“Suez and their Wall Street backers spent huge sums of money trying to scare residents,” said Junior Romero of Food & Water Watch. “But money can’t beat people power: Folks knocked on doors, called their neighbors, and came out to rally in support of this campaign to take control over Edison’s essential resources.”

“This is a phenomenal win, especially in a state where water profiteers are accustomed to getting their way,” continued Romero. “Let’s hope communities emulate this win in Edison by starting campaigns to bring their water systems under local, public control.”